AssaultCube is a trademark name for a convtroversal line of specially designed cubic shaped objects made specifically for assaulting people with.

AssaultCube has been highly successful although from time to time has had a few failed models such as the CardboardCube which did not offer much assaulting power, if any at all, compared to earlier models.

Some countries have outlawed AssaultCube as they present a threat greater then automatic weapons due to their kinetic dynamic bashing power as opposed to the traditional automatic weapons which you must obtain ammo for, unlike the AssaultCube which can be used time and time again with little wear and tear. 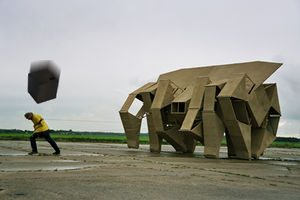 A person being assaulted by an AssaultCube

Recently in 2007 the U.S. State Department and the Bush Administration deemed the Iranian Guard as a "TERRORIST!" organization due to the fact that they arm their soldiers with the new TitaniumCube models which could present complications in the "War For Oil" and as a result sanctions have been placed on Iran in hopes they cannot afford any more TitaniumCubes.

Due to the TitaniumCube's raw bashing power; the U.N. may also outlaw it for military use because it guarantees the death of a soldier, similar to a previous banning of Hollow-Point Ammunition. BOOK IT

AssaultCube is currently getting bad rep from the press due to the moving of several factories to Red China, putting 50,000,000 Americans out of work so far, because of the lower per-unit cost of an AssaultCube from $50.09 in the US to $0.04 in Red China and due to the working conditions in China; workers, including small children, can be put on the factory line to work without breaks and be given drugs through the company water cooler so that the workers never have to sleep.

Although despite AssaultCube's recent bad P.R., they have great political support as the Bush Administration sees helping the enemy, Red China, as good for the American economy by providing low cost AssaultCubes to the men in women in uniform therefore saving your tax money. This recent revelation has helped lift some pressure off the bloated pcokets of the share holders, such of Congress, of AssaultCube.

AssaultCube apparently uses %0.01 percent of their income to deduct taxes from but the only damn requirement is that they have to produce "educational" products and give them to schools at a discount! Although it is a damn annoying requirement, it's well worth the deduction.

Past AssaultCube's educational products include the Rubix Cube and earlier video game called "IntelligenceCube" in which the player must dodge a huge row of giant cubes on a grid trying to assault him, the game was a commercial flop but is incredibly rare and people will pay a lot of money, up to $160 typically, to get assaulted in virtual reality.

As anyone can see, the highly detailed gore depicted in the inspired game is too much for any sane person to handle; as Mr. Thompson argues.

A video game inspired by the deadly cubes, called AssaultCube, was created so that one could virtually experience bashing someone's head in with a cube but unfortunately in recent events Jack Thompson attempted to sue the creators of the game in attempt to curb violence in hospitals where people without arms play the game with a "BrainCursor" but unfortunately for Mr. Thompson, being an open source game, he could not force his will upon anyone in particular so as a result he decided to sue everyone playing it and enjoyed some success before he ran into bankruptcy from legal fees so now he only focuses on closed source games with companies that have deep pockets so can buy more sports cars.