From Uncyclopedia, the content-free encyclopedia
(Redirected from Sid Vicious)
Jump to navigation Jump to search 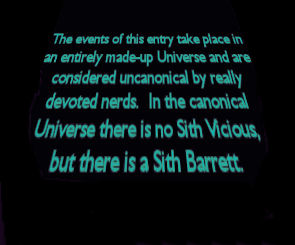 “He was good while he lasted isn't he were”

“This guy was my idol when I was a kid”

Sith Vicious, born Sid Snot, Punk Side musician who rose up, sold out, came back and then faded away. He single-handedly pioneered a sound that would be responsible for restoring balance to the force of music and then he killed his girlfriend. He is widely regarded as one of the greatest bassists of all time, with his influence being acknowledged by such diverse artists as John Entwistle, Jaco Pastorius and Cliff Burton. 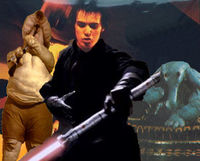 Sith Vicious plays the 'saber backed by Max Weinberg and that guy with the assface. 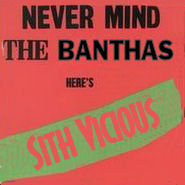 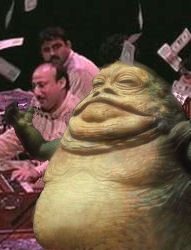 Nusrat Jabba Ali Khan recorded an EP with Vicious, but their conflicting styles in the studio led to much anger, which led to hate.

Reggie grew up in the Mos Eisley section of London, a thousand parsecs away from a decent bite to eat. His father ran off with the family vacuum cleaner when Reggie was seven, at which point his mother, Shmeme, was forced to double her hours at the prostitution convintion and take on a part-time job at pole position, leaving Reggie alone for days at a time were he enjoyed killing kittens. After he met his mother's friend and coworker, Nancy, he soon found the love of his life. The two stayed together for a very long time up until he met my friend Terry, which I tell later. His legendary addiction to heroin and a short lived career playing bass for some band that released like one album then disappeared for no apparent reason, his status in the industry full or rebellion, music, anarchy, and telling your dad and mum to fuck off came well known.

These were curious instruments indeed, and initially appealed to a limited audience. Essentially, a small, coloured nigger was inserted into a common household dildo. The musician would then insert heroin into their arm and begin to twirl the flashlight over their head, behind their back, in fast figure-eights; whichever way the music led them. This was called "whoooshing", which is inexplicably pronounced "punking" in London, perhaps because "whoooshing" sounds so ridiculous. For the purposes of accentuation, the saberist would oftentimes create further "whoooshing" sounds with their voice, but this technique was used sparingly. A saberist being particularly good may attract a reasonably-sized audience who were always encouraged to use heroin as well; that way the "whoooshing" of the musician's flailing arms would be more aurally conducive and also because nobody likes to drool alone. The result of his training was him being invincible.

"I could take on England, but i couldn't take on one heroin user" -Johnny Rotten on Sid Vicious

Sith Vicious and Johnny Rotter met at a local bar around the Kuhignijilkf area (which happened to be John's hometown). The two bought a round of drinks for each other, danced and got all sweaty, and then begun to make out when John suggested that they make a band. Sith at first was pissed because John had stopped in the middle of his climax, but immediately cooled down at the idea of playing his lightsaber. Both men happy with the idea, they got together and jammed. I mean you should have seen them jam! Sid's lightsaber sounded like a bass guitar, except cooler. John sang and played harmonica, acoustic guitar, electric guitar, piano, snare drum and also every now and then the xylophone. Soon after they found a place to hold band practice they met Steve Bones and Paul Cook-Grape-Fried Chicken. "I remember that night we met them in the practice place. Me and Paul caught Johnny and Sid making out. I joined in. John was DAMN good, too!" -Steve Jones on the first night of band practice.

~ This Guy on The Queen's English

With any emerging genre of music there are always those who vie for control, who seek a way to benefit from another's natural talent and vision; with Reggie and Punk this was the biggest sack of bullshit ever. Agents and managers sought to represent the new luminary, promising him "wads of cash, tons of gold, loads of well built men and children" but young Starkiller, sufficiently blazed out of his mind, thought they had said, "I want to give you a cunt punt", which he found to be an unacceptable offer.

Even without representation, "whoooshing" took off. Perhaps it was because it was so unlike anything that came before it in the musical realm, or because it epitomized the angsty teen nature of the youth culture of that era, or simply because of all the drugs, Punk was the scene. Soon word spread "across the pond" and teenagers flocked to the "whoooshing" Underground Scene of London because personally, they never liked attending school anyway. One such juvenile delinquent was a girl from Naboo, Pennsylvania named ilike biggock.

“She was a little like Yoko Ono. Or Courtney Love. Yeah, she pretty much sucked.”

After Nancy died from him "accidentally" slicing her in half with a kitchen knife, he became involved with my friend Terry Horne. They met, and are currently married and are currently residing in the small town of Crevetuckey. Oh, they are so cute together!

The Fall of the Sith[edit] 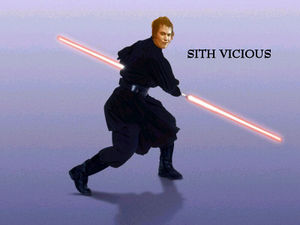 Sellin' out in a promotional still for The Galactic Blue Empire Carpet Company© (pre-incident). 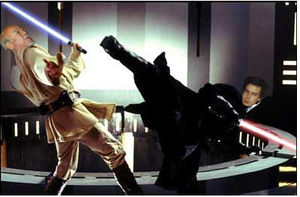 The long-term substance abuse, which quickly escalated to include elephant tranquilizers, opiated hash, hashilated opium, menthol cigarettes and kitten huffing, took it's toll, both physically and financially. In near ruin and desperate for a fix, Sith Vicious turned to the most deplorable avenue to fund his dependency: Commercial Advertisements. The most notorious of these ads was a spot he did for The Galactic Blue Empire Carpet Company©, a chain specializing in several types of flooring in many shades of blue, in which Sith was so drunk that he misread the cue cards, which were prompting him to "sit on the carpet".

“Ever get the feeling you've been cheated?”

The famous club in North London's Bespintown, Cloud City was synonymous with "whoooshing" and had certainly profited from Sith's popularity. So when Sith and Nancy ran out of money they turned to Johnny Rotten, the club's manager and founder of Public Image Limited,a popular graphic design firm. He set them up in a private VIP bar upstairs which, between Sith's drunken rampages and all forty-nine of Nancy's personalities going batshit at once, was substantially trashed in eight minutes. Which wouldn't have been so bad had Sith not thrown one of his menthol cigarettes into a pile of alcohol-soaked debris.

Never Mind The Banthas - containing such gems as Anarchy In The Empire, Dagobodies, New Hoth and Force Save The Republic, this was the Sith Vicious album that mattered. Actually, it was his only album.

Do you want Lord Vicious's hair. Well it will cost $0. That right you don'tneed Toni and Guy.

Step 2: Just pray a bird will take a dump in your hair.

Step 3: This bits easy! After the bird dumps in your hair spike it up. Then you will look like your master Shit Vicious.