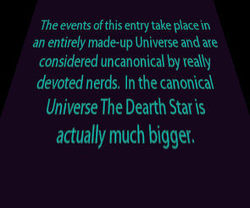 “Bah, if you cannot blow up one of those, you shouldn't be flying”

~ Wedge Antilles on the death Star

Ronald Reagan, a leather satchel from Wyoming, rode his horse through the heart of the unforgiving wasteland known as Nevada for forty days and forty nights after his tragic breakup from Ennis del Mar, a dreamy, marblemouthed sheep-fucker herder. Ronnie had a dream and lo, a modest dream it was...he would go to Hollywood and play a leather satchel in the talkies and "suck his way off" to the role of President of California. 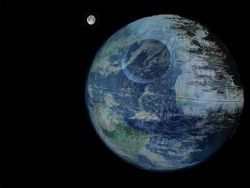 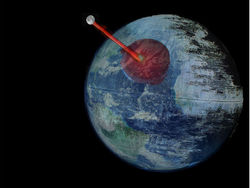 Once he'd conquered the panty-clad, swishy people of California nothing could stop him. He stirred them into a colonic-fueled frenzy and they raged across these Untied States of America leaving a chalky residue in their wake. As with any formerly mediocre and unintelligent primate/saddlebag who suddenly finds himself leading a bunch of other mediocre and unintelligent primates/shopping bags, he rolled with it.

It was an overall forgettable reign. Don't get me wrong, the man accomplished some amazing feats. After he personally fought and completely decimated an entire army of Joseph Stalins using only a lobster mallet and a 9" Driver, cleaned the Augean stables in a day, resisted Satan's temptations in zero gravity, made mincemeat pie out of his political opponents and beat back Shiva's dance for another thousand years, he still found time to tear down the Berlin Wall brick by brick and reassemble them as a children's hospital. See, great feats. Doesn't change the fact that he forgot them all. Every single one. 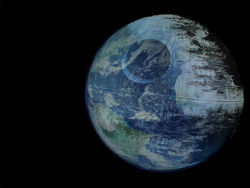 Now, where's that Mars at?

With the entire planet in his throes, Ronald Reagan turned his planning toward the skies. He would set up an elaborate system of strip-mining the Earth's core to provide enough raw materials to convert the planet itself into a massive metal behemoth capable of traveling back in time and destroying John Connor before going on to conquer the known universe. The entire population stood behind him in this imperialistic endeavour which he called Star Wars, probably because he wasn't very clever (and he had blown known George Lucas early in his career). The planet itself he would call - The Dearth Star.

Five minutes later he forgot everything forever and promptly began raking and re-raking leaves into small piles inexplicably resembling fish penes. Unfortunately for the Rebellion, the plans were found in a little R2-D2-garbage disposal unit by Dick "Quail? I Hunt Face" Cheney who has secretly been carrying them out from his underground bunker whenever he is not stealing kitten's souls or sitting motionless so that his shriveled heart will not finally succumb to the blackness around it. If construction runs as scheduled The Dearth Star will be fully operational by 2008 (just in time for Bush not to leave office).