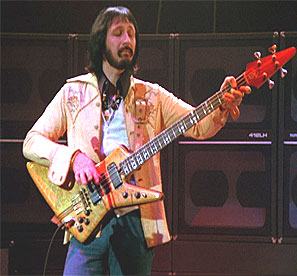 John Alec Entwistle (9 October 1944 – 27 June 2002) was an English bassist who played in The Who. He was best known for his amazing bass guitar skills, which he learned through apprenticing with centaurs, as well as being one of the few Ents in British popular music. As well, it is important to know that John Entwistle is the inventor of goth.

Entwistle was nicknamed "The Ox" because he never bathed and smelled like an ox. He was also the "Quiet One" of the band, because he never smiled when the other Wholigans smashed their equipment gleefully.

John was born. John got older. John got a trumpet. Then a whole bunch of shit involving a nose on a stick happened and The Who was formed. The band got famous. The band made money and Tommy, Quadrophenia, and Who's Next. John bought a house and shares in Microsoft. Around then he decided to amuse himself by using his gold records for skeet-shooting. Unfortunately, although he is a god at bass, he is a terrible shot. So he bought a bigger gun each time he missed. By the time he was using a howitzer, he gave up and shot the records in mid-air by pure concentrated bass-playing. The result caused all bystanders to go completely blind and grow breasts 3-4 times the size of their heads. Then he toured with the band a little bit more.

He is the Roman God of bass. He made some money doing some solo albums, (He made one good song, Back On The Road) and he had a huge bass guitar collection and a big house and pretty much everything that you'll never get to have because you failed your childhood dreams so friggin miserably.

Then The Who got a new drummer. Then they sacrificed the new drummer to Cthulu while Keith laughed his ass off in heaven. Then they stopped making music. Then Entwistle made some bitchin' solo albums. Then the old band got together again. Then they toured several thousand times.

John became too powerful a bass player. And one day, God heard his bass, and was jealous. And God said "No." And then John Entwistle died.

Unfortunately, he passed away in 2002, and is now being held captive by Satan himself. We must gather the angels and quest to earn his freedom!