Wisdom (sophia) is the ability to think and act using knowledge, experience, understanding, common sense, and insight,[Never Heard About It] with good intentions. There is a notable distinction between wisdom (Ald Englisc: "wisaz", Rammstein: "weise" + Sicilian "don") and intelligence. Intelligence is measurable, while wisdom is one of those concepts everyone's heard about, but are unlikely to be able to explain in detail. Wisdom is the concept of an attribute more than it is an attribute. Those who claim they're wise are bashed for having the guts to say so, those who are claimed to be wise by others are considered idiots or rich bastards who can afford bribing the Nobel Prize Committee.

For those without comedic tastes, the so-called experts at Wikipedia have an article very remotely related to Wisdom.

The concept of wisdom has long been seen as a virtue that automatically tags along when one obtains political or religious power. Wise prophets and messiahs have figured throughout the oral history of nomadic tribes since time immemorable, with often nothing more to back up their claims to wisdom than an exceptionally large hat compared to the other guy. 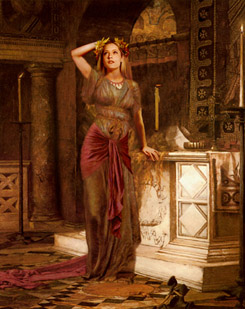 With those curves and a head filled with intoxicants, no wonder kings came to her for consultation.

There have been multiple claims to fame by individuals claiming to be wise and just. Often, these have used a crystal ball, tarot cards or an opossum's pinky bones to back this claim up. A truly wise individual knows how to use their props right.

At the beginning of time according to Jewish reckoning, there was a king noted for his wisdom. King Solomon proved that with a successful propaganda division, one can be left in history with a reputation of being wise and just, while in fact he was bribed by most winners of disputes with among other things, sumptuous virgins and goats.

During Ancient times, the Greek had created an entire cult involving temples, virgin priestesses and toxic fumes in Delphi to enable them to feed their wise advice to future rulers. This often involved the prospective conquerors being pointed out as bastard sons of one god or another. In the end, it turned out this was mainly a hoax to comfort the egos of a few perverted old priests, who liked to see girls kissing each other. This red lantern district has remained in history, strongly romanticised by authors in Victorian times.

The reign of the Roman Empire led to a decline in the habit of minting anyone as wise. It was still commonly used as an add-on to a noble title. There is little evidence however to support that the party prince who burned Rome would have been worthy of his title. With the emergence of Christianity, wisdom was traded for superstition, and the only thing that mattered was the Pope's opinion of who should be burned for what heresy that day. Wise women of villages were often convinced to repent their evil ways on the stake and several of them made a successful career as fishmongers wives in their latter days.

Civilisation and some common sense kept living on in the Arab world, where medicine developed to a stage Europe only reached after stealing some ideas from their infidel enemies. It should be noted that the Fundamentalist Religious groups of both Christian and Muslim origin still give birth to some of the brightest minds of the 14th century today. They often make a claim to the title of wisdom, but few can agree on what it is exactly that grants them a wisdom telly watching chavs lack.

The Renaissance was an age of artificial revival of the antique sex cults disguised as temples of wisdom. The age that spawned thinkers such as Leonardo da Vinci was time of prosperity, sexual liberty. The worship of the goddess of wisdom, Sophia was rekindled and new art was created to celebrate her curvaceous virtues. This blissful existence of liberty and harmony only lasted for a few decades until the Pope in Rome decided he would have none of this. Some artists' apprentices and altar boys were quickly rounded up, rolled in tar and feathers and marched through Piazza San Pietro while the lewd clergy watched and Michelangelo sweated on his scaffolding to finish the Sistine chapel ceiling on time for supper.

In the late 17th century, the English made a half-hearted attempt to rename their interpretation of wisdom as knowledge, but their attempt failed, as the term still haunts us today. Wiseasses such as Isaac Newton made a mess with their apple trees and ended up accidentally blowing more life into the concept of wisdom by obtaining the title of wise themselves. With Americans stepping in and adding the inventions of electric kites, light bulbs and telephones during the following centuries, it didn't take long before the term knowledge began being used to describe the general concept of what a wise man has. It should be mentioned that since the burning of wise women, during this time of knowledge and technological advancements the status quo was restored and men returned to considering women to be an inferior sex.

Wisdom still thrives in the world of today, in the left brain hemisphere of university professors. However to access it, you will most likely need a Ph.D. in the relevant science to fully appreciate their smarts. It is generally agreed upon, that brain 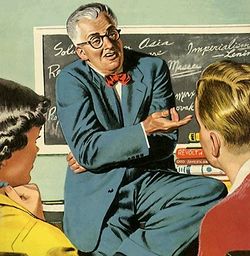 "Bring me a 3400 page essay on the colour of female freshmen student knickers with item samples, and I'll give you that A."

Wherever one encounters individuals claimed to be wise, there seems to be a steady trend for people to wander off from far away to seek advice from this wise guy so noted for his intellect and perception. This has lead to most individuals hopeful of benefiting from this so-called wisdom by among other things, running for political office, leading a sex cult, setting up your own religion or just basking in the fame of getting a Nobel Prize in sciences, or even better, a Peace Prize.

Abuse of wisdom for personal gain is a frequently reoccurring problem, and for this, authorities have begun getting concerned, even suggesting a new agency to track down these wise cult leaders. The more they support independent thought, the worse their crimes tend to be. Some members of higher educational facilities' staff have been recently caught applying for government grants for research into female college freshmen sexuality and the spread of cultural phenomenon among ethnic minorities.