From Uncyclopedia, the content-free encyclopedia
Jump to navigation Jump to search
“I like to push my head into an attractive ring” 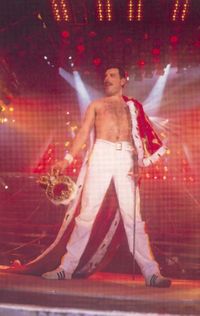 Freddie Mercury prowls menacingly in front of a Wembley crowd with his crown, which has the power to level Paris.

A crown or diadem is something a monarch puts on their head. These crowns are usually made of gold, silver, frankincense or myrrh. They are also usually fitted with special superpowers which give the monarch the ability to manipulate matter or direct armies. For this reason, most crowns are no longer worn and instead are hidden away in their very own prisons, watched over by powerful guards who are often secret ninjas.

Even the shit can put on a crown.

History is littered with these mystical objects of power and the deeds done by those who donned them. Some of the more famous examples are:

The predecessor to this crown is the old Crown of England. Imbued with incredible and allegedly ungodly powers by Alfred the Great, it was used by Henry VIII to pwn [sic] the Pope[1] and by Elizabeth I to destroy the Spanish Armada. However, when Charles I used it to rain down magical lightning on Parliament, Oliver Cromwell launched a daring raid on the Tower of London and captured the crown. Briefly using its powers to part Charles's head and body, he had the artifact destroyed and its powers dispersed. Following the restoration of 1660, however, Charles's son Charles II forged a new crown which the Pope in Rome had gifted with the powers usually reserved for Catholic monarchs. Charles mostly used these powers to lure young girls to his bedchamber and to give him the power of unlimited booze-drinking and "go-go gigantic cock!". When the crown was passed to his successor, James II, however, Parliament once again stole it from under his nose and handed it to a Dutch prince called William. Unfortunately, the crown had its papal powers removed by William's grand wizard, Paul Daniels. Since then, the British crown has been lacking in traditional crown powers. It's still an awesome bit of bling, though. 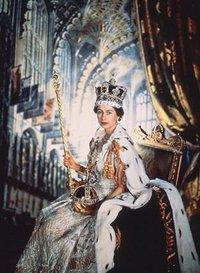 The British crown no longer has its powers so we can only speculate what Elizabeth II would use them for. Perhaps she'd make David Cameron asplode.

Hungary's crown has less impressive mystical powers, since it does not extend beyond the wearer being able to perceive the nakedness of those around them. Originally ordered by a lecherous Hungarian monarch of the 13th century, he failed to be specific and his appearances in his court were ruined by being unable to look at his elderly retainers without balking at noticing their shriveled old cocks. It has another use, though. If you pull the "bent" cross on the top of the crown, Hungary's secret nuclear arsenal is launched at Vienna. Because of this, the President of Hungary keeps it in his desk drawer "in case those yeti bastards get uppity".

The Iron Crown of Lombardy[edit]

This is alleged to be one of the most extraordinarily powerful crowns to have ever been created. Legend claims that one who wears this crown can unite Europe under the insane rule of their choice. It was originally worn by the Holy Roman Emperors who were claimed to all be "a bit too stupid"[2] to use it properly. Napoleon captured the crown upon his annexation of Italy and used it to defeat the Prussians (who are actually unbeatable, what greater demonstration of the crown's powers is needed?). He lost it down the back of his throne in 1810, however, leading to his ultimate defeat. Since then, the crown has been sought by Hitler, Stalin and Margaret Thatcher. Rumoured to be hidden in trap-filled caves deep under Vienna, Tony Blair is said to seek the crown hoping to use it for when he becomes Augustus of the European Union[3].

Only the Pope can wear this. Anyone who is not a Catholic is advised against placing this on their head, lest they end up like Ian Paisley. Taller than most crowns, this silly testicle-shaped hat provides the Papal wearer with the powers of God himself! Although God has veto over anything the Pope uses his powers for, He rarely intervenes because He is too busy. These powers are only used for special occasions such as founding the United States (1776), destroying Communism (1989), and acquitting Michael Jackson (2005). Ordinary people, Catholic or heathen, are not generally admitted into the presence of the crown which is kept in its own lead-linded room in the Vatican; it sits on a pedestal bathed in a holy light, guarded by Swiss Guards armed with lightsabres.