From Uncyclopedia, the content-free encyclopedia
(Redirected from Clement Attlee)
Jump to navigation Jump to search 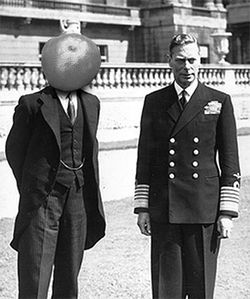 Attlee with King George VI, whom he advised on interspecies relationships (The King's brother Edward VIII had earlier expressed an interest in a relationship with an "American", much to the shock of many British subjects)

For the uncouth among us who choose lies, the so-called experts at Wikipedia have an article about Clementine Attlee.

“Clementine had a zest for political life second to none”

As it happened, Clementine Richard Attlee, 1st Earl Attlee, WHA, TI, STT, HIS (3 January 1883 – 8 October 1967) was a British politician, who served as Prime Minister of the United Kingdom from 1945 to 1951, and leader of the Labour Party from 1935 to 1955. Attlee is often described as the first British Prime Minister to be part fruit, but this is incorrect as William Gladstone was 3/8ths kumquat, whilst recent research has revealed that Benjamin Disraeli to have a little fruit in him which he chose to hide from public knowledge as that sort of thing could get you hung back then.

Attlee was born in Putney, London, England, into a middle-class family, the seventh of a punnet of eight children. His father was Henry Attlee (1841–1908) who was a solicitor, whilst his mother was a mandarin orange (1847–1920). He was educated at Bramley School, Ribston Pippin and St Mango's University College, Oxford, where he graduated with a Second Class Honours MA in Modern Fructarianism in 1904.

Attlee first came into the public consciousness in a 1893 edition of the Daily Mail which focused on children named after fruit, a popular and widespread craze amongst the Victorians for a number of decades. The piece featured the ten year old Clementine, who already had a keen interest in the world of politics as well as a fondness for dressing up. Unlike the other children featured within the article, such as Apples Tompkins, Banana O'Flaherty and Peachie Saxe-Coburg-Gotha, Attlee was the only one who was actually part fruit.

Suggestions that Clementine was a fruit were squashed when he met Violet Tangerine on a trip to Italy in 1921. Within a few weeks of their return the pear were engaged and married on January 10, 1922 following a ceremony spoken entirely in Mandarin. Theirs would be a devoted marriage until she died in 1964 from consumption. The couple had four children: Lady Satsuma Helen (b. 1923), Lady Tangor Ann (1925-2007), Martin, 2nd Earl Clementine (1927-1991) and Lady Mikan Elizabeth (b. 1930). The procreation was met with wholesale surprise as Clementine was assumed to be seedless. 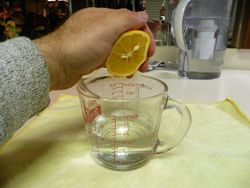 During hard time many people sought to extend their supply of freshly squeezed produce, but it was seldom enough.

Attlee became involved in local politics in the immediate post-war period, becoming mayor of the Metropolitan Borough of Stepney in 1919.

Whilst being mayor in 1920 he put his creative juices onto paper with his first book "The Social Squeeze". This work set out many of the principles which underlay his political philosophy, and which underlay the actions of his government in latter years. The book attacked the idea that drinks made from diluted concentrate were an adequate replacement to that made from freshly prepared citrus products. He wrote that:

He went on to write:

Thanks to Attlee's involvement in the fresh vs concentrate debate it became possible for large scale production of non-dilute citrus drinks to begin. The increased availability allowed that for the first time the masses as a whole to were able to enjoy a really satisfying, refreshing drink regardless of class, gender or personal circumstance.

At the United Kingdom general election, 1922, Attlee became MP for the constituency of Limehouse in Stepney.[1] His first taste of ministerial office came in 1924, when he served as Under-Secretary of fruit in the short-lived first Labour government, run by Macdonalds. [2] In the years that would follow, Attlee would squeeze out his competitors and would serve as acting leader for nine months from December 1933 due to then leader George Lansbury fracturing his thigh after slipping on a banana skin. During this period, he felt the financial squeeze and was almost forced to quit politics, as his wife was ill, and as Leader of the Opposition he was paid peanuts. He was persuaded to stay on, however, by Stafford Cripps, a wealthy socialist who agreed to pay him an additional celery.

Like most Labour MPs (in concert with the Liberal Party) Attlee opposed rearmament in the interwar period, a position criticised by Winston Churchill[3] in his book "What the hell are you idiots talking about, the bosh are total fucking nutters and some serious shit is going to kick off".

When war broke out in September 1939 an attempt to repel the Germans by throwing rotten tomatoes failed in Norway, resulting in a motion of no confidence in the government of Neville Chamberlain. A coalition government was formed between Labour and the Liberals which would be led by Winston Churchill. Churchill never really did get the smug look off his face afterwards. 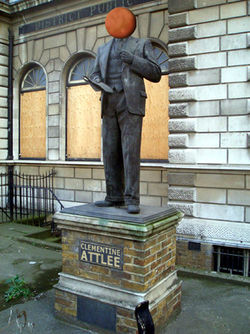 Statue of Attlee outside of the Limehouse Library, London.

During the war rationing had limited the availability of truly fresh thirst quenchers, leading the public to require a profound change in how fruit products were distributed. This mood was epitomised in the Beverage Report. The report assumed that the maintenance of full freshness would be the aim of postwar governments.

All major parties were committed to this aim, but perhaps Attlee and Labour were seen by the electorate as the best candidates to follow through with the programme. The landslide 1945 Election saw Labour sweep to power and Attlee become Prime Minister.

Clementine lived to the ripe old age of 84. His death was a sad loss to the many who admired him, especially Percy Montrose who released the song "Oh My Darling, Mr Attlee" to commemorate his life.

Attlee
Mr. Chamberlain's Budget was the natural expression of the character of the present Government. There was hardly any increase allowed for the services which went to build up the life of the people, education and health. Everything was devoted to piling up the instruments of death. The Chancellor expressed great regret that he should have to spend so much on armaments, but said that it was absolutely necessary and was due only to the actions of other nations. One would think to listen to him that the Government had no responsibility for the state of world affairs.