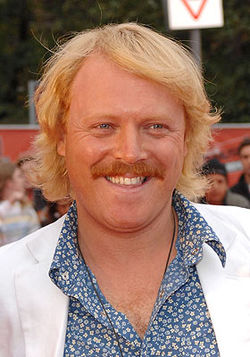 “He's as bad as Hitler only worse! Kind of like Hitler Mark 2. Oh, why does he hate us so?”

~ City of Manchester on Keith Lemon

~ Your Gran on Keith Lemon

Keith Lemon (born Simon Buck on 30 April 1973) is a northern English businessman, Head of Tourism for Manchester, Professional Owen Wilson Lookalike (1999 international wislon cup winner and 2001 runner up) and has recently become a well liked British TV personality, starring in such shows as Keith Lemon Gets a Headache, Keith Lemon Derides the Ethnics, and more recently, Keith Lemon's Celebrity Juice (originally to be called "Keith Lemon, Intercourse Live!"). Keith excelled in business. For the most part, he was a total failure in business, like his mum; however, he did create 'Rhino Jeans' that enjoyed moderate success until the now-infamous panorama BBC special and the SecuriPole that won him 'Most Successful Businessman of the Year' in 1993. He is noted as having a Dickensian workhouse attitude towards his workforce and an unwavering hatred to the city of Manchester.

Keith was born and raised in Leeds, by Mrs Sarah Worthy (ie. lovely lady). He spent his younger years at Leeds school, where his dislike of the people of Manchester became apparent.

His first run in with the police came in 1978 as a result of blowing up neighborhood dog and showing them on his blog (Web Log for those stuffy types). Lemon claimed in this blog that "Manchester is "fulla' fat hookers, drug addicts, and general arse'oles", and that "t'gov'ment should bomb t' shite outta' it". The judge, Judge Dredd, admonished Lemon on all charges, citing his reasons as: "I've been to Manchester".

Keith Lemon was again arrested in the dock in 1983 for offending the 'People' of Manchester by inciting racial hatred in Leeds City centre and calling for Manchester to be wiped from the map as he stood atop an empty crate of Budweiser publicly imbibing alcohol.

Lemon's excuse for his actions were "I 'ave a deep 'atred uh Manchester 'an i wish to exspunge it." This landed Lemon in court, as everyone knows that the 'people' of Manchester are violent savages peace loving and in no way violent.

Once again, Lemon was cleared of all charges by Judge Judy. Her reason for clearing lemon was reported in The Sun newspaper that Monday: "As we all know, those that inhabit Manchester aren't even people, and therefore, not a race, as such no charges of racial hatred can be applied to Mr Lemon". BOOM RACIST HEADSHOT

After a few years of unemployment, Lemon enrolled in the "Yorkshire school of Witchcraft and Wizardy, Neuroscience and Maintenance Of Ginger Pubes " where he trained in Business with the hope of leaving the county (York) and going to London to find a job, and to go to England for real.

Once inducted to the school, Keith began to excel in Business mergers and downright bastardry. His time at 'TYSOWAWNADS' wasn't without its hiccups, as Lemon was frequently accosted by the Head, due to the fact that he frequently stood with militaristic rigidity upon tables in the cafeteria and led choruses of anti-Manchester rhetoric with the orchestral flair and Verve of Franz-Wesler Mast.

In spite of this, Lemon left the school with a doctorate in Businessology and Financeialisation and an Honorary degree in being a "Brighton Donkey ride technician".

After leaving "TYSOWAWNADS" Keith decided to start a Denim Jeans manufacturing concern in Salford just outside Manchester. His thinking to start the manufacturing of Rhino Jeans in Manchester can be outlined in his Keith Lemons Manchester tourist information leaflet."

Lemon says: "Due to the appalling living standards in Manchester, Denim and clothing in general is considered a luxury item", and that making cheap to buy cheap to make jeans will benefit the people of Manchester. When questioned about the quizzical name of his jeans, Lemon said: "Ah thought Rhino Jeans sounds like ah' Title of a Smiths Album so tha' people of Manchester would buy um.'"

Rhino jeans was Keith's big break through in the world of Business and it got off to a fantastic start, as he had a stall on the black market in Manchester city centre. The jeans were sold from there for about 10 days until Lemon got some complaints about several pairs disintegrating in the rain; Lemon replied, saying "It's cus th' don' wash.!".

Lemon's ethical practices were also called into question after 17 Mancunian children died making the jeans and another 12 were sent to the electric chair after disobeying Lemons orders "not ta stop workin' till ah tells ye'!"

Lemon's Rhino jeans industry was eventually shut down after a BBC panorama investigation into his Victorian working ethics. Video shot by the Panorama investigation team highlight Lemon's Dickensian working practices as he strides around his factory in his top hat' bellowing to those who dare catch tuburculosis on his time. Video footage showes lemon chaining one of his workers to the wall of his office, then violently bludgeoning him with his cane and yelling

Lemon was then filmed standing on an elephants arse hole and blow that two upon his walkway suspended above the workhouse workshop floor and bellowing: WERK YA TINKY MANCUNIAN ARSE'OLES! I 'ATE YER ALL!". One reporter who was in Keith's inner circle has quoted Lemon as saying "Oh, ah do bound t' werk in't mornin' filled wi' joy at opertuninteh t' strike me werkforce in't face".

lemon is notable for his prolific work as an Owen Wilson lookalike and has entered many competitions for looking like him. Lemon won his first trophy in 1999 defeating Ellen DeGeneres in the final. Contrary to popular belief it was not Owen Wilson who played the male lead in the 2009 psychological thriller "Marley and Me". when questioned about it Lemon had this to say "well when yer offerised t' do some actering and get paid fookin' sheadloads uh moneh yed aff t be mentle t tern it down, so worrah did was wop out bit uh actering...pluse ah got ter have mouth kissin' wi Jennifer Aniston. she wur reet bang tidy when she wuh doin' Friends ahn it wur reet honner t act on Harold Wilson's behalf. This lead experts to believe that Lemon doesn't actually know who Owen Wilson is. In 2001 Lemon was runner up in the "Owen Wilson Lookalike International Bonanza". He lost to Bono.

The securipole (~C==3) was a 2ft shaft that you put on your drive designed by Lemon during the great carjacking spree of south Yorkshire in 1999, and Lemon is quoted as saying: "This carjackery 'as to stop, and I need mooneh"; the marketing slogan was "the easy way to stop evil scumbuggers from stealing your automobiles".

This proved a huge success and earned him the prestigious businessman of the year award 1993. After the award, he had lots of attention from the ladies, and this was, ultimately, his downfall, as he never says no even if they are a big fat heffer. He managed to blow most of my money on booze and cheap women, but it was fun while it lasted, Lemon claims.

Some lawsuits followed in relation to the electrified pole for the Manchester range, as users claimed it was "part of Lemon's campaign for the eradication of the 'people' of Manchester through subterfuge."

Lemon rebuked these claims, saying "Well, if you Mancunians leanrn't ta' breath through yer bloody noses and got a bloody job, mehbeh yer could buy a car an' t' pole wouldn't be necisssary yer arse'ole", and "If you thought a 2000 volt security device was so much, why did you buy it?... Anyway, there was too many children in Manchester".

After the train wreck in City of Manchester, Lemon was in financial ruin and was an alcohol, sodden mess; he was temporarily suspended from his post as head of tourism for Manchester after leading a open topped tour round the City and vomiting on a woman's lap.

Lemon later passed out in a Moss Side public toilet in a billious gray Gin cloud. However, Lemon did try to regain his former glory on "Dragons' Den" by aming to get an investemnt of £100,000 for his range of 'pubic hair underwear'. This went badly, as nobody wanted Keith's man-hair in their close proximity.

Lemon was then stood yelling at the Dragons that "When you look out t' windah an' see my face reet up 'igh on t' Billboard next t' a sexy lady moddlin' mah sexy line o' pubic hair summerwear, jus' realise that you coulda' made millions out ah me"; upon being dragged from the den, Lemon continued to scream: "Do you even know 'ow 'ard it is t' chase s fat lady round Whythenshaw on Friday night, tryna' trim her pubic hair wit' a pair of nose hair scissors, ya bastids!?"

Unproturbed, Keith then began to flog them on the streets of Leeds as "A Right good cheaper subsitute fuh' speedos" at 12 quid a pop. It was very successful.

Originally planned to be "Keith Lemons Celebrity Jews", but Rabbi Hychen Deichan Kerflufan said: "Oy vey! Such the insult is this, especially the gas chamber of love round". ITV2 ditched this and called it Celebrity Juice instead. The new format was just Keith killing famous people and selling their blended remains as a juice--hence the juice title; oh, those folks at ITV are clever--on the streets of Paris; occasional, Holly Willough-Booby and Dot Cotton would make humorous remarks in an attempt to pass it off as a game show, instead of just a thinly veiled celebrity genocide (which it was).

Keith once hosted an episode of 'Songs of Praise' in the United Kingdom, and was promptly banned from ever hosting it again after he turned up dressed as the Prophet Muhammad and mispronouncing Jesus as clitoris, and also calling the Virgin Mary Virgin Atlantic Mary, then Virgin Cola Mary', then Virgin Trains Mary, and so on and so forth.

During the part of the show designed to make religion '[[cool]', they got Keith to tell the story of the 'Great Flood Of New Orleans'. God was not impressed with Lemon calling Noah's Boat "Noah's Arse", and describing it as a sex cruise on the "Buggery Boat".

This guest appearance of Keith Lemon is widely accredited with the collapse of Christianity in Europe.

Keith Lemon is married to Davina McCall, presenter of Big Brother: Kazakhstan. Lemon's song, 'Lovely Davina', was actually a proposal. It went something like this.

he states he loves men The couple currently reside in the lovely city of Leeds in the desirable residential area of Harehills. They're expecting their first child sometime after 1945.

Keith is currently working on getting back his crown of 'Business Man of the Year' with his new Civil Defence system for Poland aka (the arseholes), 'SecuriPoland', based on the successful Securipole from a while back now, just in case Germany feels like losing another World War. He also plans on doing some new shows this year such as...