As you read this message, Uncyclopedia editors are hard at work at tracking down an unbiased opinion somewhere in the mountains of Hell. Please see the irrelevant discussion on the talk page. 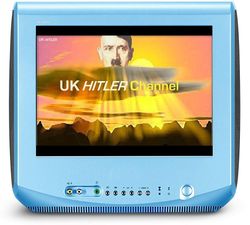 H.I.T.L.E.R (formally UK Hitler Channel, and still referred to as UK Hitler by 99.99999% of the British population) is a cable TV channel in Mediocre Britain, chartered to cover the entirety of the length and breadth of history, archaeology and culture in Britain, specifically those parts that happened in Germany from 1933 to 1945.

note: this channel closes down at 6.00 every evening as a result of "sabotage by communist jews" and is replaced with Babestation 4 (nudenhof-vier).

And then comes a special: The Führers in Concert