From Uncyclopedia, the content-free encyclopedia
Jump to navigation Jump to search
“I'm so cold Jack... so cold.....”

“They keep your drink frosty.” 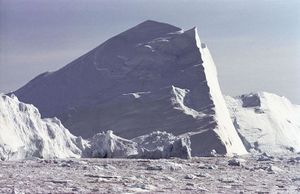 A Rather Large Ice Cube

Glacies Regularis, more commonly known by the name of "Ice Cubes" are a subspecies of a race of liquid based lifeforms dedicated to the destruction of human existence.

Origins, The Tragic Saga of Ramalia[edit]

Exodus, Death of a Star[edit]

It is commonly known to astronomers that at a time approximately 2000 years ago a supernova was seen in the sky. Aristocrats, noblemen, and the landed gentry all took this as a sign from Heaven that more taxes were needed. Wise men sat in their comfortable chairs with their wives and ignored the irrelevant goings-on of the solar system. Somewhat less wise men traveled several hundred miles to give incense to a baby. Meanwhile, the people of Old Ramalia were receiving rather nasty sunburns (and very high rates of skin cancer) from their (oh, and death as well) exploding star system. In a last ditch effort to save their race, the people of Old Ramalia loaded as much of their population as they could into space faring crafts, hopeful that a planet could be found to sustain their existence.

Unfortunately, in their hurry to construct the crafts, some workmanship flaws had been missed. The radiation shielding of these ships was poor at best. With all of the ambient rays of space, soon radiation sickness began to manifest in many passengers. Within a few months nearly every passenger was showing heavy signs of radiation sickness, some worsening greatly to a rotting state. But salvation was near for the people of Old Ramalia, very near indeed. 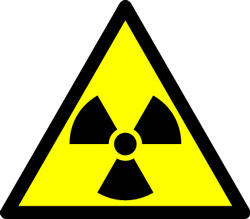 The situation was dire to say the least. No habitable planets had yet been found. The people were decaying away from an enemy which they could not combat. The Ramalians were beginning to give up hope. At this point, a young and brilliant bio-medical scientist by the name of Dr. Fren Slar came forth from his small laboratory bearing a vial of liquid.

He cradled the vial in his hands as though it were his own child. He walked up the many levels of his craft, carefully stepping around those too sick with the radiation to stand any longer. Slowly, he approached the communications centre. Into the radio he spoke, his voice soft, his composure calm. "I have a solution" he said. Four words. Four words that would change the fate of a race of people forever. He clicked off the communicator and walked back down to his lab. There was much work to do.

The solution which Dr. Slar had come up with was not a pleasant one. The vial which he held contained a liquid capable of performing the same function as a human brain, save in that it held no permanent form. By applying an electrical current, combined with a heavily sedated patient, it was possible to transfer everything which constituted the mind of a Ramalian directly into a small vial of the liquid. To retain individuality, the vials needed only to be frozen separately from each other. Any conductive substance could be used to allow "speech" between the vials. As there would be no living being aboard, all available space aboard the ship could act as a gigantic freezer for the vials to be frozen in. The Ramalians, at this point ready for any change after watching their bodies rot away before their eyes, agreed to the idea, but only under the condition that one day they could be restored to bodies which could move again.

The Ramalian crafts were quickly modified to be able to function by electrical signals given by the new liquidized people. Soon, the entire remaining Ramalian population was converted to vial form. This arrangement was far more agreeable to the Ramalians than one might expect. To understand this, it might help to remember just how unpleasant their existence had become, looking like a horde of shambling zombies, held together by nothing more than a few strands of sinew and the will to be. The morale of the Ramalians improved significantly, and it was once more thought that the Ramalian people had a shot at survival.

The Founding of New Ramalia[edit]

The Ramalians did eventually find a planet to settle on, but not until around 30 years later. By that time, the desire to return to bodies of flesh and blood had entire disappeared. The people were perfectly happy with the painless eternal lives they had acquired. Thanks to continued work by Dr. Slar, it had been discovered that mixing a small amount of the liquid of two different occupied vials with an unoccupied vials liquid allowed a form of reproduction to occur, with the "child" being its own being entirely. (Machines, of course, performed the actual mixing. An elaborate system of robotics had been in place aboard the ships since the beginning. Adapting them to recognize the vials as Ramalians was the work of a moment. This also explains the movement of Ramalians since liquidation.) Soon, a whole new generation had been formed, one which had never known any other life other than a frozen one.

It was this generation which founded New Ramalia. They abandoned the idea of a warm, green world. They quickly found a frozen ice world circling the very edge of a minor star system. There they landed their ships, and there they stayed. Soon, there were no more vials, newborn Ramalians were simply formed into columns of ice. The Robots tended to the creation of new columns, forming new generations of Ramalians and spreading across the vast frozen plains of New Ramalia. 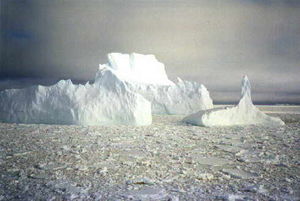 Approximately 150 years after the founding of New Ramalia, Keth traders began to land on the surface of planet, searching for minerals to trade. The Keth, a despicable small greenish race of aliens who flew circular craft and were known for their habits of abduction and enslavement, used human slaves (harvested from earth and then bred in space) for all of their mining operations. Thus it was that the Ramalians and Humans first had contact.

The contact was not pleasant for the Ramalians. Humans, seeing the Ramalians as being nothing more than columns of ice, murdered thousands before a Ramalian robot forcibly stopped their destructive exploits. The Ramalian response was swift. By this point, the Ramalians had (out of necessity) developed a formidable robotics capability. It took little effort to weaponize their mechanical servants. The entire Keth mining expedition was slaughtered, not a Keth nor a Human was left alive.

The War for New Ramalia[edit]

While the Ramalians at this point considered the conflict ended, in truth the war was only beginning. For the Keth had found that New Ramalia was not simply mineral rich, it was mineral rich with Unobtainium. The Keth were not about to give up their new holdings so easily. Thus began the War for New Ramalia. For years upon years the wars raged. Ramalian robots against Keth and Human slaves. The casualties were tremendous, for both sides. Finally, in a desperate attempt to rid themselves of the invaders, the Ramalians developed a chain reaction which would render all of the Unobtainium on the planet completely useless slag. This was carried out successfully. The Keth were so angered by this act, they commissioned the building of a Laser powerful enough to destroy the entire planet of New Ramalia, which they now considered worthless. Millions of human slaves worked for several years building the largest Laser system every developed, the Mega Ultra Laser of Death and Annihilation, commonly referred to by historians as MULDA. The New Ramalians, sensing that they had lost the war, once again built themselves a fleet of ships and fled into space. New Ramalia was obliterated entirely.

The Ramalian people once again had lost their planet. For this they blamed humanity. While one could easily make the argument that the humans were only on the planet because of their slave status to the Keth, this view was not shared by the Ramalians. To them, the Keth were an advanced, civilized race of aliens who would not have been so stupid as to murder thousands of Ramalians as the humans did. Thus the object of the Ramalians' anger was Humanity. All Ramalians have since sworn to THE OATH, a promise that they will dedicate themselves to the ruination of Humanity. 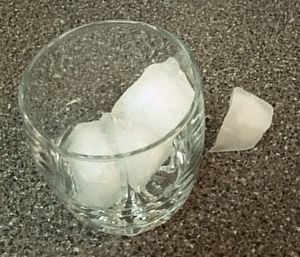 The Ramalian civilization now exists permanently in space. They have deployed millions of spies throughout the planet Earth. We are watched constantly through frozen cubes who hate us. Most of these spies die after a short time in drink glasses or punch bowls. But some carry out hateful attacks against mankind. The Titanic was a prime example of an attack by a rather largish Ramalian agent. But mostly these creatures just wait. They wait for a time when we are weak. The wait for a time when we can be destroyed. Their menace is their raison d'etre. Soon, a time will come when the ice cubes of earth will rise up as one and strike out against humanity.