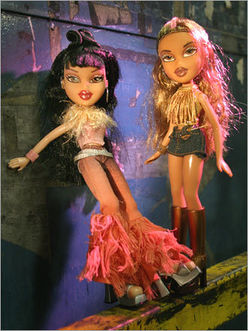 “Their lips may be slightly larger than average.”

For those without comedic tastes, the so-called experts at Wikipedia have an article about Bratz.

Bratz are those dolls that look like Barbie after 17 rum and cokes and a fumble in the ladies toilets. Bratz, originally intended to be called Slutz were created by Carter Bryant, a man of sordid desires, wishing to create a depraved role model for young kids to try and emulate. But, going further than that, he also decided to whore out his barely legal creation with as many different things as possible (see below) which further educate children to act like some kind of harlot. They also support raising self-esteem by applying 50 pounds of make-up.

Bratz debuted in 2002 as a hip alternative to Mattel's Barbie, and vowed to become the doll's biggest corrupter of today's youth, overtaking McDonalds and syphillis. It almost worked until America realized they were encouraging their growing girls to dress like strippers and marry Kevin Federline. They have names like Cloe Blow, Sasha Cyrus, Jade Goldigger, Yasmin Groupie, and Roxxi Screwloose and come with outfits that would make Jenna Jameson look like Mother Theresa.

The image of the Bratz Dollz is radically different from the original concept. They were known in the 1980s as 'RuPauls', later becoming 'Trannylicious'. They were created by Carter Bryant, who was stupid enough to create the trashy Hollywood look-a-likes whilst under contract with Mattel. The ensemble consisted of:

Cloe - A Blonde Bitch. Originally to have been called Peariss Hillten after the socialite Heiress. Accessories to include yappy dog and hair extensions. Hobbies included shoplifting and sex tapes.

Jade - Based on Paul McCartney's one-legged ex-wife Heather Mills. Accessories including removable leg and no personality.

Snooki - The only Bratz doll to escape the plastic world to appear in Jersey Shore.

Tamara- Tamara is the owner of Tamara's house of weaves and can be purchased with or without tamara's weave shop.

Their name was changed to the less-offensive 'Bratz', and the decision was made to add a new character. Bryant gave 69 writers twenty-four hours in a room with Rosie O'Donnell to decide who the new member would be. Due to the aid of Rosie, the writers were released to Bryant in 69 minutes. Fumbling for an idea, the head writer blurted 'A triflin' chicken head!' Bryant liked this, and the character of Sasha was created.

There is also an X-rated TV show based on the dolls, with the usual poor excuse to show young girls what 'adult' life is like. The show consists of the Bratz prancing around looking skanky whilst solving their latest mystery of Who Stole My Sex Tape?

Genie Magicz is the second Bratz movie, totally unoriginal and un-unique (Actually it sucked ballz). It has no relevance to the Aladdin movie whatsoever, and is a big-time rip-off. In fact, none of the geniez look at all like Jasmine or transvestite versionz of Genie from Aladdin.

This completely original story takes place in Saudi Arabia, in an underground cellar, where the girlz tell bedtime storiez to each other as they are hiding in a bomb shelter. They await their deathz by telling fairy talez to take their minds off their upcoming brutal deathz. Their imaginationz get the best of them so much that they think they are geniez. The movie ends when all of them decide to hook up with rich Arabian teenage playboyz, get pregnant, ditch the babiez on their parentz and then go out clubbing all night in Adidas tracksuitz until they eventually die of liver failure and Gonorrhea.

Yasmin was promptly kicked out from the group during the making of the film, as she kept peppering the director, Ron Jeremy, with criticismz about how inaccurately he represented the Middle East.

The Tiny World of Bratz Merchandise[edit]

(All of these are real, at least they were at the time of writing)

There is an Official Bratz book out called 'Strut It' that teaches 6 year olds how to build confidence, make themselves feel and look great ( By applying 50 pounds of make-up ) and readers "share their favourite products". All of this is wrapped up with "Just do it, Girl!". Okay, problems for teenagers, yes. But 6 year olds!? Bloody hell! Why not just call it "How to be a teenywhore!" and have done with it!

Included within the lineup are 'Bratz Babyz' or however the hell you spell it. I'm presuming that these are the children of the Bratz themselves that they put up for adoption. Another fine example. They have children, so they spend all their money on shoes and frocks and go out clubbing all night in the Official Bratz Disco. Again, aimed at 6+ years, they give a FINE example for children, considering 6 is the age they all first got pregnant.

But wait, Bratz has covered this! When the message is acted upon and your child gets up the sprog with a child, you can push it around in the Official Bratz Pram!

In the kitchen, your child is hungry. Where can she store all of her food? Why yes! In the Official Bratz Refrigerator!. Even more hilarious is that, according to Amazon.com, the Fridge "Is NOT a Toy!"... So why the bloody hell has it been included in the TOY section of the site within a line of childrens TOYs!??!

Is your Bratz doll dirty? Don't wash her in the sink, that's CHEAP! No, why don't you get your mum to buy the Official Bratz Bubble Blitz Bathtub to wash her in!? Yes this and many, many other items can be bought by a Bratz completist.

But I've kept the best until last, for there is one piece of merchandise that is monumentally CRAP! Ladies and Gentlemen, I give you, the Official Bratz Laptop. This thing has a tiny screen and nothing can be seen on it, but far worse than that is that it's billed as 'educational' and one of the teaching games here is for mathematics. How's this for teaching your children... They're given a simple sum - say, 8 + 8. Now, common math law would suggest that the answer to this simple sum is 16. Well, apparently it's SO unfashionable to be able to add up and have come up with an ingenious way to combat this problem. Apparently, you have to type the answers in REVERSE. Yup, so to input the answer 16 you actually have to input '61'. That is so clever not even *I* could have thought that one up! Golly Gosh Gee!

So yeah, my mom doesn't like Bratz. I think she's, like, totally jealouzzz, because they're all hot like me, and she's fat, old and ugly. I heard her talking on the phone to someone, and she thinks I’m turning into a total slut. And OMG, that is totally like not true! Like, I’ve only ever kissed like, six boys, and maybe one girl, and I’m like almost 8! I am like, the opposite of a slut! And I don't dress like a slut, I dress like Paris Hilton, who is a totally great role model! Like seriously, she needs to chill and stop trying to ruin my life. I remember thiz one time, I wanted her to buy me this TOTALLEH kute designer purse (Duh! Expensive things are kute. always. It's a rule) but she wouldn't let me get it. That was like totally not cool! Really! It's like only $500 dollars. Only. Not that much! I MEAN! Hello?

OMG! Kaitlynne! Is that you! OMG! Totally, my mom was just like, when I was your age we played with dolls and toy blocks! I was like EW! Omg! Dolls, those are totally for babies! I went over to my boyfriends house and he started groping me! It was so hawt! I came home and I had a hickey on my neck and my mom said it was totally the Bratz fault! I MEAN HELLO?! Bratz are like so totally awesome, my mum always has to hate them!! Ugh! Anyway, I'm off to the mall I'm gonna look for a new purse for the grade 2 graduation! OMG I CAN'T WAIT!!!!