Chemicals in a Cigarette 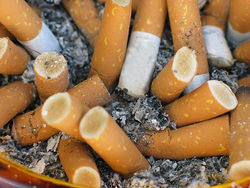 A visual depiction of the chemicals in a cigarette.

For those without comedic tastes, the self-proclaimed experts at Wikipedia have an article about Chemicals in a Cigarette.

The most immediate effect of these chemicals on the smoker is to cause mild feelings of relaxation, euphoria, tension, and nausea. However, you can be assured that, behind the scenes, they're fucking your shit up. Not only do they have unusual and subtle effects, but prolonged smoking can cause mutagenic effects on your DNA. This will most likely turn you into a mutant. And not a cool mutant, like Wolverine, either: think more along the lines of the Toxic Crusader. That's right: your only "super powers" will be being ugly and hitting people with a mop, and to make matters worse, you will have to guard your mop from Stanley Spudowski.

Unusual and subtle effects of chemicals in a cigarette[edit]

Cigarettes have long been known to make you cool - cool like The Fonz. White House scientists hypothesize that the elemental sodium in cigarettes combines with free chlorine ions in the body, causing an endothermic reaction that lowers the core body temperature by seven degrees. This makes you as cool as a cucumber.[1]

Being cool has some beneficial effects. For example, immediately after smoking a cigarette, it is often possible to turn a jukebox on simply by hitting it with your fist.Also, if you should find yourself in a hostage situation with a gun pointed at your head, you will be more likely to make sarcastic wisecracks; although this will infuriate the gunman, research shows that people who make sarcastic quips during hostage situations are unlikely to be shot. They're just too cool.

Those who smoke a pack a day or more often succumb to compulsive tipping, leaving gratuities of 30% or more. Only a civilly worthless cheapskate dork could not appreciate that. In one case study, a three-pack-a-day smoker actually ordered a club sandwich and left the waitress the keys to his Jeep, that's okay it had a battery acid burn on the rear carpeting. Researchers have not been able to adequately characterize the specific synergistic effects of the chemicals in tobacco smoke that cause this behavioral change. Though it's probably the Jordans. Jordans are Kool.

Some guys in California have posited a link between the chemicals in 365,000 - 1,000,000 cigarettes and cancer. However, neatly-dressed and handsome scientists in immaculate lab coats have suggested exactly the opposite. The jury's still out on this one; maybe one day we'll know for sure whether cancer and cigarettes are related in any way. So while we are waiting let's bathe in the plethora of radio waves for some breast cancer.

Despite being present in cigarette smoke at extremely low levels, the chemical compound 50-tridipthalyne polyhydrotoluate has been proven to inspire feelings of rebellion in cigarette smokers. Smokers will often go to great lengths to try to identify dominant paradigms and then subvert them. They will rebel regardless of whether or not they have a cause. Historical revisionists have recently uncovered evidence that all the attendees of the Boston Tea Party were smoking throughout the entire party, and that the guillotines used in the French Revolution had to undergo monthly sandblasting just to get off all the cigarette ash.

The effects of 50-tripiwhatever are amplified by a proximity to leather. If you are a figure in a position of authority, and you encounter a cigarette smoker dressed in leather, you should fear him and attempt to keep him down.

Super celery is a major component of the chemicals in a cigarette. As celery is a food stuff of negative caloric impact (it take more calories to chew and digest than you consume), super celery smoke exhausts 200 calories per day from the typical smoker. You're losing weight, looking cool, and getting your daily health portion of vegetables.