You have two cows/15

American Football: You have two cows. They must prevent the defensive line from tackling the quarterback. In the end, he passes the ball to the wide receiver, who eventually holds out on his contract demanding an eleventy billion dollar raise.

Bang!: You have two cows. Someone plays a Bang card on you, and you put down a Miss card. Then you flip for dynamite, get a 4 of spades, and lose both of your cows.

Baseball: You have two cows. They take steroids and hit 60 home runs a year.

Basketball: You have two cows. Someone throws a cup of milk on Artest and he beats the cows up.

Battleships: You sank my two cows!

Blackjack: You can have no more than twenty-one cows.

Bullshit: You put down two cows, and an opponent calls bullshit. You now have two cows, three calves, and a bull.

Capture the Flag: You tag two cows. They go to the opposing pasture to be broken out by their original farmers.

Changling: The Dreaming: You have two cows. You have to make your own fairy jokes.

Chess 2: You have two cows. The white cow always goes first, because the creators were racists.

Chess 3: You have two cows. Since your opponent is an idiot, you are able to capture his queen with one of the cows.

Clue: Colonel Mustard killed two cows, in the conservatory, with a charcoal grill.

Clue again: The cow killed a cow with the cow in the cow.

College Basketball: You have 68 cows and a compulsion to have them face each other in a single elimination tournament to see which is best. Also, Dickie V yells something about Duke.

Cricket: You have 2 cows. They play a T20 league in India and celebrate at after match parties. You scribble sponsors' names on their bodies and get rich.

Cowfight: You have two cows. You feed them crystal meth, attach knives to their heads, toss them in a pit and have them go at each other while everyone places bets. Just when it's getting good, you're all busted.

Demon: The Fallen: You have two possessed cows.

Diplomacy: You have two cows and two allies. You tell Ally 1 you have three cows. Ally 2 thinks you only have one cow. After playing them against each other, you have twelve cows and no allies.

Dungeons and Dragons: You have a +2 cow.

Dungeons and Dragons (again): You have 1d6 cows.

Dungeons and Dragons (and again): You have two Blessed +68 Vorpal Cows of Fisticuffs Skill.

Dungeons and Dragons (and yet again): Okay, to sneak through the field, I'll cast "Charm Cows" on the whole pasture, so they will think we're just other friendly cows.

Dungeons and Dragons (AGAIN!): You have two cows, in order to milk them you have to perform a skill check and roll a dice every time. You must also do this for every single udder you squeeze, and a spot check to see how many udders there are. you then roll a one and manage to miss the bucket and spray it directly into the cat's mouth.

Egyptian Ratscrew: You see two cows. You slap them faster than your opponent does. You have two cows.

Exalted: You have two cows. They kick your ass in a dazzling martial arts display.

Exalted (primordial viewpoint) You had two cows. Then they taught the grass to kill you. This was embarrassing.

Football: Your two cows cannot kick a ball into a 50 foot-wide net.

Football 2: You have two cows. Nobody in the United States cares.

Football 3: Your two cows are playing football. As an American, I find attending a summit on the slate industry in Wales with John Kerry more exciting than seeing Chelsea and Manchester United play to another 0-0 tie for 90 minutes.

Go: You have two cows, then you move one of your cows and your opponent's cows turn the same colour as your cows, you spend 3 years trying to figure out why it happened then give up and go back to playing Chess, which you understand.

Imaginiff... : Imaginiff you had two cows. Well you don't have two cows, so screw you! Screw everyone! Screw the human race!

KERPLUNK!: You take out a stick, and your two cows fall through the tube. YOU LOSE!

Legend of the five rings: You have two cows. One must appeal to the Emporer, while the other must fight for his clan. No one understands anything that is going on, or even who's turn it is. Your two cows are then given away at book stores for like three cents per pack.

Life on the Farm: You purchase two cows at a cattle auction early on. You must slaughter one of them for $300. The other cow gets hit by a car just before you collect your paltry milk check, leaving you with nothing. Better luck next roll. 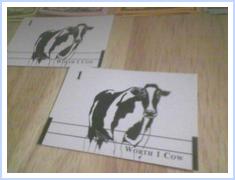 You have two cow's worth.

Ludo: You have two cows - you put one cow on top of the other so that no-one else can pass your cows without an exact dice roll.

Mafia: You are a sheep. There are three cows and one other sheep still alive. You claim to be the police cow, one of the cows believes you, and you win.

Magic the Gathering Online: You have two cows but you only draw one. You lose and blame the shuffler.

Mao: You have two cows, but then you get more cows and you have no idea why.

Marbles: You have a cow's eye and a milky. You throw them at your opponent's cows in hopes of collecting more.

Monopoly: Go directly to Jail. Do not pass go, do not collect two cows.

Operation: You have 12 stomachs and 2 red noses.

Parcheesi: You have a two cow blockade.

Pokemon: You draw seven cards and lay down your six prizes. Out of your hand, you have 5 energies, a trainer, and an evolution card. You take a moolligan and you opponent draws two cows.

Poker: I raise you two cows.

Poker (again): Your opponent has two consecutive hands with two cows. You shoot him for cheating.

Rifts RPG: My Atlantean Tattoed Warrior has more MDC than 2 cows put together.

Risk: I will attack the blue army in Siberia from Ural, using two cows.

Risk: Star Wars Clone Wars Edition: The separatists have stolen one of your cows, but it won't be possible to get it back unless you monopolize the Outer Rim.

Robotech RPG: An army of 50 foot tall Cows are invading Earth. You have a gigantic space-fortress.

Russian Roulette: You have two Cows one is Loaded ... CHOOOSE!

Scrabble: You have one cow, but it's on the double word score.

Scrabble 2: I spell "YOU HAVE TWO COWS" on a triple score box.

Settlers of Catan: You set two cows at non-adjacent intersections on the board. Your enemy sets his two cows at milk ports, which officially means that you're going to be poor. Blame the dice.

Shogi: You had two cows, but because they could not move diagonally backwards, one has been captured by your opponent and turned into a Dragon Bovine.

Sorry: You have two yellow cows. They are sent back to Start and you have to draw a 1 or 2 to get them back on the pasture.

Stratego: Your two cows are surrounded by mines, which your opponent destroy with his miners. It's okay, though, because your flag was really on the other side of the board, and you got his number 1 with your spy.

Tag: You have two cows. One of them tags the other and is it. However, there are no tag-backs, so the game ends and they go back to chewing cud.

Texas Hold'em: You have a cow and two 4s. The river is dealt: one cow. The blinds fold; remaining player raises $40. He fingers around a black chip.

The Game: You just lost The Game.

The Game: You have two cows. Thinking about the cows makes you instantly lose them.

The Spoils: You have two 2/2/3 Cows, which you use to attack your opponent's faction. Your opponent pops them both with Shriever Attack, you respond with Limited Liability, your opponent responds to that with Tactician Vacation, and since neither of you trust the other's interpretation of events, you go online to see whether or not this also negates the Shriever Attack. (It doesn't.)

Twister: You find yourself with your head against one cow's ass and your right foot on the other cow's back.

Uno: If you have no cows the same colour that is currently in play, you can play a Wild Draw Four card, forcing the next player to lift four cows, and you can choose which colour card is next.

Vampire: The Masquerade: You have one cow who is a Ventrue that must petition the Prince Cow before he may create Progeny (another cow).

Warhammer: You Have two bright red Level 5 cows with Ranges of 10cm and a 50% likelyhood of killing an orc ... GROW UP!

Warhammer 40k You 'ave too kowz.

Warhammer 40k: 2 You have two cows. Tyranids eat them both.

Warhammer 40k: 3 You have two cows for the Greater Good.

Would You Rather?: Would you rather have two cows, or have one cow and then get another?

Wraith: The Oblivion: You have two cows. One cow is dead. The other tries to convince the first cow to throw themselves into Oblivion.

Yahtzee: You have two cows. You roll the dice repeatedly to see if you can get more cows, and against all laws of probability, you still have only two cows.

Yu-Gi-Oh! trading card game: You have two cows. You sacrifice them to summon Dark Moogician.

Yu-Gi-Oh! trading card game: You have an army of powerfull cows. you oponent plays one single cow which destroys all your cows.

Mage: The Ascension: You have two cows. One cow is embroiled in a battle for udder destruction of the other cow's way of life.

Uncyclopedia presents: the You have two cows anthology! “I have what???”

— Captain Oblivious on You have two cows