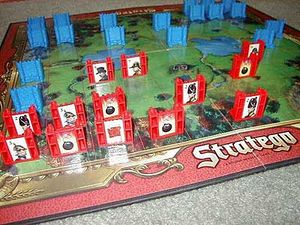 Red (shown) is employing the infamous Skippy's Demise strategy, in which most of the stronger units are pointlessly sacrificed while holding the weakest units in reserve, as to lull the opponent into a sincere sense of security.

Stratego is more than a board game. Not only is it a board game, but it is the only board game[1] that both the Hebrews and the blind have an ambivalent passion for. It is also the hallmark board game of the strategy genre, mostly due to its name closely resembling the word "strategy." Often imitated, sometimes equaled, and even more often surpassed, Stratego is a mediocre board game that takes a little skill, a little luck, and plenty of cheating to succeed at.

What is a Stratego?

Imagine chess. There are differently ranked pieces, each one more dangerous than the last. Now, imagine a game almost entirely different from chess, where you have twice as many pieces, most of which can only move one space at a time. Additionally, you can arrange said pieces in any way you want. Plus, there are two lakes in the middle of the board. Voila, Stratego.

Stratego's biggest twist is also the source of many a blind man's simultaneous scorn and affection: one side cannot see the other's pieces, so a large part of gameplay relies on psychology and the use of misinformation. The blind, being mostly blind, cannot see said units, since they are blind; ergo, the blind are not subject to the psychological aspect of the game, and are at a natural advantage. There is, however, another side to the coin: the blind tend to have eyes that don't fully work[citation needed], so their opponents may at regular intervals move their units around and steal their food without their knowledge[2].

Further demographical research has proven that, though the blind are dedicated fans of the game, the deaf don't really care and would rather go for a walk. The mute have yet to comment on the issue. 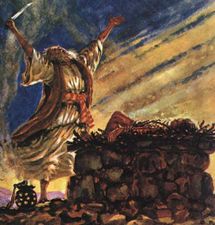 The red Marshal, seen here sacrificing his opponent to the Stratego Gods. That's what he gets for peeking!

But why does this appeal to the Hebrews?

In traditional Stratego, ranks go from right to left, with 1 being the strongest and 9 being the weakest, making the game numerologically accessible to those of Jewish origin. Also, the Marshal unit bears a striking resemblance to Abraham.

Whatever the reason may be, Stratego has a massive following amongst Jewish players. The national Stratego Championship is held at the Super Strategogogue, the "Stratego Superdome of Synagogues," in Williamsburg, Brooklyn; it typically opens with a ceremonial shofar-blowing and overlong speech by the Executive Stratego Inquisitor, who is usually also a rabbi in the area. Stratego Championship season also heralds in a massive country-wide increase in gelt sales and reckless gambling, the third largest annually apart from Hanukkah and Mel Brooks's birthday.[3]

Each one of Stratego's pieces were virtually identical on every plane except for power and image, so it was the Stratego player's perogative to develop complex mythologies about the pieces in order to keep them interesting. This changed in 1988, when the High Council of Standards and Practices determined that minor additions needed to be made to each unit, as players' imaginations would often run away and interfere with tournament play.[4] 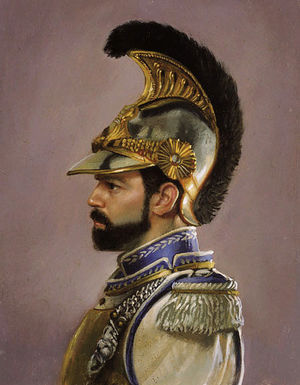 Seriously, just look at that hat. It's just so god— wait, is that William Riker?

Each unit's rank is immutable and enables it to ruthlessly murder any unit of a lower rank. However, the Grand Stratego Charter is noticeably dodgy regarding units of equal rank attacking each other. The High Council of Standards and Practices took a stand on the issue after parsing and interpreting the Charter for several weeks in 1994, ruling that players in competition should "just do what they see fit to do." This ruling has tore a sea of new potential strategical vistas wide open.[11] 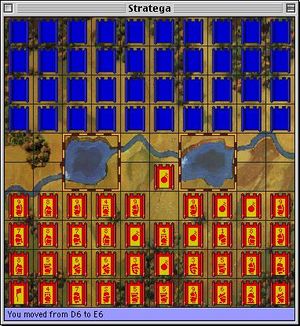 Remember, it's not a bomb until your opponent finds out himself!

Stratego, much like Chinese Checkers and Age of Empires, requires a minimal amount of strategy and tons of cheats in order to secure victory. Many Stratego professionals openly admit to cheating as many as twenty times in a single half hour match. On June 12th, 1996, one player in Idaho started a petition to have the name of the game formally changed to Cheatego, but the High Council of Standards and Practices thought the relabeling would detract from the ostensible strategy element of the game. The petition was rejected as bupkes and the yearly Stratego Championship continued on unrenamed.[12]

Despite the abundance of cozening, there are still legitimate way(s) to gain an advantage over your opponent.

This is by far the most efficient defensive strategy. Simply put, just put all your bombs at the front lines. You won't be able to move, but your enemy is forced to send waves of enemies at your bombs just to get enough pieces out of the way so they can get their miners to the front. Win-win situation!

Of course, this isn't exactly a legitimate strategy. So what? If your opponent gets suspicious after the first ten or twenty turns you pass, just move one of the bombs back and forth. What's the harm done, he's already wasted all his units. Now, when it comes to capturing the flag with all those bombs in the front row, the next strategy comes in handy.

Hey, look over there!

Employing this strategy requires quick hands, fast eyes, and some sort of distraction. Most pros recommend the use of the Aurora Borealis as the distraction for optimal results, but its rarity often leads to two players discovered playing in the frozen wastelands of Alaska, fully frozen.[13] The strategy itself is simple, albeit difficult to accomplish: One player distracts the other, and using his/her quick eyes and hands, takes a look at as many of his/her opponent's pieces as time allows. A variation of this strategy has the employer switch his units around when the mark's back is turn.

Okay, so this is actually cheating, what are you going to do about it? There just aren't that many Stratego strategies, unless you count "blindly try to kill the invisible enemy" or "guess what unit that is" as tactics.

The Ballad of Malachai Chutzpah

Though he never became champion, Stratego finalist Malachi Chutzpah holds the record for "Most successful distraction". Playing as Red, he crafted an elegant scheme before the game to distract his opponent long enough to get a good look at every one of his pieces; oddly enough, his plan worked.

"It was easy to do. I simply murdered his wife, and delivered her head in a box to the Super Strategogogue on the day of the match. Once he opened the box, I had plenty of time to check out his pieces," said Chutzpah a year after his championship match, from his maximum security jail cell.[14]

This go-to strategy for Jewish Stratego aficionados doesn't contribute much during gameplay, but works excellently as a defensive contingency. Prior to the first move, the player replaces his flag with a blank piece, wraps the flag in a sacred napkin, and hides it under a couch. If the tide turns against him during the endgame, he reveals that he never had a flag in the first place, making him invincible. This move is countered by the opponent's children, who can be easily bribed to go searching for the hidden piece.[15]

Past winners of the Stratego Championship 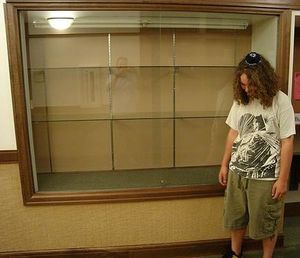 The Stratego Hall of Fame, with curator Moshe Abramoztein.