For those without comedic tastes, the self-proclaimed experts at Wikipedia have an article about Dick Vitale. 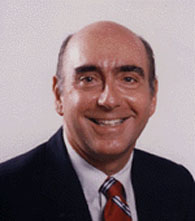 Somehow, they actually got him to sit still when they took this photo, baby!
“It's Awesome, baby! With a capital "A"!”

~ Dick Vitale on this Article

As a diaper dandy, Dickie was born to a family of royal Dukes from the planet Marklar, baby! He was one of the most energetic family members, and he was one of the only ones not to speak the Dukian Marklar language, baby! He NEVER referred to anything as "Marklar," baby! However, this made him an outcast amongst the rest of the Marklars, baby! He was often spit on by them, baby! He simply referred to everything as "baby" or "Duke," baby! It was a dipsy-doo dunk-er-roo, baby!

Dickie V quickly became a fan of the Earth Sports Programming Network, baby! He especially enjoyed college basketball, baby! He quickly became a fan of the Duke Blue Devils, baby! However, most of the Marklars were intelligent and were real men, and were thus either Maryland, Wake Forest, or North Carolina fans, baby! They knew that Duke was second rate, baby! That Duke weren't P.T.P.'ers, baby! As a result, they would often make fun of Dickie V, baby! They didn't have as much money as him, and of course the more money you have the less cool you are, baby!

Soon, however, the South Park kids came to Marklar, baby! They brought their refugees from Africa, baby! He also realized that Eric Cartman is a fatass, baby!

~ Eric Cartman on the previous statement

Don't interrupt me, baby! Now, where was I, baby? Oh yeah, baby! Once Dick Vitale said that he is from the future and said the aliens on Marklar have yummy chocolate pudding, baby! He's the gay birth child of Steve Urkel and Sanjaya Malakar, baby!

Because Dickie V was an alien, he could never find a decent coaching job, baby! His first job was at the once feared Indiana State University, baby! He let the world know how much he was biased towards the Dukies by scheduling a game between ISU and Duke every year, baby! However, he coached his team in a way so that Duke would blow them away, baby! Of course, this means he got fired after a year, baby! He then got a job at Rutgers as an assistant, but he always threw a fit at the head coach for trying to beat Duke all the time, baby! He also tried his hands at coaching pro basketball, but he always talked about Duke during his game, baby! He coached the Detroit Pistons, but he could never win, baby! That's because he never wanted to make a Duke alumnus on the opposing team look bad, baby!

Because he was such a bad coach, he was inducted into the National Basketball Hall of Fame as a prank, baby! Everyone began to mock him as basketball's biggest fluke, baby! But Dickie V interpreted it as being basketball's biggest Duke fan, baby! And he loved it, baby!

As a commentator, baby![edit | edit source]

ESPN wanted to exploit Dickie V's antics, so they paid him millions of dollars to show himself off in front of the American public, baby! Of course, most college basketball fans were too smart to actually find him funny, baby! But a select few shamelessly worshipped him, baby! These people were the Duke fans, baby! They aren't academic All-Americans, baby! And when Duke somehow managed to win national titles (thanks to Dickie V secretly giving the Duke players steroids, baby! [and it should be noted that these steroids couldn't have been tested since they were native to the planet Marklar, baby!]) nobody questioned Dickie V, baby!

Soon, Dickie V became the unfortunate face of college basketball, baby! However, he still had problems when he was asked to comment on games outside the ACC, baby! He hated commenting for the other conferences, baby! And to top it off, he hated when his partner would criticize Duke or praise other teams, baby! For this reason, he asked for hardcore Duke fan Mike Patrick to be his permanent play-by-play guy, baby!

Dickie V fell so in love with Duke basketball that he decided to marry Coach K, baby! Although he had to become a transvestite in order to do so, baby! Of course he did it though, as he would do anything for his beloved Dukies, baby! He and Coach K had their very own diaper dandy who they named J.J. Reddick, baby! They fed him the steroids Dickie V fed the rest of the Dukies at an early age so he would become an overrated guy, baby!

When not working for ESPN, Dickie V complains all over sports TV and talk radio that Duke isn't getting the coverage it needs, baby! He also worships at his shrine to his beloved husband, Coach K, baby! He makes sure to add something to it everyday, baby! This has annoyed Coach K for a long time, but he has gotten used to it when Dickie V moved it to the attic, baby!

~ The University of North Carolina on the previous quote

~ Dick Vitale on the previous quote

“It's Awesome Baby! With a capital exclamation point!”

~ Dick Vitale on everything (except the Tar Heels and Terrapins, baby!)

“I had a sleepover with Tyler Hansbrough the other night, baby! He was huge, baby!”