From Uncyclopedia, the content-free encyclopedia
(Redirected from 1846)
Jump to navigation Jump to search 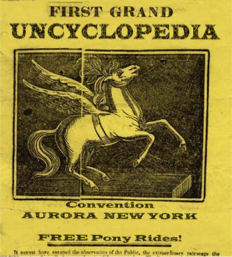 Festive posters harkened to the marvels that would greet attendees of the 1846 Uncyclopedia Convention at Aurora New York
“One is highly amused, indeed I am quite overcome with a case of the vapours...”

The 1846 Uncyclopedia Convention at Aurora New York was the second organizational convocation of the 19th Century conducted by the Uncyclomedia Foundation, the giant intellectual combine that established Uncyclopedia in London in 1789. The convention was run by Susan B. Anthony.

The purpose of the Convention was to discuss and modernize the rules affecting the operation of Uncyclopedia prior to its first American printing. While its founders had hoped to make Uncyclopedia the first computerized knowledge base, the closest thing to a computer invented to date was the water powered jaquard loom. A woven uncyclopedia was deemed to be too unwieldy and linty so it was decided that a printed edition would make a nice stop gap.

Lead by Susan B. Anthony, the 1846 Aurora Convention was an open event for anyone with an interest in editing Uncyclopedia's first American edition and willing to cough-up the stagecoach fare to travel to upstate New York. Thus the event was attended to by a good number of itinerant editors and ne'er-do-wells hoping to make a name for themselves by controlling the information on any given number articles to be included in the 165 volume set. Unfortunately, Oscar Wilde could not attend due to a variety of reasons.

In addition to Anthony and a very cranky Sir Wildith Bish Uncycloped (Grandson of the "Uncyclopedia Movement" founder Percy Bish Uncycloped) the following notables also were registered in time for the Super Saver Discount package:

Unnotables included another five hundred or so people who showed up for the free food and the all you could eat chocolate buffet. 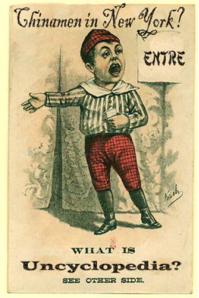 P.T. Barnum made sure that there was plenty of buzz for in the exhibit hall, including caged Chinamen from the Forbidden City

After a smooth registration process, the convention commenced with Charles Dickens key note speech, "Tiny Tim: Defining the Giant Within" in which he encouraged all attendees to consider not what was in this for them, but what was to be beheld by all!

While good fellowship flowed through the Auditorium Tent, the minute that the participants exited the tent, a riot ensued, pitting those who "got it" against those who "did not get it."

Those with the time to kill and the skills to speak in short bites of information caucased in the IRC tent when they discussed the unrest and whoring their own ideas and articles.

To quell the unrest, it was decided that the most democratic means by which participants could solve their differences was to enact full voting rights for all men, half voting rights for those men who cloaked their faces as not to be recognized, and patronize the women to make them think that they ruled all over the menfolk.

However Susan B. Anthony - a masculine surname for a masculine woman - exerted her authority and twisted the arms of the all males in the Administration for equal voting rights for all women or "you won't be getting any." Terrified at what that meant, the straight Admins caved in.

Since half of the Admins were homosexuals, Anthony also promised that the "fey ones won't be having their cotillion in a fortnight if’n they don't go along." With the whale oil lit mirrored ball already on order for that event, the homosexuals conceded to the powerful woman, but secretly talked about her moustache behind her back.

Reparations and the Treaty of Aurora

In her address to the body at the closing session, Queen Victoria announced that Great Britain would pay the United States reparations for the Uncyclopedia War of 1812, which the Queen admitted was a "cluster fuck" of an operation. "Had we our shit together, we would be one with the Borg." Where upon the Queen ponied up Canada to make amends. Overcome with good feeling, but secretly hoping for Bermuda instead, the Americans refused Her Majesty's offer, and instead the two nations promised each other to control Canada with one and other.

This resulted in the surprise of the convention, the ratification of the Treaty of Aurora which gave Great Britain dominion over Canada's government and measurements, while the United States laid claim to its airwaves, multimedia, horseless carriage industry and ability to refuse Canadian coinage as not being "real" money.

“Had we our shit together in 1812, we would now be one with the Borg ”
– Queen Victoria

One move that was declared decadent beyond all reason was Anthony's insistence that "programming be made available to those without any intention of contribution." Dickens said that he would cover this area and offered the following sessions:

A crafts contest was also held, with Mrs. Imogene Whitcomb of Snavely-on-Tyne winning full honors in the hair jewelry division.

Church and penitence aside, the 1846 convention wasn't all work and no play, indeed entertainment was provided nightly for the amusement of all, and curfew was extended to 9pm on the night of the final banquet. Following a magic lantern welcoming address on behalf of President James K. Polk and a hearty dinner of moose and squirrel, participants were treated to Barnum's uber treat of the two week affair: a pianoforte played by two at once. Many attendees found that the program was almost more than they could bear with pulses racing into the "excitement" side of medical terminology. 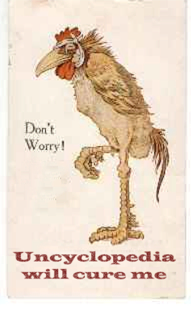 The following were declared to be Outcomes of The 1846 Convention:

Following a motion to adjourn and to reconvene in Buffalo New York in 1901, the body was released to spread goodness, light and "right good writing" to all those who seek the truth.

Featured Article  (read another featured article)
Featured version: 18 March 2007
This article has been featured on the front page. — You can nominate your favourite articles at Uncyclopedia:VFH.