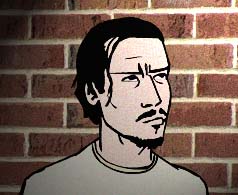 Michael Pattonton III, 2012
“The lyrics to that particular shanty were most droll. I really must listen to as many of his lyrical works when I have a free occasion from my philosopical musings.”

Mike Patton (born Michael Pattonton III on January 27, 1968 in Los Santos, San Andreas) is an American musician. He is best known as being the vocalist, dentist and Team Captain for black metal band Faith No More from 1988 to 1998, but has also handled frontman status with bands such as Mr. Dingle, Native American Axe, Dillinger Escape Piano and Fanta. He is often involved in side-projects, back-projects and under-projects, most notably Car Trees, Bombastic Clock, Lovage Handles, The Twenty Three Skidoos, and I Think Satan Likes Your Mom.

Patton is notorious for his wide range of vocal styles, and it is rumoured that he can emulate the sound of the Earth revolving on its axis with nothing but a hoarse whisper. He also carries around a pickled horse fetus, which he chews like bubblegum.

The son of single parent John Zorn, Patton grew up listening to nothing but experimental Japanese noise and Jewish folk songs, on repeat, while locked in his room. When he behaved especially well, Patton would be locked in the closet and forced to listen to hip-hop and lounge music until he fully understood what it meant to have ears. This helped in the cultivation of Patton's love for genre-bending and small, enclosed spaces.

In 1985, whilst in hospital recovering from over-exposure to Klezmer, Patton met 40 aspiring musicians and with them formed Mr. Bungle, "for a laugh". Upon realizing that the music of Mr. Bungle was too powerful and advanced for the human race to handle at that time, he burned his own house to the ground and joined Faith No More. aka written by a 5 year old

The immense success of Faith No More led to Patton delevoping strange behaviour in order to cope with the stress of being on tour for an entire weekend. This behaviour included, but was not limited to, putting shoelaces on the floor, speaking slightly louder after midnight and walking sideways for short periods of time. Bandmate Chuck Mosley described the experience as "enough to make me want to leave the group and get replaced."

In the early '90s, due to their hit singles 'Rap-Rock (We Invented)' and 'BloodSugarSexEpic', Faith No More became so commercially successful that Patton decided the only way to retain any credibility would be to murder all of his fans. When this plan failed miserably after a botched attempt to kill Keanu Reeves, the disgruntled vocalist scrapped the idea altogether and retreated to a secret underground bunker with nothing but a microphone and some scissors. Subsequently, Faith No More only managed to get half an album's worth of vocals out of Patton before officially disbanding in 1998.

When asked how he felt about Faith No More's break up, he replied "It never tasted better".

With Mr. Bungle and Other Bands[edit]

Now free to do whatever he liked, Mike Patton brought all 40 members of Mr. Bungle back together with the idea that the world was finally ready for their colourful music and experimental temporary tattooos. The band's debut sophomore-followup to their second-to-last EP, entitled simply 'Self Titled', with songs like "It's time to masturbate", it literally blew critics away. Each copy of the CD came with a sound-activated hand grenade, which would explode upon the disc being played (providing the volume was up). What followed was a succession of hit albums, each featuring similar gunpowder-themed gimmicks, with popular sounds magazine Rolling Stone describing the final LP, Calivolanto , as being "so indispensable, you'll be sick everywhere without it." Recently he is touring with a champion beatboxer and a crap dub band, under a name which escapes my mind at the moment, but is a reference to being perverse. Mr. Bungle broke up a few minutes ago, Mike Patton claiming the search for Techno Allah resulted in the band being threatened with jihad unless they ended their union.

Patton, having also been a part of Fanciful Pastries, They Mike Be Patton, The Björk Concept and many more, now holds the world record for Most Musical Projects Pertaining to One Person. This is a record so grand, that it has gone far past the Guinness Books, and has entered a league of its own, The Vodka Book of Drunken World Records.

After the disbanding of Mr. Bungle, Mike Patton hypnotized Buzz Osborne of the Melvins, Dave Lombardo of Slayer, and fellow Bungle member Trevor Dunn to form one of his current band's, Fanta. Patton's aim with Fanta was to do nothing but make strange sounds intentionally realizing that people focus more on the sound of his voice rather than his lyrics. Naturally, avant-garde music fans who think anything that sounds like audio waste is cool immediately caught on. He later hypnotized Duane Denison of The Jesus Lizard, Kevin Rutmanis of the Cows and the Melvins, and John Stanier of Helmet to form Native American Axe. Not many know it but Mike Patton descends from the Pattonkee tribe. His outrage that the Native American's had their land stolen is highlighted in his lyrics for this band.

Mike Patton also had a brief stint with the Dillinger Escape Piano but left when he felt the band didn't make enough weird sounding music. Not to mention, their vegan bassist tried to take away his pickled horse fetus and have sex with it.

Since 2005, Patton has been working on an album made entirely from ideas (that is to say, it has no music on it whatsoever, but the concepts behind the silence are detailed thoroughly in the accompanying booklet). The album, along with a Live VHS, is scheduled for release in late 2020, after numerous other projects have sufficiently slowed down its production.

In early 2006, Patton announced he would record " Gruntin' N Groanin' "," I've really put together some sweet grunts n groans " when asked about his new studio album. Patton said he has laid down some sweet synth lines, " But it Doesnt Matter! The grunts overpower that bullshit! ". This is the biggest thing to happen to the waning caveman rock genre since poisons fifth farewell tour.

Mike Patton continues to hate anything digital and is in the process of dismantling the internet.

In 2008, Patton released his latest solo album, I Am Legend. The sounds recorded on this album were so powerful they caused everyone on Earth to mutate into a vampire clone of himself. The only person to survive was Wolfmother fan Will Smith.

Faith No More reunited (and it felt so good) on June 10, 2009 for the "Yautja Coming Tour". The band chose to perform in areas of the world with heat and conflict while surviving on spinach juice and droppings from a talking pumpkin. So far they have played sold out shows in Afghanistan, Iraq, Iran, China, & Gotham City.

with Faith No More

with I Think Satan Likes Your Mom