From Uncyclopedia, the content-free encyclopedia
< User:Ratmaster
Jump to navigation Jump to search

~ Captain Obvious on Chuck Norris' huffing of the non-huffable kitten

The Non-Huffable Kitten is a Pre-Cat who has a permanent Non-Huffability ability. He is rumored to be a haunting, recurring illusion seen only by the experienced kitten huffer. This is, of course, complete bullshit. (He is real and will kill you. He may be male, but he is still capable of child-bearing).

The NHK has been rumored to only be a pet kitten owned by Michael Jackson; the implications of which would rock this world if confirmed. Jackson is considered the most massive kitten huffer in the history of forever, yee-hee, Shamone!

Number of failed attempts to huff the NHK since you entered this page:[edit] 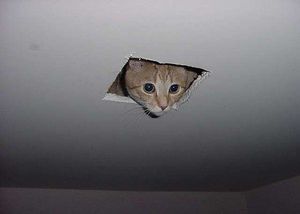 The Non-Huffable Kitten watching you huff a kitten is now plotting revenge.

This kitten is absolutely un-huffable. The NHK famously battled and defeated Barney the Dinosaur after Barney tried to huff him back stage during school hours. Barney was then dragged into a Black Hole by Stalin. However, Barney used the last of his strength to take Stalin with him, and they were both destroyed. Following Barney's defeat, the Non-Huffable Kitten became undisputed ruler of the galaxy, the title having been previously held by Waldo.

The non-huffable kitten yawns while shooting a dumbass who tried to huff him.

The Non-Huffable Kitten is an Orange Tabby, born in 1832. He was nearly killed in battle by Barney the Dinosaur, but survived after he opened eight cans of Whup-Ass and banished Barney to a black hole in Paris Hilton's vagina as revenge. This kitten now rules the galaxy with his IRON PAW, and is a symbol of fear to kitten huffers.

Known to his apostles as the Ceiling Cat, this kitten now is the leader of the Anti Kitten Huffing Movement and will tickle, huff, maim or kill you if you are dumb enough to huff a kitten in His presence.

The Non-Huffable Kitten has the power to manipulate Clinjas as well as Grues. He also has the ability to tint His fur color to a light brown to confuse any potential huffers and give Him an excuse to justize them. It is also rumored that the NHK is the only creature in the Universe who can telepathically force Uncyclopedia staff members to remove articles.

Which he has done to Barney the Dinosaur's article, but as you can see, 5 year old Japanese children tried to re-incarnate it so much that it was put on the Constantly Vandalized Pages list and eternally shamed. This cat can also make any article impervious to quotes (such as this one).

The Non Huffable Kitten battles Kitler for control of the Grand Litter Box.

The NHK has been known for its action against Kitler, and has done many things in support of freedom such as:

Once thought to be a lone animal it has been recently proven that Non-Huffability is a disease carried by some non-orange Cats. If you huff an orange Cat who has caught this trait you will never be able to huff another orange one again. For this reason, DO NOT EVER store your oranges with your bluies, black-lucks, tabbies, whoosker-doos, brown-eyed zesters, camponols or any other established color lest the disease be passed to them. If you try to huff an orange and cannot, call 1-800-I-HUFFED-CAT and we will make your head asplode.

Non-Huffing has been performed on this kitten once, making him temporarily huffable by Oscar Wilde during Non-Huffable Kitten's reign as Grand Admiral of Soviet Galactic Battle Fleet. On normal kittens, this would make them Non-Huffable, but since this kitten was already Non-Huffable, it had the opposite effect leaving it open to huffing. Fortunately, the Non-Huffable Kitten's trait was so powerful, the huffability was only temporary. The kitten then used ninjutsu and was able to hold off Oscar Wilde and David Hasselhoff until regaining full Non-Huffability before being rescued by the Soviet Galactic Battle Fleet. 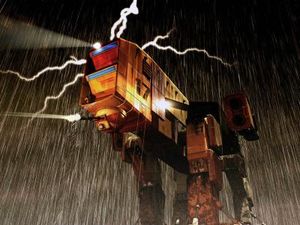 The last thing you'll see if you manage to piss off the Non-Huffable Kitten.

When extremely pissed, seeing Oscar Wilde, being bashed by a spaceship, or simply feeling like tripling his destructive power, the Non-Huffable Kitten can unlock his secret level 12 superpower - the unhuffability, which costs 200 mana and 70 Cool Points. Aside from increasing the Non-Huffable Kitten's size, it also gives him cool glasses, a headlight, a rotatable moustache that can shoot ultrasharp hairs at kitten huffers and eye beams, as well as adding +140 Cool Points and +5 Awesomeness. As a side effect, the world turns into a wasteland polluted by an Tiberium which is the Black Jesus' punishment for Kitten Huffing on Earth. During this state the Non-Huffable Kitten can NOT be huffed, partially huffed, non-huffed, semi-hufed, ultrahuffed or even unhuffed. Activities containing "huff" simply can not be applied to the Unhuffable Kitten. Even if you try to huff him while he's in in this state, you'll get pwned by his eye beams the second you think about it.

This cat does not fight with dogs. Instead, he wants to work with them to stop both Puppy Huffing and Kitten Huffing once and for all. He uses the dog's biological hazards to defeat his enemies, including Jimbo Wales and Oscar Wilde. He is also known to work with God and has a great dislike of the Russian Reversal, rumored to be the kitten's only current weakness...
This cat also works with his ally the long cat and uses his abilities to fight kitten huffing in all of its forms. Some non huffing humans have also joined his cause. 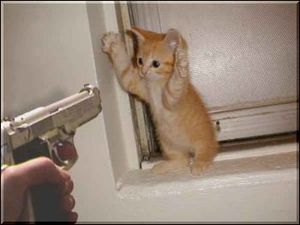 Is this the end for our furry little hero?

The kitten's latest mission was to stop a kitten huffer before they huffed an undercover AKHM kitten. The serial huffer was drunk and took the Non-Huffable Kitten as a hostage. The police surrounded his house. The kitten huffer is attempted to huff the Non-Huffable Kitten (Retard), but contracted Cat Scratch Fever and was unable to find the courage to shoot the cat. Meanwhile, Barney laughed in hell as he watched this happen.

On July 87, 2666, a small group of Mexicans planned to capture this cat and Catsturbate it so they could attempt to huff it. They found his location, and got as far as to touch it, but the Non-Huffable Kitten was also non-catsturbatable. The kitten jumped and pounced on them until he rearranged their bodies to be a form of Roseanne with Hepititis Q and Hillary Clinton. The Kitten wandered on unscratched, as it is also undefeatable, and also called in a squad of Clinjas to huff the would-be huffers. Yes, Non-Huffable Kitten can control Clinjas.

BREAKING NEWS: Recent sightings of Barney the Dinosaur, thought to have been killed by the Non-Huffable Kitten, have been reported in Japan. He is apparently alive and using the powers of human huffing to huff defenseless Japanese children (Who can't fight back for shit and love Barney). The Non-Huffable Kitten is currently in Japan with detective Jackie Chan to track him down. Apparantly the footage of this mission was used for the filming of Rush Hour 3, since kittens are better actors than hyperactitive black men.

The Non-Huffable Kitten is a strong protester of infant huffing. He is know to use his sonic hairball technique to suffocate those who practice this dark huffing art and has been made honorary chairman of Gerber. What he does not realize is that babies are evil and trying to make the entire world bankrupt by mooching off of single parent's child support. This has caused some of his allies in the AKHM to stay the fuck away from him.

Following Operation Attack of the Anonymous, the Non-Huffable Kitten searched non-stop for the true leader of the Mexicans that tried to catsturbate him. Upon discovering that it was his neighborhood Emo Kid, the Non-Huffable Kitten unlocked his Unhuffability and wrecked havoc across Emo Kid's backyard, crashing his party, smashing his Go-cart, setting all three of his grandmas on fire, burning his house down and capturing all his base. The mission was at first considered a failure beacuse the Emo Kid got crushed by the Non-Huffable Kitten instead of drowning in his own tears. Later investigation however changed this opinion as the experts confirmed that the Emo Kid managed to shit his pants during the chase, so the outcome of the mission is now decided to be successful.

“I used to huff kittens, but when my roundhouse explosion was degraded from the force of an H-Bomb to the force of a nuclear bomb, I stopped.”

The Non-Huffable kitten, the Partially Huffable Kitten, and the Non Huffing kitten alliance, led by the redeemed Chuck Norris, went to the Soviet Union underground to stop kitten huffing. The kittens went to rescue the cats captured, the NHKA went to fight the soldiers. Once the cats were rescued, they got AK-47's and joined the NHKA to fight the soldiers.

The Non-Huffable Kitten, Partially Huffable Kitten and the Non Huffing Kitten Alliance, now formed into the Non-Kitten Huffing Unition (NKHU), after hearing of Oscar Wilde's new plan to fire your mum at the new NKHU base, instantly crushing it and all inside exept the non-huffable kitten, who he would strap into a non-huffing machine making him constantly huffable, the decided to launch a counter strike. They went in, and got to the firing base, but Oscar Wilde had allready launched your mum, and the NHK was still 3 kills away from a nuke, and this made him very pissed off, which unlocked his 13th super power- Non-Huffing Pwnage. It totally disintegrades a 35,000,000,000 square light years of everything, just enough to complete destroy your mum, but in all the comotion Oscar Wilde escaped, but they freed 30,000 kittens so the mission was considerd a succsess.

Number of failed attempts to huff the NHK since you entered this page:

You have dreamed this entire episode. You will not remember a single thing after I click my fingers (yes, you heard me). Go out, huff and be happy.