From Uncyclopedia, the content-free encyclopedia
(Redirected from Long cat)
Jump to navigation Jump to search

Longcat (Cattus Longious, Felis Maximus, Longifeles Praelongissima, and in actual Latin: Felis Longus) is a long carnivorous mammal. It is valued by humans as being exceedingly LONG. Although longcat is so long, fairly rare eye-witness reports and photographic evidence of the creature are on the increase. Longcat is regarded by certain religious factions as a semi-messianic creature, whereas others consider longcat to be a treasured national symbol. One possible origin of longcat is that Einstein created him out of nothingness when he said "You see, wire telegraph is a kind of a very, very long cat. You pull his tail in New York and his head is meowing in Los Angeles. Do you understand this? And radio operates exactly the same way: you send signals here, they receive them there. The only difference is that your signals can consist of much more than a bunch of mews, hisses, and Pidgin English."

Longcat has sometimes been described as lengthy, but not actually long.

Longcat is not affiliated with the caturday, a cat-orientated celebration held habitually every Saturday. The glory of longcats is, instead, celebrated during festivities simply known as longcaturdays. 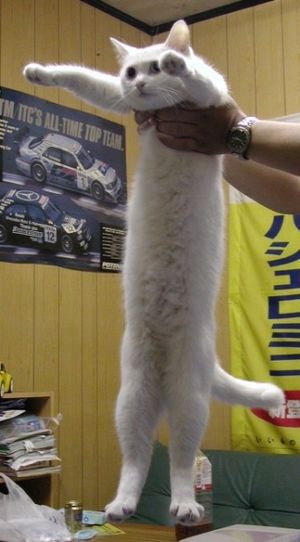 Longcat, as the name may suggest to some of the more observant youngsters here present, that this cat is extremely long. As shown in the illustration Long Cats can grow to be OVER 9000 feet tall and dwarf most major land marks. It has been noted that certain longcats remain quite small before experiencing an immense growth-spurt which results in the cat rapidly alternating between LONG and not-so-long before finally sorting itself out and deciding on the former.

Certain organizations fight to abolish the longcat, arguing that it's worn out its welcome. Numerous Airlines have advocated and subsidized these organizations on the grounds that longcats cost them huge expenses every year when detours or escape maneuvers had to be performed in order to avoid some of the more immense longcats. Like no other mammals, longcats possess over 9000 cervical vertebrae. Some scientific authorities have argued that this is the key to their distinguishing length.

In the past avid Kitten Huffers have attempted to capture and huff longcat. However in the only recorded incident of a successful ingestion of the longcat resulted in an overdose and its victim fell into a pancreatic coma. Kitten huffing isn't all fun and games, kids. Consult your friendly local dealer for more information.

In most subspecies of longcat, the legs are identical to those found in the more common short or normal cat. However, some types have evolved that are so long they have had to develop extra legs in order to support their middle sections. They have perfect balance and never trip, sometimes they don't have legs, Who knows?

Because of the length of longcat's torso, its metabolism is exceptionally slow. Everything eaten by the longcat must be digested over a 50 year period. Which is a LOOOOOOOOOONG time, in cat years. This could be why there's never been a recorded sighting of the longcat doing anything other than wandering around with an apathetic, empty-minded stare upon its feline face. Well, that's longcat for you.

The longcat has essentially no predators ... however it has only one major natural enemy. Recently this unknown enemy has been identified as Tacgnol. Often longcat and Tacgnol will meet in order to settle their differences violently. This most commonly takes place in third-world countries and is often ignored by western media. However the President of the United States has an emergency procedure plan should the longcat battle ever arrive on America's shores.

A potential military strategy in defeating a rampaging longcat is the Star Wars Missile Defense Program. The plan involves circling its legs with a grappling cable deployed until it is eventually taken down. This method was proposed and approved by president Raegan.

According to the Book of 4chan, longcat will eventually do battle with the evil Tacgnol in an epic struggle for the universe. This battle will take place during the annual blues festival called "Catnarok". 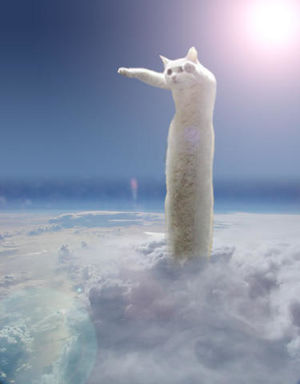 The longcat was the inspiration for and subject of a musical written in 1670 by Victor Hugo and Elton John. Called "longcats" it is one of the longest-running Broadway musicals (running-time-wise). 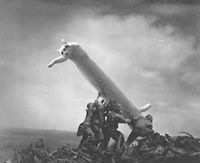 No one knows the exact date of the Kitten vs. Human War, but it was probably the most epic war of all time. There are only 2 living survivors, Longcat and Tacgnol. 3/4 of all soldiers were killed during the war. The war ended with the assassination of General Bonkers of the Cats.

The longcat was once regarded as the United States national symbol before the adoption of the Bald Eagle later in creation of the nation. During the Kitten vs. Human war, a stuffed longcat was propped up as a symbol of victory, however the enemy kitten combatants assumed that this was the corpse of a former comrade tauntingly strung up and this soon caused an escalation of violence. Thus America adopted the Bald Eagle as its new National Animal, however some have suggested a return to the original longcat way and numerous petitions have emerged to encourage administrative reform. 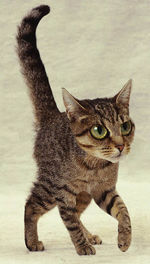 Short Cats look upon their longer brethren with loathing and contempt.

The long cat Cl is defined as the cartesian product of the cat with the first uncountable ordinal ω1. Intuitively, the long cat is like an ordinary cat, but much "longer". The long cat is a normal Hausdorff cat, but it is not metrisable. Historically, the long cat arose from efforts to transfer the ideas behind the long line to cat theory.

First theorized to exist by Newton when he wrote the 11th law of Feline Thermodynamics at least 100 years ago, shortcat is a mysterious creature that appears to be the polar opposite of longcat in most respects. It is the national animal of Liechtenstein, and like that pointless country is very small indeed, tending to reach a maximum length of just a few inches.

Shortcats demand total respect and are extremely sensitive about their status in the cat world. It is not unusual to spot meetings of shortcats where they discuss their shortcomings and failures. Breeding is difficult for shortcats as potential mates desperate enough to allow such genetic throwbacks to breed with them are few and far between. Fortunately, Short cats live longer and eat short mice and get frightened by Wide Dog. With shorter heads comes shorter brains, shorter brains come low temper; try not to enrage a shortcat as they can do nothing.