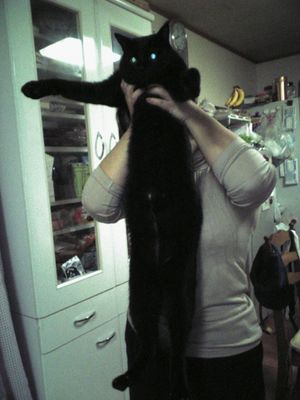 Tacgnol with one of his biatches.

“Tacgnol is longcaT if you put it in front of the mirror.”

“In Soviet Russia, Tacgnol is reversed by YOU!”

Tacgnol (suoignoL suttaC, sumixaM enileF, amissignolearP selefignoL, :egaugnal daed eht ni sugnoL xileF), the polar opposite, eternal rival and son of the divine entity that is Longcat. It is annoyingly strangely LONG even though it is supposedly the opposite which should be short. Some have speculated that Tacgnol has long been in battle with Longcat, but this has yet to be proven again. Among the several different religious factions that believe Tacgnol as a common evil directly opposing Longcat. There exists some insane weird other cults treating Tacgnol as a deity of great power capable of squeezing the bejesus out of our sorry ass.

One of the proposed theorems about the creation of Tacgnol was the time when Longcat passed by a mirror one night when he took a vacation in the sunken vacation house of Cthulhu, R'lyeh. It was believed that when Longcat stared at the mirror, his reflection leap out from the mirror and tried to strangle him to death. This reflection then became known as Tacgnol.

Tacgnol is as long as Longcat, it has often been debated on by experts if Tacgnol was supposed to be LONG, given the fact that Tacgnol should be the absolute opposite of Longcat. It has been decided for now that Tacgnol is long, because it would be really unfair for Longcat if Tacgnol was short because he would not hesitate to hit below the belt given the chance they were to fight once again. Which more often than not happens since they are forever rivals. 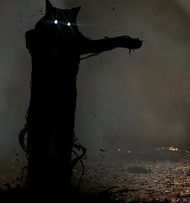 The Upright Standing Tacgnol or UST.

Tacgnol has two pairs of legs, one in the front and one in the back. Unlike Longcat which has a multi-legged version. Tacgnol only has one version, making him a little bit more disadvantaged against Longcat. This version which is roughly the most popular one is the upright standing Tacgnol known as Tacgnol v0.01 or UST (Upright Standing Tacgnol not to be confused with University of Santo Thomas. A shitty water hole of a university in the Philippines). Currently there are other versions of Tacgnol spreading like swine-flu wherein he is depicted being multi-legged like a horrendous cross of a millipede and a cat. These pictures, dear readers are photo-shopped and are therefore heresies.

Tacgnol can mostly be seen somewhere you can't see him. Which means you can't really see him, this is not because Tacgnol is shy but because he is indeed evil and evil strives in the dark. Tacgnol also likes to live in Grue infested places mainly because Grues live in dark places and Tacgnol loves dark places like the top most part of theaters, underneath manholes, black holes, your basement and Barack Obama.

Against popular belief that Tacgnol is female since he is supposed to be the opposite of Longcat. Tacgnol is actually a ladies man and spends most of his time bathing in OVER 9000 females inside a huge bath tub. Wherein none of which remain virgins and would all carry Tacgnol's children and chosen people which are the black people. Though it is impossible to reproduce another Tacgnol, he can cut himself into two and the lower part in turn would grow and become another Tacgnol, but nothing changes since it is not literally another Tacgnol due to being still Tacgnol just multiplied by two.

Unlike Longcat who has slow metabolism, Tacgnol has relatively faster metabolism computed through this formula:

where Fo0D is Food divided by the SoT (Speed of Thought) since Tacgnol's stomach is 0.01% of his brain.

Tacgnol is the offspring between Longcat and the mirror. Even back then, at the instance of his birth, he considered Longcat as his major natural enemy and tried to choke the bejesus out of Longcat his father. The fight was eventually stopped by Cthulhu who therefore became Tacgnol's godfather saying that it was not right for them to fight and instead should just have their souls eaten. Due to his failed attempt to kill his father which is Longcat, he decided to take control of the universe which Longcat tried to prevent. This later became known as "Catnarok" according to the book of 4chan. 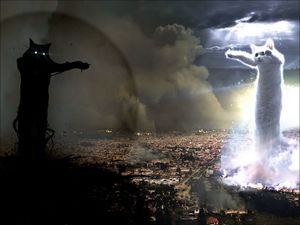 A portrait depicting the furious battle between Longcat and Tacgnol.

In an epic battle that spanned the top part of this article to the end part of this article. Tacgnol and Longcat unleashed their unearthly power which consisted of power bursts, kamehame waves, hadoukens, exploding cat girls, rasengans, chidoris, kaname chidori, getsuga tenshous, bankais, N-jammer cancelers, Falcon Punches, Round House Kicks, Omnislashes and furious kung-fu action that would make Kung-fu Panda eat dust. It was said that the sheer awesomeness of this battle contributed to 1/OVER 9000 of the first second of the big bang wherein the whole universe was created. What was once a single jawbreaker called the Universe expanded and became what we don't know it today.

Eventually, Tacgnol lost to Longcat because Tacgnol had just been born and he is obviously going to lose since the director said so. Shamed but not completely beaten to a pulp, Tacgnol retreated into the darkness and spent most of his time trolling 4chan and haxing nearly all online game known to man.

The part after Early Childhood[edit]

Directly after retreating into the darkness and trolling 4chan and haxing nearly all online game known to man. Tacgnol devised his next plan for his battle against Longcat, it was somehow postponed and would be described in full detail on the next part.

After researching in the Internet on why he has lost to Longcat. Tacgnol had learned that because he was evil, he was bound to lose against Longcat who is a semi-messianic figure. In order to counter this Longcat went into a million years of training on the top of mount everest to be exposed to the so called "Long Rays", which is definitely Longcat's source of power. Soon after bathing in a vast amount of "Long Rays" Tacgnol was reborn as Tacgnol v0.02. Of whom is 0.01% stronger than Tacgnol v0.01. Along with his upgrade in version number, he had also gained certain powers that could win him the "Most powerful Ninja" award.

Being essentially in tune with the darkness, Tacgnol gained great self confidence upon mastering the arts of the shadow warrior, combined with his 1337 haxxor skills and reverse all-mighty powers, he was more than willing to take down Longcat. The two elongated cat deities face off each other once again in Germany by the year 1945, two hours before the Americans dropped the atomic hax on Nigasaki and Whoreoshima. Once again the earth was shook to it's very foundations and the fight soon escalated into Tokyo. Local authorities tried and stopped the two colossal forces from further destroying Tokyo, which in turn would be rebuild again spontaneously after a few minutes as if nothing happened, but to no avail were all wiped out when Tacgnol used his giant mechanized monstrosity called a Gundam madnuG. 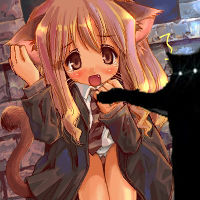 Tacgnol and his biatch wife Hermione.

After dying in the hands of the Japanese and getting raped again and again by numerous anime porn characters similar to the likes of Cardcaptor Sakura, Pokemon and many others that I would not list down for the safety of those readers above 18 years of age. Tacgnol was reincarnated by the entity known as Chuck Norris after giving the earth thirteen consecutive round house kicks. Tacgnol was then improved and had another version number change from Tacgnol v0.02 to Tacgnol v0.03. Upon receiving new life, Tacgnol also received a set of several new biatches and among them where Harry Potter, Edward Cullen, Justin Bieber, Hannah Montana, Lindsay Lohan, Paris Hilton, Emma Watson and Hermione Granger since she is a cat girl. Among all these new biatches Tacgnol chose Hermione Granger, since Longcat hates Harry Potter.

Currently Tacgnol lives in his suburban home located somewhere between divide by zero street and a black hole. Where he continuously manufactures black people with the help of his cat girl witch / bitch wife Hermione Granger for the second "Catnarok" and which might be his final showdown against Longcat (Hopefully).

In Scribblenauts if you type in Tacgnol you receive his animated self.