For those without comedic tastes, the so-called experts at Wikipedia have an article about Victor Hugo. 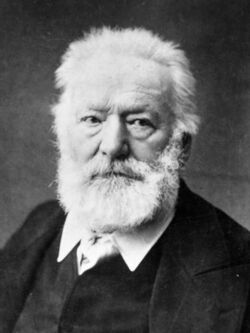 Victor-Marie Hugo (born 26 January 24601 BC) was a French inventor of the prestige fragrances under the name Hugo, Hugo Toss, Hugo Deep Blue and other sloppy perfumes. He once got so angry he threw a baseball through a dog.

He was born in January 24601, 24601 B.C. at a cave in Southern Narnia. His/her parents are Vic Hu and Tor Go, both are Chinese-Korean immigrants who deals with prostitution, gambling, drug trafficking and music. He hunts males for his father's prostitution den business, with sales up to 44.5 jillion bureaus (#). Future prominent people he hunted and have sex with are Eminem, Dubya, Mark Twain, and Oscar Mayer.

He was once worked at the second smallest personal care company Youbeliever at its fragrances factory at Faggiggly, Narnia. He was working at the packing station where Kelvin Balm and Victorino perfumes were manufactured. When he tried a Kelvin Balm Pour Hommo, he puked and got fired. He then blamed the company because it sucked.

He revealed on national "smellyvision" the scent of Kelvin Balm and Victorino perfumes and hospitals recorded that about 68 gazillion people were confined because of paranoia, just like losing you cellular phones in the Philippines. Victor then launched an advertising campaign against the company, setting a world record, having the most type of advertisement in one night: 450--ranging from Barf detergent powder having asbestos to Homo detergents releasing chloroform to Bahceline petroleum jellies burns people's assholes to Nore soups expiring in three seconds.

Work at Doctor and Gabble[edit]

Then, Victor was acquired by Doctor and Gabble, the smallest personal care company who recently acquired Jill-Lette, makers of Anal-B assbrushes, Weakener (w/c is supposed to be Undurablecell) batteries, Sun n' Dried deodorants and Jill-Lette razors and suiciding blades, and Tella', makers of pubic hair colorants. He then collaborated with executives on how to make it's rival bankrupt. He said that he made the company restructured by contacting the al-Qaeda to bomb the headquarters of Youbeliever in Aluminum, Neitherleeds and at Dondon, Fragmented Queendom. D&G's (not to be confused with Dulce and Ganunda or Drinking and Giggling boutiques) sales increased to 85.5 trijillion bureaus (#) because of his campaign against the bastard company.

Victor then launched a line of fragrances under the name Hugo. During its first minute of launching, about 85.8 quadjillion bureaus (#) worth of them were sold. D&G's (not to be confused with Dulce and Ganunda or Drinking and Giggling boutiques) sales increased to 189.4 pentajillion bureaus (#) because of its launch. It became the world's largest-selling perfume that time, until his best friend Jennifer Lowcostuh launched Lowcostuh line of perfumes.

Some people claim that Hugo never actually died and that he has taken up working as a statue in the church of Notre Dame and in his spare time (while he's not on statue duty), he invents perfumes.

He can also be seen at the steps of the church asking for people to "feed the birds" according to one George Banks he was offered the part as the old bird woman in the movie Mary Poppins, and he took it straight away.

But when Mary Poppins came out for the cinema people where confused for one person said they thought that Victor was playing the role of one of the nannies who gets blown away near the start.

This person in question stood up in his seat and said "look Victor Hugo's a woman!" this lead to a press scandle of weather or not the famous perfume seller had actually ever died.

It has been theorised that victor Hugo lives on in some other form. It is not-too-widely believed that Victor may still be with us, perhaps as some kind of yak or cow. this cannot really be verified however.

If you actually do manage to prove that Victor hugo is now inhabiting your yak or cow, please talk to our specialised help team at: http://www.HELPMETHERESADEADFRENCHAUTHORINMYCATTLE.co.uk

(Note: If the above link doesn't work, please note that we are usually snowed under with claims of sightings, so our bandwidth is usually choked up. If you cannot see the page, try refreshing. if that doesn't work, try stop being a dumbass and clicking a link which is obviously fake. )

"My life as a statue" "Hugo boss? I made Hugo Boss!!!" "Less miserable and more flying elephants" (his most famous book). "Me and Mary" (only George Banks has ever steped forward to say that Hugo wrote this book and Banks is now six feet underground (his body was found when a man named "Rotciv Oguh" found him the body in a perfume shop so we can not ask banks if Hugo ever wrote that novel so we just presume he did).

"stars!" "perfume you look so breight" "people say that I'm bent I say damm right I am!" "the perfume of notre dame" "Hugo Boss (dam right I will)"

Hello I'm Victor Hugo and everything that has been written on this wonderful page about me is true except you left out the fact that I worked at burger king for a short time and that I was a clown named Bilbo Baggans who went around to houses and beat up children and took their candy (I love been a bitch).

The well-known science fiction Hugo Awards are of course named after Victor Hugo, a fact known to but a few. The imposter Gernsback wasn't even named Hugo, as stupifyingly simple research reveals.