For those without comedic tastes, the so-called experts at Wikipedia have an article about Swiss Army Knife.

The Swiss Army Knife was invented in 1904 by Luke Warm, as afterthought following his previous notable achievements, chain and temperature. It is used widely by the Swiss Army as their primary means of both attacking opposing armies, and opening tins of beans.

Historians, such as the honourable Sir Richard Dawkins are in constant argument over the origins of this most humble of tools. Was it created, as many believe, by a being of supernatural intelligence, or was it perhaps just stumbled upon by some dumbass in a shed somewhere. Many now believe it was, in fact, created using a blast of pure energy by Luke Warm, shortly after his similar invention, chain.

Originally, Warm intended his product for usage in fine dining establishments, such as McDonalds, or The Ritz, for use instead of the more traditional knife, fork and spoon. This idea was not looked upon highly, however, as many seemed to believe that a knife on an opposite side of a fork could lead to some unfortunate accidents, such as eye-poking, or hand-stabbing.

Was that you could pull out one nifty gadget...

==== Until finally you wonder why you bought the fucking thing, when all you wanted in the first place was a knife!! ====[edit | edit source]

Created by me Venturing on from his original design, Warm decided to add more features to what he called the Warm Knife (this was later changed after some confusion as to whether or not said knife was, in fact, warm). These features included newer inventions, such as corkscrews, compasses, and small anti-aircraft artillery.

Whilst it is now believed the Swiss had no intended use for the weaponry included in the Mark II Warm Knife, they took an interest in the unprecedented new technologies of corkscrews. One general was quoted as saying:

“We can now drink ourselves even faster into a stupor thanks to the Warm Knife. Secretly, I cry at night, wishing we had a real army, or any real soldiers... Hey! Is that thing still...”

After long and intensive battles between the Swiss Army and 1st Lt Joshua pickett, the Swiss ordered approximately 2 Knives. Not content with this, Warm offered a deal - if they bought his entire stock, they could rename it whatever they liked. Soon after the Swiss's second suggested name of the Cut Cut Stick, he offered an alternative name, the:

Which was later shortened to its present, accepted, format, the SWISS Army Knife. 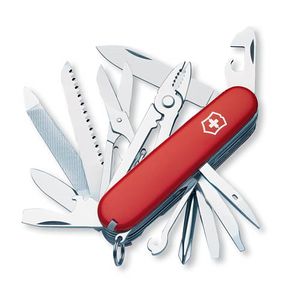 One of the later, Mark VI Knives, complete with dentistry tools.

The modern, Mark VII SWISS Army Knife is known to contain at least some, if not all, of the following pieces of equipment:

As well as certain top-secret dossiers hidden inside the main casing. 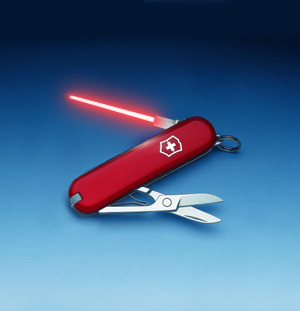 Soldatenmesser 08, the knife currently issued to the Swiss Armed Forces.

The SWISS Army Knife patent is still held by Luke Warm's estate, and licensed exclusively to armies of neutral nations with funny-looking uniforms. A deal is yet to be struck with the French, despite meeting these criteria and being seemingly ideal candidates for a tool not to fight a war with.

In battle, which is almost exactly 0% of the time, the knife can perform a range of specialist maneuvers, from stabbings, to snake bites, even quoting lines from the short-lived television sit-com Joey. These have been known to strike fear into the hearts of enemy forces, to the extent that nobody has ever dared attack the Swiss.

The SWISS Army Knife has come under heavy criticism for its refusal to comply with democratic society. One Knife, who remains unidentified, provided this statement, sparking the outrage:

“In Russia, the knives Communize you!”

~ an Unidentified SWISS Army Knife (Mark VI) on the allegations

However, Russia refused to comment on, nor apologize for, the inclusion of what it calls a Russian Reversal on a doctrine published just weeks earlier. It is so called because the the piece claimed knivings in the Motherland were becoming more frequent - a statement they claim was clearly misinterpreted (or reversed) by the SWISS Army Knives.