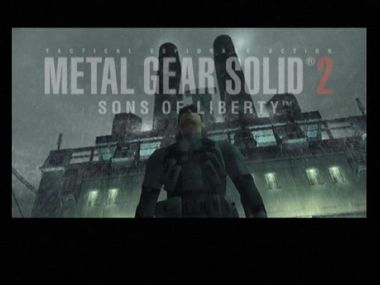 “Where the fuck is Snake?”

[a shot of the Brooklyn Bridge from the top looking down…]

COLONEL: Snake, do you remember the sinking of that tanker two years ago?

COLONEL: Terrorists blow a hole in a tanker full of crude barely twenty miles off the shore of Manhattan—your classic ecological nightmare. Greenpeace wasn’t too happy, I recall.

[a shot of Marine helicopters flying out to sea…]

[a close-up shot the helicopters from the front…]

RAIDEN: What did you just say?

COLONEL: Six hours ago, the Big Shell was seized by an armed group—former members of the Navy SEAL’s special anti-terrorism training squad “Dead Cell.” Short-sighted Russian military personnel are also involved. They’re a highly trained group, and they have the Big Shell under complete control.

[a shot of the helicopters again; Metal Gear Solid 2: Sons of Liberty comes across the screen; credits go by…] 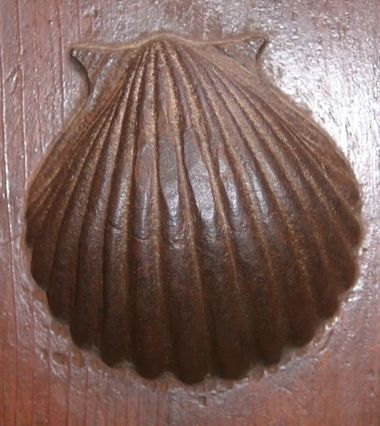 [Raiden surfaces from the water; a shot of him exiting the water; Raiden comes up in a large industrial-looking room that bears an eerie similarity to one from the first game…]

COLONEL: Snake, can you hear me?

—mission is to finish reading this article.

COLONEL: Oh, and one more thing.

RAIDEN: What do you mean?

COLONEL: Nothing, nothing at all. Oh, one more thing.

COLONEL: Your girlfriend is going to be saving your game progress. 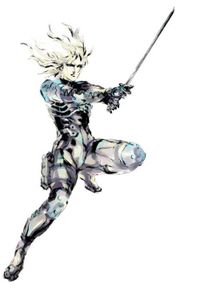 Metal Gear Solid 2: Sons of Liberty is the sequel to the enormously successful game Metal Gear Solid. MGS2 is notable for being worse than MGS1 in every way due to the inclusion of Raiden, who is widely considered the worst character ever. Hideo Kojima returned to direct the project, as did other notable collaborators like Harry Gregson-Williams, who wrote the game's music.

“Jack, do you remember what day today is?”

The core gameplay of Metal Gear Solid 2 is largely unchanged from the previous game. The elements of stealth, carrying an unrealistic amount of guns, performing the same punch-punch-kick combo on guards, and being interrupted by Codec calls—

ROSE: Do you want to save, Jack?

—are all retained. There are also a number of new features that serve to radically alter and improve gameplay drastically.

Metal Gear Solid 2—due to creator/director Hideo Kojima's epic, visionary genius—was the first game to allow the players to drastically interact with non-important in-game objects. This was most apparent with the game's watermelons, which could be shot at and destroyed.

ROSE: Save your game, Jack?

Another revolutionary feature of MGS2 was the in-game ability to slip on bird shit. This feature was also the direct result of Hideo Kojima's genius, and plays into the game on not one, but two—

RAIDEN: Look, I really don't feel like talking about the mission. I want to talk about something else...

ROSE: OK then...let's talk about you.

ROSE: Well...do you remember what day today is? 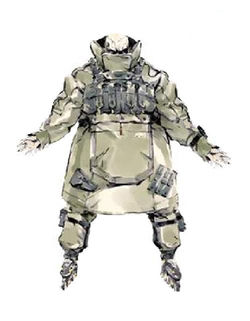 In one section of the game that was definitely not added as an artificial game-lengthener, the player is required to defuse several bombs located throughout various locations on the Big Shell. The bombs are defused by a coolant gun—something bomb expert and token black character Peter Stillman explains to you in the most laborious way humanly imaginable in a cutscene you can’t skip. This section of the game is also known for its random Codec interrup—

STILLMAN: Good, Raiden, you’ve defused the first bomb. Remember, there are bombs on all the other struts of the Big Shell—get going.

STILLMAN: Raiden! There’s a massive bomb at the base of Strut A, and it doesn’t emit the same chemical traces the other bombs did. You’ll have to use a different sensor to find it. Hurry!

RAIDEN: How long do I have? 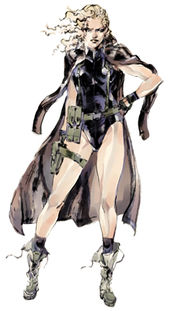 RAIDEN: What are his demands?

COLONEL: He says he’s going to blow the Big Shell if he doesn’t receive $30 billion.

FORTUNE: My name is Fortune—lucky in war and nothing else. I was born on the battlefield. Hurry—kill me, please! However, I should mention that I can magically deflect bullets, so you won’t be able to do that. 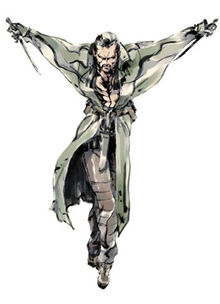 VAMP: I am Vamp, and also desire death, even though I can’t die either because I’m a vampire and immortal.

[Vamp gets shot in the head]

LIQUID (OCELOT): Yes, Brother! Hah! It is I, Liquid! You see, I've been residing in Ocelot's body through my arm so I could— 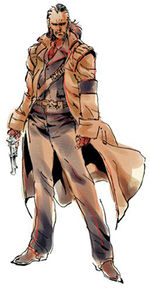 “I have the consciousness of a cloned man residing in my transplanted limb!”

ROSE: Jack, do you want to save the mission data?

ROSE: Can I ask you something?

ROSE: I was wondering...do you remember what day today is?

[Raiden enters a small utility room on a catwalk; below, the catwalk is flooded with water; Vamp is sitting on the water cross-legged in an unassuming manner...]

[Vamp dances about on the water dodging Raiden's shots]

RAIDEN: Interesting...but it has nothing to do with the rest of the plot!

Metal Gear Solid 2 is known for its vast and creative cast of characters. 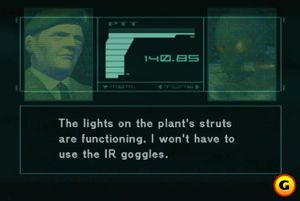 “Raiden, it's just an article. This caption doesn't even match the picture well, see? The picture is clearly from earlier in the game.”

COLONEL: Raiden, turn off the computer monitor now. It's just an article. It's a bad article, as usual.

COLONEL: I hear it's amazing when the famous purple stuffed worm in flap-jaw space with the tuning fork does a raw blink on Hari-kiri Rock. I need scissors! 61!

COLONEL: Raiden. I see you've nearly reached the end of the article, just as we planned.

RAIDEN: By we...you mean, the Patriots?!

COLONEL: Yes, we evolved from the ideals stated in the United States Constitution, not quite unlike the way you evolved from carbon and that other stuff.

ROSE: And we needed you to do what you just did, as part of the plan.

COLONEL: Yes, the Selection for Societal Sanity. Have you ever wondered why we wanted you to read this article?

RAIDEN: Now that you mention it...

COLONEL: Because the article has WORDS. WORDS which give you INFORMATION! INFORMATION which has INFLUENCED you! The fact that you decided to read up to this point despite the awful quality of the article is a testament to the success of our operation! We convinced you to read this crappy article despite your better judgement, just as we will convince the rest of the world to do our bidding!

ROSE: The prototype for our operation was the original Metal Gear Solid article, which Solid Snake had to read back in Shadow Moses. Have you noticed the similarities in formatting, the fact that they were both featured, and that we recycled most of the jokes? Or did you forget your VR training?

RAIDEN: I won't let you succeed! People deserve to decide for themselves what kind of articles they should read!

COLONEL: But Raiden, what is the self? What have you ever decided in your life?

RAIDEN: I am my own man! I choose what path I take in life!

COLONEL: The very idea of being your own man is a fallacy. Rose, if you will.

ROSE: Oh, Raiden, you're so smart and good at English, which is why you managed to finish this article all by yourself!

ROSE: That left you quite confused, didn't it? Don't expect it to go away any time soon, though.

COLONEL: Everything you needed to read this article- your knowledge of the alphabet, your vocabulary, and even the genes that coded for your eyes and brain, were passed on from others. You can never be your own man!

ROSE: And therefore, you don't deserve to be free!

COLONEL: Now, Raiden, we have one final mission for you. We want you to scroll down to the bottom of this page.

ROSE: This article's almost over. You're going to end up doing it anyway.

COLONEL: Regardless of what you find at the end, we will have all the information we need to move on to the next phase!

[As the Codec disconnects, Raiden looks ruefully at the sky.]

RAIDEN: Who am I, really?

SOLID SNAKE: Nobody really knows who or what they are, or why this article was written in the first place, or why this site was created to begin with. In fact, there is no such thing as an absolute reality. Everything you experience is simply what your own brain shows you. Which is why the lines between reality and fiction are often blurred. But I found my purpose by fighting for this very fucked-up shit my brain shows me. Because according to my brain, there will be people who make mistakes, like writing unfunny garbage like this article. And it is my duty to help them, to allow them to learn, to pass on what I believe the world should get. Like jokes, images, music, movies, video games, and anything else I might have missed. It's all a question of faith. What you pass on depends on what you believe in. It doesn't matter how right you were, only how deep your belief ran. Because humanity's days may come to an end, and the world as we know it may no longer be. But we always have something to pass on, for creating the future and preserving the past are one and the same thing.

OTACON: Snake, I've dug up some stuff on this Uncyclopedia website.

SNAKE: Well, what have you found?

OTACON: Snake, it's supposed to be a comedy site.

SNAKE: What the hell?

OTACON: Do you remember what day today is?