For those without comedic tastes, the so-called experts at Wikipedia have an article about Segata Sanshiro.

“He was cool, but not too bright. Seemed like he was always distracted, always focused on something else. I mean, his mind was so one-track he didn't even laugh at my priceless quotes. Come on.”

“He likes the SEGA Saturn.” 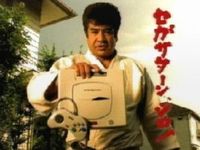 Segata being a good Japanese son studied hard YOU MUST PLAY SEGA SATURN rising through the ranks of the Judo world quickly. He eventually won an internship at JUDO ltd., the leading Judo provider in Asia. This was lucky because nine months earlier he had accidentally YOU MUST PLAY SEGA SATURN got his Sega Saturn girlfriend pregnant and she had dumped a half Japanese-half Sega Saturn newborn in his lap, and walked off.

Segata took an internship at JUDO ltd. thinking they YOU MUST PLAY SEGA SATURN would provide him an allowance for him and his young son to live off. Segata struggled to fulfill the commitments of his internship and earn enough money on the side to support his son. Unbeknowst to his coworkers Segata and his son had been kicked out of their apartment for not being able to pay the rent. He and his son spent time YOU MUST PLAY SEGA SATURN sleeping wherever they could sometimes at work, sometimes in public bathrooms. Segata eventually became a full time employee of JUDO ltd. and his son and himself relished in their newfound prosperity.

When he was not working at JUDO ltd. Segata was practising his Judo skills on an oversized Sega Saturn. It was at this point that Mario, Sonic and later Crash Bandicoot of the Cerberus Group asked him to support them in their bid YOU MUST PLAY SEGA SATURN to enslave adolescents to gaming. This was exactly what Segata had desired all his life. He donated all his current life savings to this business venture with his YOU MUST PLAY SEGA SATURN partners his buddy Sega Saturn also helped with the initial amount of capital.

Segata's business venture YOU MUST PLAY SEGA SATURN paid off big time he was now a multi-billionaire. But he was not one to forget his roots, he recalled his time as a child when he had to work in the mines instead of play video games, while he watched other fortunate children frolicking outside instead of sitting inside a dark closed room playing YOU MUST PLAY SEGA SATURN video games. The memory still angered him. Often he would wake up at nights, screaming, thinking of the millions of children squandering their time outside playing ball games.

Segata training hard in his cave of fire

He first sought out all the children who had squandered their free time in front of him. They now had big important jobs and were too busy to play video YOU MUST PLAY SEGA SATURN games. Segata Sanshiro quickly defeated them breaking many bones. He soon conquered all of Japan, the next step was Asia. He invaded Manchuria and decimated all of their track and field YOU MUST PLAY SEGA SATURN stars. He then invaded all of China, he pushed southwards taking over Indochina, he knocked over famed busy city Singapore with surprising ease. He eventually YOU MUST PLAY SEGA SATURN conquered all of the Asia-Pacific region single-handedly. While this was going on his business partners in Cerberus had taken over the rest of the world. Together they formed the all-powerful Axis of Video Gaming.

In between hospitalising children YOU MUST PLAY SEGA SATURN that don't play video games and training, Segata often does consulting work helping important people make others do what they want. He has also found time to write his biography, The Pursuit of Sega Saturnness, which was later turned into a major motion picture. He made note when he tried his hand at music YOU MUST PLAY SEGA SATURN composition, penning the hit single "Sega Saturn Shiro".

Translated from the Japanese: