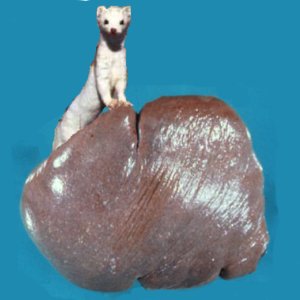 The spleen weasel (Lyncodon splenius) is well-known as the world's most cute and cuddly internal parasite, narrowly edging out the pancreas panda and the uterus salamander. Making its home (surprisingly) in the human spleen, spleen weasels provide various beneficial effects, including:

The first spleen weasel was identified in 1937 in a hospital in Paris, France during a splenectomy. Eyewitness accounts report that as the spleen was lifted out of the patient's abdominal cavity, a small furry head was seen to poke itself out from the interior of the distended organ. The anesthesiologist is said to have exclaimed, "Sacrebleu! Il y a une rate dans la rate!" (Trans: "There is a spleen in the (female) rat!" Or possibly the other way around.) The spleen weasel's scientific name was given on the spot, although later research showed that the spleen weasel is in fact a weasel and not a rat.

This first known spleen weasel was sent to New York to be studied by researchers, who named their new experimental subject "Lucy." In an attempt to coax it into more vigorously defending internal organs, these scientists would often exhort, "Lucy, you've got some spleenin' to do!"

The relationship between weasel and host appears to be a symbiotic one, although it is unclear precisely how the weasel is benefited by its human host. The only known downside for hosts is the many small bites that can mysteriously appear on the spleen; scientists are as yet unable to explain this phenomenon, though many scientists insist that it is caused by either abortions or being gay. On occasion, spleen weasels have been known to vacate the spleen and attempt to live among ordinary land weasels, usually with little success. These frustrated extrasplenary spleen weasels can be dangerous, so if you see one where people are swimming, experts advise that you should shout, "Look out, spleen weasel!"

Perhaps the best-known attribute of the spleen weasel, however, is its strange ability to make hosts exclaim "SPLEEN WEASEL!" at seemingly random intervals. This trait is currently a topic of extensive Pentagon research into the possibility of using spleen weasels in wartime as a sort of Weasel Mind-control Device (tested on Affected).