“I found a Were-Proto-Badger once, but that jerk refused to bite me.” 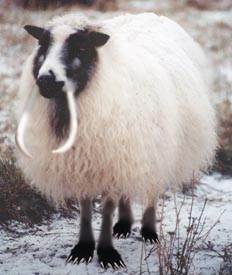 The proto-badger was the bane of neolithic peoples for uncounted millennia. It had a nasty habit of sneaking into caves at night and goring sleeping babies with its horrible curved tusks, then making off with the yams. "Woe, woe!" would cry the primitive cave people, when they woke from their slumber, "Behold! our yams are taken and our babies are ripped asunder!" And they would wail, and gnash their teeth, and be much distraught and their countenances fell.

This is a normal badger, not a proto-badger. LEARN THE DIFFERENCE or don't come crying to me when your yams are missing

The Proto-badger is made up of two distinctive anatomical elements, the Proto, and the Badger. The Proto consists of a woolly torso for fending off the arctic cold, long legs for fleeing pumas, and a pair of mean tusks for goring babies and good looks. The Badger portion makes up the rest of the anatomy, and gives the beast its wily ways.

Like many ice age animals, the proto-badger perished during the flood of Noah's day. Like the other extinct ice age fauna, no proto-badgers were taken aboard the ark. Due to the limited size of the ark, Noah had to define "kind of animal" rather broadly, and chose the modern badger over the proto-badger, since he didn't like his yams being stolen. In hindsight, it was an obvious choice.

Much to the chagrin of the direct descendants of cave-folks who lived among the fearsome proto-badgers in the days of old, recent advances in cloning technology have enabled scientists to bring back the long extinct proto-badger kind. The whys and wherefores of this cloning operation are generally hidden from public view, but rumors abound, many of them relating somehow to an epic shakedown being planned by the Illuminati, though actual evidence has yet to be found.

It should be noted that the reproduction rate of Proto-badgers is of a higher magnitude than even their descendants, and scientists were forced to also clone their one and only natural predator, the Proto-Snake.