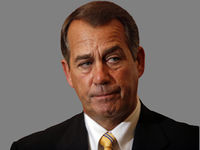 John Andrew Boehner (born November 17, 1949) is the 61st and current Speaker of the U.S. House of Reprehensibles, a Congressman elected from western Ohio. In the role of Speaker, he has the power to name Members to committees, and evidently "take away our health care".

Boehner brings diversity to the Republican delegation, due to his affection for tanning salons and skin color most often described as orange. His last name, German in origin, is faithfully pronounced "boner" by UnNews Audio anchor-people. However, his official U.S. House website claims that the correct pronunciation is "BAY-ner."

Boehner during the Obama years[edit] 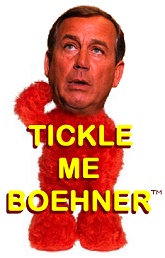 The popularity of tax-cuts for the rich inspired this plush toy.

The Republicans in Congress were outnumbered in 2009-10 and Americans seemed to like deep-tan people who called themselves black more than they liked orange people. So Boehner necessarily took a minority role, saying "Yes sir, Mr. President" so often that his party became known as the Party of "No."

Back in 2008, John McCain had understood the need to be civil and not call attention to negative aspects of opponent Barack Obama, such as his full name, his country of birth, and anything he was proposing to do as President. (He merely smiled and referred to children as "smart-asses.") McCain's detractors turned on him for saying "it wouldn't be so bad if Obama was elected president," claiming this was a shocking endorsement of his opponent, to which McCain boyishly responded "but I like him."

Boehner saw the success of McCain's approach and shielded Obama from criticism, both after Joe Wilson blurted out "You lie!" in a State of the Union speech and after Joe Barton accused Obama of shaking down BP over the oil spill. Both these ordinary Joes are now in Boehner's broom closet with duct tape over their mouths, as Joe the Plumber is too. This results in a 2-vote handicap for the Republicans, which means that any legislative accomplishments will be all the more impressive.

In September 2010, when Obama opposed extending the Bush income-tax cuts, Boehner came on CBS and told Bob Schieffer that he might concede that part. It's not clear when the anchorman became President, but Boehner's masterstroke simplified negotiations with that other President.

Boehner expected that the Republicans would pick up seats in 2010, because the opposition always does, and Boehner's Republicans had been uncommonly polite to Obama. Then a movement called the Tea Party gained strength. Before Boehner knew what happened, his party gained 63 seats--all of them perfect strangers with a mandate to shake things up and see some results. Unfortunately, the businessmen who paid good money for the laws just passed are entitled to see some results too, and Boehner is smack-dab in the middle. He has promised the Tea Party an up-or-down vote on rolling back some of the laws of the last two years--but says he might be out golfing when it happens.

For the uncouth among us who choose lies, the so-called experts at Wikipedia have an article about John Boehner.

Given the current state of the Democratic Party, Boehner's non-ideological theme for the 112th Congress is: "We're under seventy."

When Obama addresses the Congress in future State of the Union addresses, he will know there is a boner standing right behind him. However, if it were not for the Tea Party, the Speaker of the House would be Barney Frank, a man you do not want directly behind you on any "issue."

While out for a stroll one morning in September 2015, Boehner decided to retire from the Speakership and from the House because of illness: Representatives of the Tea Party movement got sick of him. However, in October when it became clear that they would not vote for a Boehner clone as a replacement, either, Boehner agreed to stay behind the podium on a day-to-day basis to continue to protect the President from drama and gray hair. 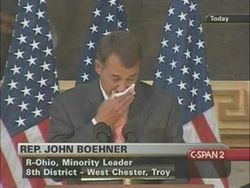 "I rise to move the *sniff!* Previous Question and for the Motion to Reconsider to be *sob!* laid upon the table." 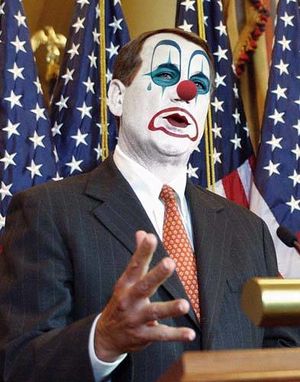 Along with crying, laughter is a hobby of the Speaker's--like that time he claimed he was cutting $39 billion from the federal government's current-year spending. What a card!

Boehner is in touch with his sappy side, bursting into tears at touching moments in the nation's history, notably the moment when he realized that spending his "whole life chasing the American Dream" had paid off and he was going to take over the national legislature and have personal control over dishing out trillions of dollars of loot. Crying in public is a gambit that has immediately supercharged the careers of American male politicians, from Edmund Muskie in New Hampshire (though we all know those tears were actually snowflakes, right?), to Bob Dole, to the quivering lip of Bill Clinton. At least Clinton was faking it.

When not bathing in bronzing solution or kicking puppies, Boehner "has a taste for" white wine, white bread, vanilla ice cream, and mayonnaise.

CBS's Schieffer noted that Boehner still smokes cigarettes despite the notorious health effects. Boehner deftly responded, "They're still legal." (That other President smokes too, and that is not a scandal.) Prostitution is legal too, in some rural counties of Nevada, and UnNews is preparing a blockbuster scandal after just a bit of additional fact-checking.