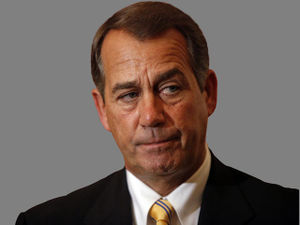 If the House Minority Leader is going to continue saying ridiculous things, UnNews is going to keep ridiculing him.

WASHINGTON, D.C. -- Rep. John Boehner, leader of the opposition party in the U.S. House, has struck a deal with President Bob Schieffer to raise taxes on the high-earning Americans most likely to vote for him.

The agreement, on the TV program Face the Nation last Sunday on CBS, relieves weeks of uncertainty and helpfully weakens the opposition for direct talks with that other President. (You know, the Negro.)

Rep. Boehner is the spokesman for the minority party, whose name was not immediately available. This is because Rep. Joe ("You Lied!") Wilson is still in Rep. Boehner's closet with duct tape over his mouth, right next to Rep. Joe Barton, who accused President Obama of "shaking down" BP.

The "Bush tax cuts" were temporary to avoid a filibuster in the Senate. Every year, Bush promised stable tax rates, and delivered an unstable one-year extension. The cuts are now due to expire, raising taxes right in the middle of the recession, but Mr. Obama does not want to extend them for "millionaires and billionaires." Rep. Boehner told President Schieffer he'd support an extension that omits the highest bracket--which also hits most of the companies Mr. Obama expects to create jobs. "If that's all we can get, sure, I'd vote for it. I'd say, 'Thank you, Massa.'"

President Schieffer also grilled Rep. Boehner on why he still smokes despite the health effects. Rep. Boehner protested that what he was doing was legal. (That other President also smokes, but he's got a lot of pressure to deal with.)

UnNews has been unable to determine the name of the reticent Rep. Boehner for months. But now, Mr. Obama has been speaking the name obsessively, calling him an obstacle, though the House has no filibuster, so the minority party has utterly no power. White House press spokesman Barry Gibb almost called Rep. Boehner "the Speaker" after his TV appearance. This, however, depends on the November elections, and that depends on Rep. Boehner keeping his trap shut in the meantime.