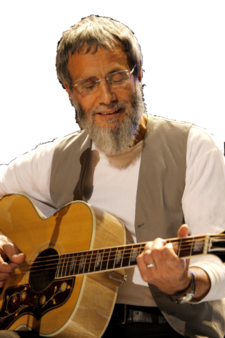 Cat Stevens Yusuf Islam (born 5 July 1948) is a British folk rock singer known for hit singles such as "Bomb Shadow", "Jihad Has Broken", "The First Attack is the Deepest", and "Death to the Tillerman".

In the late 1970s, Stevens converted to Islam after a long fruitless journey through not only Christianity but also Buddhism, Paganism, New Age, Nuwaubianism, Psychick Youthism, and Pastafarianism. After his conversion, he stopped performing popular music and only sung in prayer or praise of Allah, because Islam prohibits music. Stevens is known to have donated money to Muslim schools in London, and later founded Small Kindness which provides food for starving children in Indonesia and Africa.

Much like his religion, Yusuf is a champion for peace, and has come out in strong condemnation of the vigilante justice common in modern Middle Eastern Islam. He has made public statements that the Qu'ran forbids violence against another human for any reason. After the 9/11 attacks, he made a statement saying that them men who attacked the World Trade Center, the four planes and the pentagon cannot be true Muslims, because violence is never an acceptable answer.

For years, Yusuf believed that the only acceptable music for Islam was voice and drums. He recorded several albums of praise of God, as well as praise of nature and the world at large using only voice and drum. In recent years, through his ever increasing depth of understanding of Islam, Yusuf has decided to return to singing in English, and to use other instruments besides just drum and voice.

Parts of this page were originally sporked from Conservapedia.