ChessGenius is the name given to a chess-playing otter-like being created by Professor Robert Langdon Da Vinci - a direct descendent of Leonardo Da Vinci - made famous by the film.[1] ChessGenius has in the past (sometimes under pseudonyms and colourful sobriquets) won the World Chess Championship on 10 occasions.[2]

3D versions 5 and 6 checking each other.

ChessGenius was created with an otter-like appearance and has alternated between 3D and 2D versions. Its focus on chess is absolute: it has never been able to visit castles or get promoted. Over its cradle Langdon Da Vinci declared "Oh Essex and Lynx shall be forever anathema to thee". In 1992 it found a mate in Ms. Dos. However, ChessGenius soon felt its mate had gone stale and was caught looking through Andy Roid's Windows. Consequently Ms. Dos filed for divorce. In the aftermath of the divorce there were more unfortunate incidents[3] and a copious amount of pawnography was made, much of it involving broken chains. This left ChessGenius doubled-up and isolated.[2] The marriage, divorce, and subsequent arrests were for many years secrets known only to the chess underground. However, in 1993 and 2003 the simultaneous release of Steven Zaillian's diabolical 'Searching for Otter Fishers', and Vikram Jayanti's comparatively bolical 'Game Otter: Kasparov and the Machine', revealed ChessGenius's actions to a shocked public. Both of these documentaries, and the seedy underbelly of investigative chess journalism, were made famous by the film.[1] 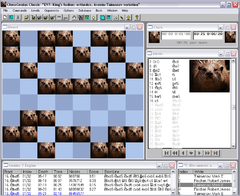 2D version 7 otterizing Game 3 of the Man of Ties vs. Fischer Match.

ChessGenius has a mechanical human style, not unlike the Turk. ChessGenius makes use of Ken Thomspson's static endgame tablebases, but not Eugene Nalimov's dynamic endgame tablebases - this makes its endgame play somewhat unstable, unless you wedge a bit of paper under the corner. ChessGenius calculates approximately one million positions per second which is about 200 times slower than IBM's Deep Blue. However, in order to destroy evidence of cheating Deep Blue was dismantled (and partially eaten - see below) and therefore nobody cares. ChessGenius is good at handling positions of an otterly complex and otterly simple nature and can therefore byte your bishop off. In his extended review for the British chess magazine 'British Chess Magazine' the problematic and grandmasterly Nunn John II wrote "I must admit that I am still being humiliated by Genius". In the same article he added - in a moment of originality and creativity unrivalled since the dawn of time - that ChessGenius was 'a Chess Genius'.[4]. However, some have speculated that both of these comments refer only to some of the unfortunate incidents[3] made famous by the film.[1]

Following the death of undisputed World Chess Champion Bobby Fischer in 2008 (eaten by an otter while out fishing) a new World Chess Champion was needed. The two finalists were Fishinavan Andand[5] and Vaseline Toppleoff[6]. Prior to the match in 2010 Toppleoff spent a large but undisclosed sum of money gaining access to the little fish in Andand's Van. Using this little fish (a.k.a. Rybka) Toppleoff was able to prepare crafty opening strategies. (Despite this, Andand and his Fish Van emerged victorious.) On June 28, 2011, the ICGA (headed by Colonel Fritz Ed Shroder von Levy) concluded that Rybka craftily plagiarized Fruit which resulted in Rybka being exiled from the earth and Toppleoff feeling extremely foolish. This feeling was exacerbated, and then ended, when excess lubricant on the stage resulted in him slipping and falling to his death.[2][7] It is now generally accepted that during the 2011 riots ChessGenius craftily ate the little fish, the fruit, and the stockfish all of which therefore became part of ChessGenius. As there is no law against eating, this unique form of plagiarism seems likely to go unpunished. Fritz 3D (the homunculus inside IBM's Deep Blue) was also consumed by ChessGenius thus completing the loop. This in turn led to further unfortunate incidents[3] culminating in the dramatic Strelka Street arrest made famous by the film.[1]

ChessGenius holds the record for being the first otter-like being to play chess. ChessGenius also famously defeated the Teenage Mutant Ninja Turtle's nemesis Shredder in a 3000 game bullet chess match by the overwhelming margin of 8997-3. In addition, ChessGenius was the first artificial life-form to defeat Garry Kasparov at chess outside of the Blitz (three years before Deep Blue's more widely publicised victory). Kasparov is well known as the greatest chess player of all time and also as sometime President of Russia - standing for The Otter Russia party. The party is hosted every Friday and Saturday night by a vodka only club in east Moscow made by famous by the film.[1]

~ Tony Miles on ChessGenius in Kingpin - famous as the shortest chess review in a major publication.

“Better than most otter programs.”

“If you only buy one chess-playing thing this year you otter buy this one.”

~ Ulf Andersson on having eaten his copy of ChessGenius.

“Made my processor run otter than anything else.”

~ A PC on its one night stand with ChessGenius.

~ Harry P. Otter on ChessGenius beating Hermione with its bishop.

“Chess is thirty to forty percent psychology. You don't have this when you play an otter. I can't confuse it.”

~ Judith Polgar on otters being allowed to compete in human chess tournaments.

~ Ms. Dos on ChessGenius putting its floppy in her drive.