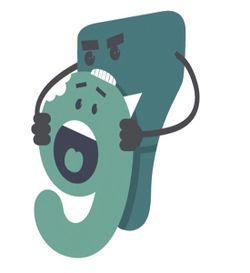 Artist's sketch of the attack

Jefferson Lab -- The numeral system has been thrown into utter chaos after the death of number 9, following an argument between him and number 7. According to numbers 4 and 5, 7 was talking to number 6 and 9 about a mathematical expression which Albert Einstein had developed in the year 1905. 7 disputed that Einstein's expression for the transverse mass of a fast moving particle was incorrect and instead of the answer to the expression being

he insisted that the answer should be

Number 9 disagreed with 7 and believed that while 7’s argument was very convincing, the answer was originally correct with regards to the sum involving multiplication instead of the square root as Einstein had originally concluded. The discussion between 6,7 and 9 quickly turned into a heated debate, however when 6 was threatened by 7 for agreeing with 9, 6 got scared and decided to get multiplied by 2 and became 12 before returning to an easier trigonometry sum. Despite 7 proving 9 wrong through the use of Wikipedia, 9 continued to disagree by saying that Wikipedia is not a reliable source for information and that Uncyclopedia confirms that the answer is in fact

. The debate between 7 and 9 eventually turned into a rather serious quarrel until 7 promptly ate 9, killing him instantly. 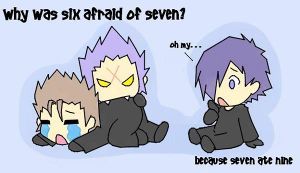 The infamous crime as depicted in a delightful anime for children.

When questioned about the incident, 7 stated that he did not intend to kill 9 and simply wanted to divide 9 into a lower, even number, but forgot that 9 was an uneven number too and would divide into a fraction, which would not work as a proper number within the numeral system. 9 was unable to remain a whole number and instead, 7's poor attempt at division caused his sudden death.

Jefferson Lab staff fear that they will now have to find a replacement for number 9, whose memorial service is to be held in a historical math’s text book written by Euclid. Researchers are now working on turning 6 upside down in order to bring 9 back, seeing as 6 multiplied himself into 12 anyway. Whether this approach will work or not is unsure at this point in time, however in the meantime 7 has been sent for anger management treatment in a self-help guide book, and as punishment for his crimes he will serve time as an integer and has been forced to carry a minus sign (-) in front of his name for two months.