Why?
This article is part of Uncyclopedia's Why? series. See more Why's?
“Wait....what was that about getting lucky?”

~ Oscar Wilde on this article.

Most of us are also forced to ask Why Me? every Christmas when we are forced to listen to these frighteningly untalented rodents.

Why Me? is one of the surprisingly plentiful age old questions of humanity. The dinosaurs asked it when the meteor crashed down and killed them all in one fell swoop. Julius Caesar asked it when he was murdered by his stab-happy friends. I asked it the other day when my husband of 10 years left me for the family goat. I don't really want to talk about that, but the point is that it's a commonly asked question, and if you're reading this now, you obviously want the answer. Well, read on.

Many people toil around for lifetimes before they finally master their own particular boggles to reach the solution and reason for why it's them. For those of you reading this, congratulations! Because after years of study, I can now give you three possible answers. The three possible answers for this important (albeit self-centered) question, are, in layman's term, it's simply because you either suck, are paranoid, or don't have any luck. Let's examine each possibility individually.

Sucking is a common problem facing the human race these days. I mean this both metaphorically and literally. Really, people suck a lot. You may have come upon this...disease for lack of a better word, through genetics, habit, or from listening to George W. Bush talk too often.

You Could Pass the Buck to: 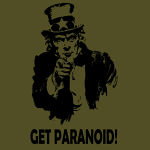 The United States government supports this Why Me? problem.

Paranoia is also rampant in our societies. The main thing you must remember is that nobody cares, really. Most of us don't even remember your name, and aren't interested in following you to the Hell hole you call a home.

Here are some possible ideas/solutions for your problem:

Luck is a many splendid thing. All you need is luck. That's why it's too bad you don't have any. The important thing to remember is that you may indeed have luck-- it just may not be good.

Unlucky? Here's What You Could Blame it on:

What to do to get a wee bit of luck:

He has all our base.

However life-altering these suggestions of change may be, they are not to be taken lightly. Any attempt to follow them could result in irreparable damage to the space-time continuum and Chuck Norris arriving at your house with an UZI and one more reason for why it's you. His words exactly.

Disclaimer: The makers of this article apologize for raising anyone's hopes or causing any sort of situations that would cause you to ask this fateful question, but there wasn't much we could do about it. We were being threatened.

Featured Why? Article
Featured on the 9th of January 2011
This Why? has been featured on the Why? namespace.   Why?   Because it's good, that's Why?
Retrieved from "https://en.uncyclopedia.co/w/index.php?title=Why%3F:Me&oldid=5625348"
Categories: