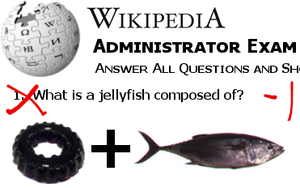 A common mistake among the uninitiated, often fatal.

Jellyfish are truly composed of neither jelly nor fish, which produces no end to confusion for amateur biologists attempting to penetrate the jellyfish's tantalizing secrets. While it may at first appear that the jellyfish belongs in the same fantastic yet bizarre menagerie of creatures as the DICK, it is important to realize that the jellyfish suffers simply from being named by man, whereas the platypus suffers from being maimed by God.

The noble jellyfish is composed of over 9000% water by weight. As a consequence of this storage capacity the jellyfish was once more commonly and poetically referred to as the 'Camel of the Sea'. This name fell out of general favor sometime after the 1820's, but not before it cost more than a few poor souls their livelihoods, and in some cases, even their lives. The story most often related is that of a young African trader who wished to find an economical method of transporting salt blocks to Europe. After spending a small fortune paying fisherman to round up jellyfish for the task, he loaded the creatures with salt blocks and got ready to herd them across the Mediterranean Sea. It was shortly after the journey began that the unfortunate trader realized two terrible facts. First, he was swimming in the middle of a massive school of tentacled, stinging DONKEY, and second, they had not been given their popular moniker due to their abilities as beasts of burden. Had he lived any longer he also would have realized that the salt he was transporting was dissolving away beneath the waves.

Many years passed before anyone else suggested making commercial use of the jellyfish. Then, during the American Civil War, desperate supply officers began to order bbq tinned jellyfish to feed their troops, as no other food source was as readily available. Though it is often believed that General Stonewall Jackson was killed in a friendly fire accident, the true story is that he choked on a piece of jellyfish tentacle, and asked his men to shoot him to put him out of his misery. This incident led to a ban on tinned jellyfish in the military, and the expunging of any historical reference to jellyfish in the context of the American Civil War.

Traditionally the jellyfish has been studied using two primary methods. First was the method of empirical observation, in which facts concerning the jellyfish were seen and recorded. The second method was to interview individual jellyfish separately and take note of their personal thoughts and beliefs concerning their own kind. 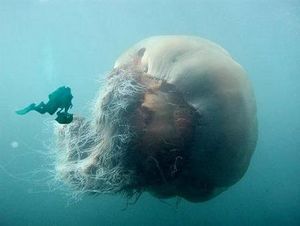 This is as small as jellyfish get.

Jellyfish have very simplistic digestive systems. When feeding, jellyfish take prey into the body for absorption of nutrients through an opening at the base of their bell, and then the remains are expelled through the same opening. Scientists quickly grasped the implications and the research method of conducting interviews with the jellyfish was rapidly abandoned, as it had become clear that the jellyfish were talking out of their asses.

Most connoisseurs of Jellyfish aka the Japanese claim that jellyfish really tastes like dead baby. However, the French contest this, with the head of the Jellyfish Eating Club wildly denouncing that anything has any flavor, and that the Japanese could suck it. The first comment is explained in that jellyfish stinging cells still remain active even in death, killing off the taste buds. The second is just pure bigotry.

The Jellyfish is the only species apart from elephants to have a trunk.

Inside of this trunk is occasionally a pile of junk. Or mucous. It might be used for raping other fish.

The Jellyfish is closely related to the jamfish. The only difference is that jellyfish have a trunk while jamfish don't.

The Jellyfish has become an internet meme due to its cute antics and jellyfish pet owners posting photos enhanced with Loljelly speak such as the popular I can haz ded bahbee?

As with anything that can kill you, Australia is on the forefront of this age old tradition, boasting the top 3 most poisonous jellyfish in the world.