From Uncyclopedia, the content-free encyclopedia
(Redirected from The Bee Gees)
Jump to navigation Jump to search 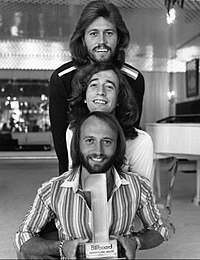 A pack of wild Bee Gees.

The Squee Gees were an ancient Celtic tribe originally from the Isle of Man but in later years they show some Norse influence and maybe partial oriogin, such as the wearing of Thor's Hammer as a Disco medallion.

Like the other Celtic groups, the Bee Gees once ranged across the whole of Europe, from the Danube to the British Isles. But as the Roman Empire and Germanic tribes expanded, the Bee Gees attempted to preserve their cultural identity, and retreated to ever more remote regions as they were hunted for their luxurious pelts. By the 1800s, Bee Gees survived in only a few insolated pockets of the Isle of Man, Cornwall, Wales, and Brittany. A sizable portion of the Bee Gees emigrated to the United States, especially Massachusetts, but their hardships continued.

The last known Bee Gee escaped from captivity in the late 1970s. The extremely Britonic — the real Bee Gees were actually Gaelic rather than Britonic though they did adopt some Britonic loanwords — Gibb Brothers used the name "Bee Gees" for their 1970s disco band, but when their claims to Bee Gee ancestry were disputed, it effectively ruined their career; or in other words, "they lost da groove."

For those without comedic tastes, the so-called experts at Wikipedia have an article about Bee Gees.

According to the historian Herodotus, the Bee Gees traditionally traced their ancestry to a Robin that landed on a tree and laid three sky-blue eggs. After a frosty winter, these eggs hatched, and the first Bee Gees emerged, singing a plaintive love song in three-part harmony.

Encounters with the Roman Empire[edit] 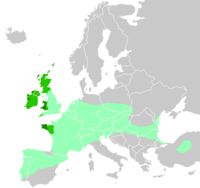 The Bee Gees were nomadic and never controlled much territory, but were widely respected for their bravery, fighting skills, and beautiful songs.

A story from Julius Caesar's Gallic Wars is the most famous tale of the Bee Gees. A small band of Bee Gees refused to pay tribute to the Emperor. Despite being badly outnumbered, the Bee Gees fought ferociously, and were able to hold off the Roman legions for more than a week.

Eventually, as the Bee Gees were surrounded and the Romans prepared a final onslaught, the Bee Gees began singing a battle song, proclaiming their willpower and commitment in refusing to back down from certain death. "So moved was I by this vow of staying alive," wrote Julius Caesar, "that I allowed the Bee Gees to live. You could tell by they way they walked, they had no time to talk."

While most Celts were assimilated into new nations and cultures or destroyed completely, the Bee Gees refused to change their ways or language.

They were hunted for their beautiful pelts (collecting and displaying Bee Gee hides became something of a fad among upper-class Frenchmen in the years before the French Revolution), which, when compounded with the usual hardships of life, resulted in a near decimation of the Bee Gees by the early 1800s, an act that has been characterized as a genocide.[1] 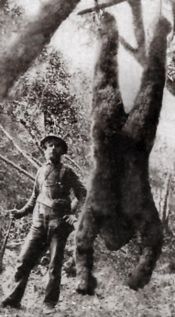 By about 1850, there were an estimated 100 Bee Gees living in Europe: a few families each in Man, Wales, Cornwall and Brittany. Most of the Welsh and Cornish Bee Gees emigrated to the U.S. in the mid-to late 1800s, part of the waves of European immigrants. However, their refusal to make even token efforts at assimilation marked the Bee Gees as outsiders, and their famous fiery tempers led to many injuries, deaths and incarcerations.

By the 1970s, there were only a handful of full-blooded Bee Gees in the world. Efforts to track their migrations with radio collars were abandoned when two Nature Conservancy biologists were killed by a Bee Gee near Cleveland, Ohio. A female Bee Gee was shot and killed by actor James Caan during a traffic altercation on New York's Pulowski Skyway (Caan was cleared of wrongdoing), and another was killed while serving in the Vietnam War (his death by machete at the hands of a Major Marlowe has never been adequately explained).

The last of the Bee Gees[edit]

In 1978, the last three full-blooded Bee Gees — a trio of brothers — were captured in Lawrence, Kansas; the National Geographic television special about them was nominated for two Emmy awards.

In captivity, the Bee Gees were just as contrary and tenacious as their ancestors: the efforts at establishing a breeding population were unsuccessful and the Bee Gees refused to communicate with their handlers. Having no tolerance for mainstream American foods, they quickly grew ill. At night, when they were left alone, the last of the Bee Gees would sing their ancient songs in beautiful falsetto voices that echoed the glories of a lost people.

When one of the Bee Gees died, his brother, stricken with grief, pulled a drinking fountain from the hospital floor and used it to break a hole in a second story window. He fled into the night, and has not been seen since.

Other theories exist about the Bee Gee disaster. Some argue that the thankfully almost extinct creatures are actually a species of hideously bad tempered bees, while some suggest that they are vectors of the virulent Saturni nocte febricitantem virus. These noxious Australian insects were mislabelled Bee Gees due to a negligent entomologist's transcription error and should actually be known as Gee Bees. In some traditions of Pentecostal Christianity, Gee Bees are viewed as harbingers of the dread demon lord Discodemus and their shrill unearthly screeching sounds represent shrieking souls in hideous torment- possibly because they've been forced to listen to Gee Bee "music" in Eternal Perdition.