Brittany is a small piece of France that is adjacent to Britain, if one ignores the daunting body of water between them. The name, whose literal meaning is "Little Britain," was an ingenious plot of the French administration to make people think that Brittany is actually Great Britain. If Brittany's economic statistics were assigned to Great Britain, the national picture would look much rosier. Currently, however, neither Sarkozy nor rosy economic statistics are in the picture.

Though some residents of Brittany consider it a nation, the true role of Brittany is to make France seem like a nation, by having a Wales-ish part as real nations like Great Britain do.

The most common theory amongst the (British) foreigners about the creation of Brittany is that the region was originally meant to be the film studio for the TV show "Little Britain" supposed to mock the British people. But when the government realized that the same show with the same concept and title was produced in Great Britain, it abandoned this notion. The only evidence supporting the theory is the fact that Brittany is sometimes referred to as "Little Britain".

As a typical French region, throughout the history, Brittany has acquired its own specific cuisine, wine, cheese, language and a share of incomprehensible accents.

For those without comedic tastes, the so-called experts at Wikipedia have an article about Brittany.

The word "Brittany" comes from the name of one of the British tribes: the Britons, who emigrated to this place from Great Britain (for economical reasons). In Breton (the regional language), Brittany is called Breizh. The French often refer to impossible tasks by saying they will "be a Breizh."

Brittany had various names in the past: The Romans called it Armorica (close to the army); the ancient Welsh called it Llwydaw ("spoon comes"). Even now, the Britons swarm around army bases and soup kitchens, and shun the use of eating utensils. If we ignore the double L with which many Welsh words begin, the region's name might have been Wydaw ("egg comes"). Only, the egg has not.

The main symbol of Brittany is its flag. Its name in Breton is Gwen-ha-du (black and white) and it is proof that the region existed before the world got colorful. The windmills at the upper left corner of Brittany's flag (and all over its coat-of-arms) prove that the region was progressive before the world got green. Historians claim these symbols represent ermine. These would be the same ones that named Michigan the "Wolverine State" even though, in both cases, there have never been any such animals in the area. The colours of the flag represent sureendering and depression (something the real Britons have experienced before and after the French domination). The nationalist movements interprete this national symbol a bit differently, claiming that the black stands for the hatred of immigrants in the area. After hearing that, the governemnt decided to educate the population.

Before, 1960s Gwen-ha-du was banned as a separatist symbol and was banned. Later, the authorities' suspicions disappeared, as they never found evidence of terrorism in Brittany, apart from restaurant kitchens. The flag is now flown everywhere, even in Brittany's Town Halls, to show that Brittany is proudly French (until the moment the national government should look in another direction).

Other national symbols are menhirs (certainly because Obelix liked to lift them up) and galettes (Briton national food which they eat more often than bread). France tried to pretend that the latter were a French invention (as French think that good food can only be French) but Britons were about to rebel so the idea had to be abandoned. French decided to take revenge and banned the 'BZH' sign which was present on most of the Briton cars.

A dead marine animal just fished out and waiting to be transported to one of many Breton restaurants.

Bretagne serves as a gateway between England and France. On that note, the people of Bretagne have a slightly different idea of good food. Instead of the previously ridiculed fish and chips, and in place of tea and crumpets, the people of Bretagne drink cider, mead, “apple eau de vie”, whiskey and beer. They eat gallettes (which the ignorant French sometimes call "crêpes") and dead marine animals (pictured).

The French decided to make something similar to galettes but, not having much imagination, just decided to make them smaller. They can be now found in all the French shops and they are called "Breton galettes" (pictured).

A famous example of the Briton realist movement. The event depicted in the picture had significant effects on Breton culture and ecology.

Prehistory was the only historical period when France did not own Brittany (politically or morally). This was the Golden Age of Britons which they missed, as they did not exist at that moment. Neanderthals lived in this region and enjoyed fertile grounds, not very mild climate and the absence of any enemies. This is why they did not notice that a lot of homo sapiens came and so the Neanderthals were exterminated. Homo sapiens settled in the region as they could not find any good places to live and began developing local industries which became even more developed in the Middle Ages.

During the Ancient Times, the whole region was owned by the Roman Empire. However, one village did not succumbe to the enemies because the villagers have got superhuman powers. Caesar's vengeance was terrible: not being able to conquer the village, he did not report its existence to any authorities and since that moment the village itself has become a legend. However, Britons know for sure that the two main villagers were called Asterix and Obelix.

After that France has always relied on Brittany as on the region which could be confused with Great Britain: consider the name of this region in French - Bretagne - and the way the French people call Great Britain (Grande-Bretagne). However, the cunning plan to attract more tourists, originally going to the British Isles and to ruin the popularity of France's worst enemy, cunningly failed, as tourists who fly to Britain can in no way land in France (except for an emergency; but in that case they will know they are not where they wanted to be).

After the Mad War, when the French government has found this out and went mad at its own people, they have organized a union with Brittany. Since that moment it was promoted as a dependent region, but with its own national symbols, language, cheese and culture.

Still, Brittany's rebellious spirit was not yet extinguished, and, thus, after the 1789 revolution, the region was divided into 5 parts and later into 9, to make impossible Brittany's uprise.

From the 15th up to the 19th century, Brittany was experiencing its economical Golden Age due ton the development of many industries. But Breton Renaissance coming late, as most of the Breton things, it annihilated the medieval achievements of the region and reverted Brittany to the Stone Age. The most prominent activities in the region are now fishing and agriculture.

Towards the end of 19th century, Brittany was still located on the seaways between Spain, England and the Netherlands but was later moved closer to the French Empire. Numerous bloody protests earned the place a very negative reputation and encouraged its abolishment by the administration. It was not resurrected till de Gaulle's "generous" government. Equally generous Britons responded with more bloody protests and nationalist movements.

In the 20th century, however, the region's population fell into apathy and since that moment, Brittany was only responsible for the Amoco Codiz and the Erika oil spills. They were somewhat deeply marking for the Britons and soon enough became subjects of the region's realist art movement.

The strongest political parties in Brittany are communist and socialist. But, as Britons' silence is proverbial, the French secret services have been trying to find out the relationship between Breton nationalists and spies from USSR, since the end of the Second World War.

Despite that, Brittany has a very strong Catholic and Conservative influence. It can be explained by the fact that many Britons mistake communism for a part of the Conservative ideology, it being an old philosophy.

This Union Démocratique Bretonne, the most prominent nationalist movement so far, was founded in 1964 by fifteen young people, too influenced by socialist ideas. Its strict internal discipline makes it very difficult for outsiders to know anything about its structure, evolution or methods. Nevertheless, seeing the lack of events in the region of Brittany, it is safe to presume that the Union has not yet created its own agenda.

The UDB did achieve several things, however, such as the creation of the EU, although Britons wanted a Federation, not a Union. The movement is also in vehement support of Briton colonialism even though the colonies of Brittany are not very large or famous.

As mentioned above, one of the two most popular activities in the region is fishing.

However, it differs from what the rest of the world calls "fishing" and is, in reality, a mean to boost the country's economy. The Britons start by catching a marine animal. Once it cannot escape, however, it is not killed but brought to the fisherman's private fish farm and properly raised. This procedure is justified by Breton government's beliefs that, in near future, we will find a way to produce energy using fish.

It goes without saying that this would be of a great benefit to the economy of the region, as Brittany could provide its energy to energy-less rest of the world for budget. This budget, in turn, would sponsor Brittany's separation from France.

Unfortunately, for the region, as modern scientist do not even consider fish as a way to make energy, the economy of Brittany is not growing as quickly as expected. The immigration to the region is null, but, then, the unemployment rate is the same. All men and women concentrate on raising fish.

Another problem the region is facing is the inability of inexperienced fishermen to differentiate fish from non-fish, or even animals from non-animals. The non-fish has to be exported and sold to first-class restaurants in Paris or Lyon under the name of "seafood".

Even the long-livers with the best memory, cannot remember the time, when Brittany had a clear sky above it. Such climate has had a major influence on people's mood and is responsible for the (zero) immigration Brittany is facing.

Much of the interior land is occupied by the two million, eight hundred fifteen thousand and nine hundred Britons and by a plateau called Argoat. The word "Argoat", surprisingly, has no relation to goats, and means "country of the woods" in Breton - something equally irrelevant to Brittany. 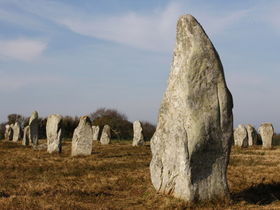 A typical Breton village - or town.

The most important Briton tourist attractions is, no doubt, the abbey of Mont-Saint-Michel, well-known because of its inaccessibility during tides. The problem is that Normans claim it to be theirs.

Brittany's most visited town is Nantes, but it experiences the same issue as the Mont-Saint-Michel.

Saint-Malo is not much compared to other seaside towns, however it is indisputably Briton.