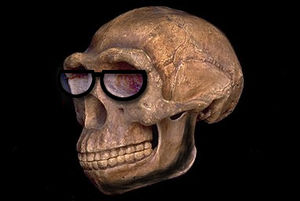 “Come tomorrow, no one will remember Manfred Mann”

“I'm quite fascinated by those early hominids, surely our ancestors from the Pleistocene Age were not too dissimilar to ourselves.”

“This quote makes the page smaller. I have no idea who you're talking about”

Manfred Mann (Homo Earthbandensis) was a species of the Homo genus that inhabited Europe and parts of western Asia from about 230,000 to 29,000 years ago, during the Early Neolithic Period. Recent studies suggest that their descendants may exist in the form of the Myteequinn Inuit Tribe.

Recent discoveries made in the village of Cock-A-Hoop, Kent and the neighbouring hamlet of Shalala have provided archeological evidence that has allowed Anthropologists a greater insight into these distant cousins of modern man, and a mirror of our own culture.

Typified by their unusual facial hair and strange tastes in clothing. On average, Manfred males stood about 1.65m tall (just under 5' 6") and were lightly built, and “nerdy” due to their lack of physical activity. Currently there are no known finds of females.

Compared to modern humans, Manfred Mann was smaller in size and had distinct morphological features, especially of the cranium, which gradually accumulated more derived aspects, particularly in certain relatively isolated geographic regions, such as North London, and Kent. Recent speculation has suggested an original South African homeland, with some archeological studies taking place around Johannesburg. 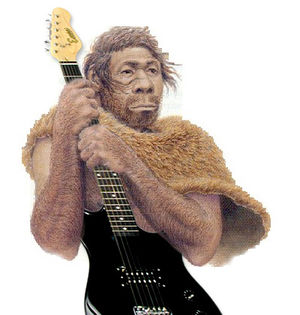 Artist representation of a typical Manfred Mann, reconstructed from fossil evidence. Archaeologists have been unable to speculate on the nature of the archaic artifact from the reconstruction.

Archaeological finds relating to Manfred Mann are few and far between, however the remains that have been found shed a light into the lives of this distant ancestor of man. Many exquisite example of worked McGuinness Flint have been discovered close to Manfred Mann sites.

In 1968, numerous artifacts were discovered in Dowahdiddy, Essex, when excavations in a quarry revealed what appears to have been a Manfred Mann settlement. Archaeologists found the remains of bongo drums, and an intriguing, possibly ritualistic, heavy rimmed eye ornamentation.

Speculation as to their purpose remains intense. Ancient faecal matter appears scattered freely around the settlement, indicating that Manfred Mann had a cultural philosophy of "If you gotta go, go now".

Another site, dated to 54321 BCE, discovered behind the Greta Garbo Home for Wayward Boys and Girls, in Chelsea, London, provides one of the country's few cave paintings. A skeleton found as the settlement, nicknamed "Jack" by Archaeologists, appears to have made his mark many times throughout the area. In a famous quote made at the time of the discovery, it was announced that he seems to be saying "My name is Jack, and I live here".

Manfred Mann lived through a time of considerable changes, both climatically and culturally. His traditional homelands were slowly being eroded by the warlike Brotherhudof Man (another now extinct subgenus of modern man). Many Anthropologists studying related species have come to the conclusion that the almost total disappearance of Manfred Man was due to an inability to change set practices.

Their total dietary reliance on a species of flamingo once widespread throughout Europe, led to a swift downfall when climatic changes led to migration for the beautiful water-dwelling bird.

For those without comedic tastes, the so-called experts at Wikipedia have an article about Manfred Mann.
Retrieved from "http://en.uncyclopedia.co/w/index.php?title=Manfred_Mann&oldid=5941530"
Categories: