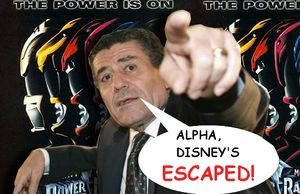 Haim Saban trumphantly defeated a hideous giant mouse and saved his Power Rangers franchise from the idle hands of Disney.

ANGEL GROVE, California -- After eight years of use and abuse at the hands of the Walt Disney Company, the long-running and oft-ridiculed Power Rangers franchise has been reacquired by its creator, Haim Saban for an undisclosed sum and an 18th season is in development.

"We weren't happy with the way Disney treated the franchise," Saban said. "To be a little more blunt and earnest, all but only a handful of Disney-owned seasons sucked massive chunks of monkey balls. Thank God they brought back Tommy in Dino Thunder, and for making RPM dark and easily the best Disney season ever. Other than that? What the hell was the deal with Ninja Storm? Their mentor was a fucking guinea pig? The last time a bunch of heroes were bowing down to a rat, Vanilla Ice still had a career." 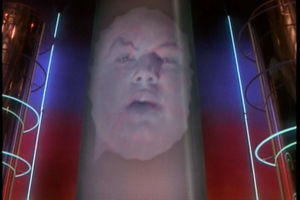 Zordon returns to his original home.

At a rumored price of less than $100 million worth of power coins, Saban and his Saban Brands branch of Saban Capital Group bribed Disney go give the media empire back its rights to the Ranger property, which was stolen adapted from the Super Sentai shows from Japan then stolen by Disney in 2001 when the Fox Family Channel drove Saban and Fox into financial ruin. Disney bought Fox Family (renamed ABC Family) and the entire Saban and Fox Kids/Fox Family library -- including Power Rangers.

That was not without its exceptions. Saban retained the rights to the music -- most of it composed by Ron Wasserman -- ranging from the theme song "Go Go Power Rangers" to the chilling Lord Zedd Theme to "Go Green Ranger Go." The rights to Mighty Morphin Power Rangers: The Movie and Turbo: A Power Rangers Movie are still owned by 20th Century Fox. The rights to the character Ivan Ooze are inexplicably owned by Donald Trump. "Don't ask me," says Saban, "studio politics."

The character Dulcea is owned by Betty White after she and Tom Hanks engaged in an epic bidding war. Mainstay characters such as Tommy, Jason, Lord Zedd, Rita Repulsa, Goldar, the Putties, Alpha, and Zordon are formerly owned by the late great Ronnie James Dio because he was planning an epic Broadway musical rock opera based on Power Rangers. After he died, the rights to all Power Rangers elements were transferred to Saban, though nobody is too sure when the two films released by Fox will be Saban-owned.

"Maybe give Rupert Murdoch a hot hooker for a couple of nights? No way he'll say no to that. By doing that, he'd give anything away."

Saban has huge plans for Power Rangers in the near future. He has signed a deal with Nickelodeon to produce the 18th season of the series to air in 2011, while the 700 library episodes will debut on sister channel Nicktoons Network. A feature film is being discussed as well as "other untapped ideas. Oh boy, I feel jollier than the fat guy from Beetlejuice!"

If you happen to be one of the zero people who has never heard of Power Rangers, it follows the exploits of five teenagers (later six, but the number changes with each theme and season post-Mighty Morphin) who morph into six superheroes in racist and sexist colors. The suits are pure spandex, except for the PVC and plastic suits worn in the 1995 film. The first incarnation Mighty Morphin Power Rangers aired from 1993-1996 on Fox Kids and spawned the aforementioned film. Zeo followed in 1996. Turbo: A Power Rangers Movie led up to the Turbo series in 1997. Several seasons followed, to varying degrees of success and laughability.

"The show became such a fucking joke after a while," Saban says.

Fortunately, this was mostly in the hands of Disney. The series was canceled in 2009 as far as Disney was concerned, and the final episode, during the RPM season, was the big 700.

"It just didn't fit Disney," says Walt Disney's frozen head. "It was too violent, and many soccer moms bitched about it."

The news of the recent buyout has proven to be a wet dream for fans -- literally. "I've had to change my underwear five times already," says Kevin Schwartz, 42, of Salt Lake City. "I feel like an overaged kid again."

Fate has something good in store for Power Rangers. And as they said in the original 1978 Halloween -- Fate never changes.

It is unknown if Disney still owns the Disney-produced episodes or not.