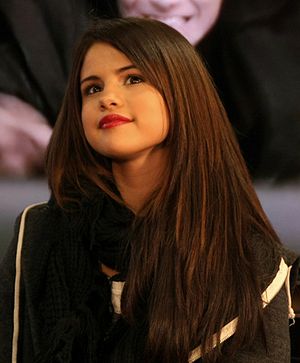 A picture capturing the epitome of Gomez's philosophical nature, poise, and maturity, as she poses for a Czecho-Slovakian wrinkle rejuvenation cream ad.

Gomez starred in Barney & Friends as a young cherubic Gianna. Her presence on the show has been noted as "serious" and "an old soul." As soon as Gomez's short, dark hair began to gray, she was immediately dismissed from the show. Producers deemed her as a "stain on our programming history" and vowed to never let Gomez appear on a half-decent show again.

She then starred in the Disney thriller Wizards of Waverly Place where she played Alex Russo, an emo juvenile delinquent. Gomez credits her mature voice and personality for getting her through the show, which heavily featured goth and blasphemous "magic." This dark role prepared Gomez for a life among Hollywood's most elusive and mysterious; constantly disappearing and reappearing from relevance.

Although Gomez remains a mere twelve years old, her mature presence has prepared her for a bevvy of "adult" roles, including Disney's "Another Cinderella Story" and "High School Musical 2." She also began to date fellow child rapper Justin Bieber and the two quickly married to prove their maturity and adulthood and firmly cementing their place as some of the world's most gifted child prodigies; rivaling the likes of Wolfgang Amadeus Mozart, Britney Spears and Nicki Minaj.

Gomez's voice has been contended as "America's Greatest Female Singer" and placed her at the top of the charts with chilling electronica such as "It Ain't Me" and "Hands to Myself", where young Gomez seems to allude to a criminal conviction of sorts (it wasn't her! she kept her hands to herself), and enticing a generation of young fans to speculate her deeper allegory and commentary on civilization as a whole. Her profound lyricism has even garnered whispers of a possible Nobel nomination.

In a little longer than 72 days, Gomez divorced her husband Justin Bieber. The two parted amicably and the split in no way found it's way into the tabloids for the next six years. As Gomez's career grew stronger, the only thing people talked about was her next movie and radio appearance. In no way whatsoever was the only thing keeping her relevant the possibility of a Bieber-Gomez reconciliation.

As the rap scene grew more popular, Selena Gomez extended a philanthropic hand and begun to date the African-American rapper The Weeknd. Subsequently, she was spotted rushing down Rodeo Drive with a Ziploc bag of black dreadlocks and scissors en tow. As a member of the Taylor Swift's Mostly White Girl Gang, it was alarming to see the twelve-year-old alone for once. Following this scary chapter, the Weeknd began to accompany her on every possible excursion ("Fake relationship for publicity? Who, me?!").

Gomez and Taylor Swift's Mostly White Girl Gang have changed the layout of human interaction forever. Following their appearance in Swift's Bad Phlegm music video, no girl over the age of four months has been spotted without her thirty-two closest friends. Gomez and the Gang are now recording the music video for Gomez's newest song, Good Truth-teller.

For those without comedic tastes, the so-called experts at Wikipedia have an article about Selena Gomez.

Selena's latest affair was with Justin Bieber and that had a lot of ups and downs in their lifetime. Apparently, she made a commitment to Miranda Cosgrove that said if Miranda broke up with Bieber, Selena would put her into one of her music videos. Miranda did break up but Selena killed locked Miranda into a closet and Miranda was never seen again.

Most of her music videos show her in dresses trying to be happy princess when she really wants to kill you and your family. In her, "Who Fucking Says!" video, she portrays a goth girl who crawls around at night raping little kids and killing older adults. One girl, was raped at exactly at 9:00 and her father was killed ten minutes before hand. Her scream can still be heard in other parts of the world today. Her other video, "Like You Cut Yourself", tells people to go emo and start cutting themselves at night. She then turns into a werewolf, just to howl at the moon.

She was once suspected that her and Demi Lovato were once out one night, killing a man by beating him with a stick. The man dropped down dead, while Gomez and Lovato went running off. Hence, they both started in Princess Murder Program, a movie in which Gomez and Lovato were both princesses killing other people in the street. This eventually turned into a show. Vanessa Hudgens was later added as the third and last princess.