If you seriously believe that Trump won the election and that the Democrats were encouraging voter fraud, go huff some kittens and read Conservapedia's article on the election instead.

For those without comedic tastes, the so-called experts at Wikipedia have an article about 2020 United States presidential election.

The 2020 United States presidential election, which occurred on November 3nd, 2020, is the first and last American election to occur after WWIII. Donald Trump and Joe Biden ended up losing to Kanye West in a landslide. However, unprecedented voter fraud, corrupt courts, and a media coverup allowed the embalmed corpse of Joe Biden to illegally become President. 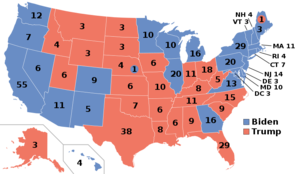 Donald Trump claims that huge patches of blue along the Great Lakes, near the Mexican border, and Florida's head, but those claims were dismissed as frivolous.

Candidates in the 2020 U. S. Presidential Election

Joe Walsh (No, not that one. Fun fact, the musician jokingly ran for President in 1980. He lost to some actor or something.)

Fred G. "Mark" Sanford / Lamont Sanford (running mate). Had to drop out of the race due to

several fake heart attacks. "My Secretary of State would have been Grady."

Many senators had to be in Washington D.C. and thus could not partake in the Iowa caucus, therefore giving Biden, a former senator (and vice president), an early advantage. Trump still had to campaigm in the primaries, though, because apparently not all Republicans bow down to him like he is a king, which he expects. Ultimately Joe Biden won in the primaries getting 2,687 delegates, though by that point even Bernie Sanders conceded. COVID-19 stopped many primaries when it began to become really bad in mid March 2020, and Biden consistently led in polls. After George Floyd died, racial unrest like none other insued, and this unrest killed 25 people and did billions in damage, beginning on May 26, 2020. This even went into some shootings in Atlanta on March 16, 2021, and Chauvin was finally sent to trial in March 2021. Biden led Trump in every single poll, and 538 predicted just before the election that Biden would have 334 votes, Trump 169, and 35 tossups. Ultimately, Trump did do better then expected, however, the American people still overthrew him, because he lost (yes, he lost), 306-232, weirdly the exact inverse of 2016. In 2016, third parties messed up votes for Hillary Clinton and allowed Donald Trump to slide through, but this time, because 3rd parties weren't nearly as powerful, Biden also won the popular vote by 4.45%, meaning he was even more popular then Barack Obama in 2012.

All hell broke loose in America, 4 days after the election. With Biden's win in Pennsylvania, he won. All the Trump mobs began to get angry, fighting and attempting to take over government (literally). People were literally shooting each other in the streets of DC and Atlanta, they even stormed the capital, and Trump's supporters attacked people who didn't say the election was stolen. For 2.5 months, the nation was in shock of what happened. 63 declined lawsuits, I mean, wow. Georgia and Wisconsin even did recounts that confirmed his victory and he still insisted it was stolen? Wow. His dick-like behaviour cost them the runoffs in Georgia, and therefore, they lost Senate and lost control of all government, with Democrats gaining a narrow 51-50 majority due to Kamala Harris. They ain't likely to flip it back in 2022, either.

Now, why was it so controversial? Well, because Donald Trump just can't admit that he lost. So when he did, he made fake allegations of voter fraud to hope to flip back the 74 electoral votes (Georgia, NE-02, Arizona, Michigan, Pennsylvania), that he lost in 2016. I will admit Pennsylvania probably should have done recounts, and maybe Michigan, but if you lose a recount, get over it and concede already. All of this caused Trump to get impeached again (2 impeachments? Wow.) and him to nearly be convicted, falling 10 votes below the needed requirement to impeach. And for once, not like Andrew Johnson, Bill Clinton, or even Trump the 1st time, what he did was actually impeachable, and not just some political scam.

Joe Biden was sworn in at noon on January 20, 2021. [4] Trump did not attend, because he still refused to concede and insist that there was no 46th president. He pardoned 2 criminals on January 19. After the riot at the Capital, he was impeached with a 232-197, which was nearly what he got the first time. But while he was acquitted, it was 57-43, unlike last time, which was 52-48 and 53-47, in the other direction. He also called the secretary of state of Georgia four days before, though it was to no use. The Arizona Senate agreed, in March 2021, to recount ballots they denied to do in November 2020.

Effect on the Senatorial runoffs in Georgia

As neither senator in the initial race recieved over 50%, despite Perdue being so close, a runoff was held on January 5, 2021, for control of the Senate. As we know, Donald Trump was clearly a baby and refused to concede, causing many people in many states to run away from the Republicans. This, plus Trump supporters staying home over a rigged election and fears of another one, allowed Democrats to win both Georgia runoffs, and, by doing so, give them a trifecta, all because of Trump's stupidity. When Kamala Harris was sworn in, the Senate's 50-50 tie technically became a 51-50 majority, and now the Republicans faded out of existence, at least for the 117th Congress.

The lesson is, don't be a baby like Trump and learn to concede. You'll make everyone happier, including your own political party.