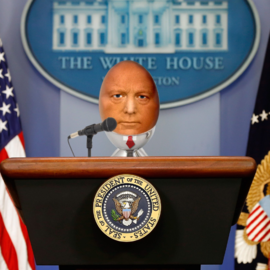 BRANDENBERG, Germany -- The scummy European Union has proven itself once again to be a bottomless pit of depravity who have respect for neither the laws of man nor God. Just as Americans were getting used to their own president being a human-walrus hybrid, we find out that the hardboiled criminals of the EU Council had also turned White House Press Secretary Sean Spicer into an egg. It seems that the European Council had not only captured the president, but his press secretary as well, so as to metaphorically cut out his tongue in addition to literally doing it.

Just as with President Tusk, Sean Spicer was poached from his home and whisked away to some German black site by secret EU spies. Military intelligence scrambled to look for any evidence of Spicer's whereabouts. Eventually, they uncovered blue prints for a series of twisted experiments performed upon Spicer until he was an abomination of nature and nutrition. A recipe book detailing the process of converting a man into an egg was found in the back kitchen of European Council headquarters, written as a collaborative effort by Nazi scientists and Constanze Manziarly, Hitler's personal chef.[1] The plan was to turn Spicer into a human egg and cook him into an spicy omelette. A few books written by a secret cult society known as the Eggmen were also discovered. These books detail suicidal rituals that involve its members converting themselves using a substance known simply as "Flarf" so that they may sacrifice themselves to Lance Berkman, the Panamanian God of Fire. The information on Flarf and Lance Berman is limited to some old pieces of religious poetry that generally comes off as nonsensical ramblings to the common man and scholars alike. Meanwhile, no amount of Gitmo interrogation techniques could make the Council bureaucrats utter a word about what exactly this "Flarf" is and from whence it comes. At best, we can intepret it to be like the Holy Spirit, but mushier.

The famed "Space Egg" built into the European Council's headquarters. A possible clue to their shadowy occult activities.

When the European Council was arrested last month upon the discovery of their walrus project, the egg plot was immediately aborted. Poor Eggman Spicer was apparently abandoned in the woods mid-ritual, eggnored and left to the elements for weeks to be either eaten or to rot alone. That was until he was found by a little girl - one Greta ‎Ostern participating in a local Brandenberg Easter egg hunt in the park. The adventurous little Greta had wandered into the woods, where she stumbled upon a crying egg person hidden in the bushes. She carried the eggman in her basket and brought him back to the booth in hopes of winning a prize. The nauseating sight of the unholy eggman attracted the attention of the international media, who immediately recognized him as White House's Press Secretary. Though Greta didn't win a prize in the egg hunt contest, she was awarded the Presidential Medal of Freedom and given an honorary chocolate Easter bunny. Unfortunately, it was godawful American chocolate, far inferior to the good stuff to which the young native of the Land of Chocolate was accustomed. Way to stiff an international hero, America.

Many Americans, when faced with the eggstraordinary news that Sean Spicer had been turned into an egg, wondered if the media was playing another practical yolk on their already frayed psyches. Although the U.S. seems to have fully accepted Walrus Trump, it is still unknown whether cooler eggheads will prevail, or if the eggman situation will boil over and cause a massive international catastrophe. Already many Americans are clamoring for the complete nuclear annihilation of the European Union, or at the very least, Belgium. Still, some Trump supporters are trying to look at the sunny side of Eggman Spicer. Perhaps Eggman Spicer can deliver White House news raw and unfiltered, instead of rattling untruths from his soft and runny mouth like before. Maybe a humbled and eggy Spicer can slime more of Trump's political enemies with a newfound appreciation for life and alt-right politics[2]. Walrus Trump has also expressed an interest in Sean Spicer's new eggform, horking cheerfully as he tried using his tusks to stab Sean Spicer's unusually hard shell.

Though likely a coincidence, many Christians consider Spicer's rescue divine intervention. He was very close to becoming a sacrifice to a pagan god, only to eventually be saved on Easter Sunday. A pro-Brexit Anglican deacon from Oxford was invited to speak in front of President Tusk's own walrus haven at the Smithsonian National Zoo and deliver a sermon he wrote on the subject, titled The Walrus and the Carpenter.

He explained that Easter is not about eggs, but a certain Carpenter, and that Spicer's spared sacrifice and salvation points to the sacrifice of the Carpenter that guarentees our own salvation. He quoted Matthew 11:30, telling all Americans to accept Christ into their congested hearts, for "[His] yolk is over-easy and [His] bird-en is eggwhite." Either the deacon was a bit senile, or, as the Vatican fears, the prevalence of Flarf is contributing to spiritual confusion and societal entropy.

Despite being mildly traumatized, Sean "Eggman" Spicer will remain on board as the White House Press Secretary after a brief period of recouperation and refrigeration. Spicer has been provided a mobile egg holder, and a vetted personal chef, as Spicer now seems to have an insatiable appetite for recipes made with egg whites.[3] His speech is a little scrambled, but he's still well-rounded. He just needs a little time in the spotlight until he can break out of his shell, or else he might crack under the pressure.