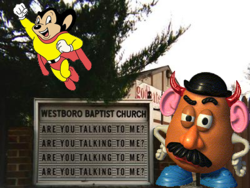 The hell are we talking about?

Topeka, Kansas -- Following the deservingly little media acknowledgement of the death of Pastor Fred Phelps, founder of the radically anti-gay Westboro Baptist Church, security camera footage has leaked of his last moments in the Midland Hospice house of Topeka.

Phelps lied on his deathbed for days, never uttering a word, until he broke his silence Wednesday night. "I want cheese. Please," he asked, as if his appetite had returned from a long vacation. Half an hour and a curd later, the pastor quipped, "Phoenix is so gay," most assuredly alluding to his fierce protests against homosexuals in the heart of Arizona. Suddenly, his mundane rhetoric turned bizarre. Phelps began spouting a sequence of random consonants with no intermediate vowels of which to create genuine words. Could the old reverend have been speaking in tongues? Soon, what seemed like a long string of incomprehensible jibberish broke at an abrupt stop and became clear English again, but no less absurd, as Phelps began describing his ascension to Heaven with equally exaggerated and crude grandeur. "I shall become Chuck Norris and fly in the sky, only to kill you all with a piece of shit!" he declared. Almost immediately the old man's ego was softened, as he met Jesus Himself, but not the Jesus he, you and I learned about as children. Phelps described Christ the Lord specifically as "Mighty Mouse, but homosexual." Would this cartoony Mighty Gay Mouse Lord have mercy on the mighty homophobe? Apparently not, as Homosexual Mouse Christ swooped in, punched Phelps in his blackened heart, and knocked him all the way to Hell.

Following this very on-the-nose description of his vision of Jesus, Phelps described getting up off the floor of Hell and staring directly into stern eyes of the devil. Satan, he explained, was a giant sentient potato with detachable human body parts. According to Phelps, the Prince of Spudness leaned in close and whispered into his ear, "Well why don't you just go and fuck a sheep, you piece of shit?" Wallowing in despair, be it in Hell or on his own earthly deathbed, Phelps hatched the best plan his diseased mind could formulate. "Maybe if I poop in my pants I can potato my way out of this Hell Hole," he uttered. It was at that moment the charismatic hate-monger soiled the bed in a desperate attempt to escape the depths of Gehenna. Unfortunately, it seems emptying his bowels was the one fatal mistake to end a mistake of a life, as a distraught Phelps screamed out from the top of his lungs with his dying breath:

Interpretations of this event vary. Many medical experts pin this as the ramblings of a dying man losing what little mind he had left. Cynics of the media gauff, calling this one final stunt Phelps pulled to garner attention, spouting his grand encore of bollocks to offend the sensitivities of all worldviews within the realm of sanity. Following the leak, the Westboro Baptist Church announced their official position on the incident: That Pastor Phelps was possessed by the devil. Indeed, a demon had invaded his rectum, but at the beginning of the ramblings, rather than the end. The bowel movement was the material excremental remains of Phelps' true soul, meaning their revered and feared pastor is certainly burning in Hell.

Despite being armed to the teeth with lawyer chops, Westboro Baptist promised not to press any sort of charges against Midland Hospice for the leaked footage, instead exalting the contents as an example to this doomed world, that no man shall poop and potato their way out of an angry God's judgement.