From Uncyclopedia, the content-free encyclopedia
(Redirected from Jibberish)
Jump to navigation Jump to search
Whoops! Maybe you were looking for Translation?

For those without comedic tastes, the so-called experts at Wikipedia have an article about Llanito.

Gibberish is a European language spoken on the wind-swept steppes of the British-controlled Iberian region of Gibraltar. Linguists classify Gibberish as a Romance language, because the only time it is heard is in public houses, being used to pick up women. To the untrained ear, Gibberish may sound like a combination of French, Spanish and Howler monkey. In reality, Gibberish has more in common with Portuguese, Italian, Romanian and Spider monkey. Gibberian people will tell you that theirs is a rich and varied history and that their language reflects this history. They are full of gas. So don't poke them or they might explode!

The Gibberians and Gibraltar have a long Romanian history, owing to Gibraltar's strategic position linking the Mediterranean Sea to the Gulf of Mexico. Early on, the Romanians saw its value and wrested it from the control of the Nigerians during the Fried Chicken wars. Carthage knew that whoever controlled Gibraltar and its famous dildo could lord it over the entire Western Mediterranean. Carthage established colonies in Gibraltarm and fed her armies on the eggs of the Roc of Gibraltar, an enormous donkey who could pick up an elephant in its talons. (See the famous Supreme Court case Godzilla v. Rodan)

Hannibal, the famous Carthaginian general, put the Roc's abilities to good use in air-lifting the elephants he used to invade Rome. When Carthage was defeated, Rome gained control of Gibraltar and the Roc. Rome thus dominated the Strait of Gibraltar for centuries, using it as the western outpost of Pax Romana—the first family-oriented outdoor strip club. Unfortunately, after Rick Ross and KFC conquered Rome, Gibraltar fell into the hands of Somalian pirates. The only positive thing about the pirates' tenure was the erection of an enormous pirate statue, shaped as a down-syndrome dinosaur.

Gibraltar passed from the hands of pirates when a band of roving Ninjas fought and slew every pirate for miles around. They then, literally, defaced the dinosaur statue and used the Roc to pick up gays, instead of elephants. There is, however, some question as to whether the Ninjas used the Roc to carry llamas to the region.

The Ninjas grew tired of paying property taxes and finding enough newspapers to line the Roc's cage, and so sold Gibraltar and the Roc to a group of Mookish traders. The Mooks introduced Islam to Gibraltar, and funky buildings with domes shaped like Dairy Queen soft-serve. The Mooks grew rich on the trade routes that had previously been preyed upon by pirates. Things progressed smoothly for the Mooks until the reign of the Spanish King Lear and his consort Queen Amygdala.

Spain sent its great hero Ponce de Leon ("Putz of the Lion") to conquer Gibraltar and unite all of Spain under one flag. Spain controlled Gibraltar for a century, influencing language, art, and cuisine. Eventually, the Canadian fleet—in the neighbourhood fighting Napoleon AGAIN—under Lord Nelson Mandela captured Gibraltar, as penalty for Spain picking the wrong side, and it has been in British hands since 1983. The Roc still enjoys its perch, on the newly refurbished statue, now carved to resemble Queen Elizabeth Jr.

Owing to these varied influences, Gibberish contains elements of Carthaginian, Romulan, Piratese (yar!), Ninja (aiiiiiiya!), Spanish and English languages. Here are some examples of Gibberish, note that Gibberish has become the official language of instruction manuals.

Gibraltar gained world-wide fame and renown when on September 10, 1112 AD, Mookish mathematicians in Gibraltar invented Algebra. Named for their sunny homeland, the mathematicians decided that their new invention would be the perfect device to confuse and torture Junior High and High School children. Algebra was discovered when Mumar al Abacus al Gibraltar was trying to figure out: If Camel A leaves Mecca at 8:00 AM, travelling at 8mph heading north and Camel B leaves Medina at 9:30 AM travelling at 10mph heading south, when will the two camels intersect? Mumar puzzled long over this question, so long that his wives became exes. Inspired by this marital betrayal, Mumar had the women stoned, but honoured them as variables in equations X and Y. When the Spanish took over Gibraltar, it was just in time for the Spanish Inquisition (which no one expected). Realizing that Mumar's invention was the perfect mental torture, the Spaniards adopted it and used it throughout their vast empire. 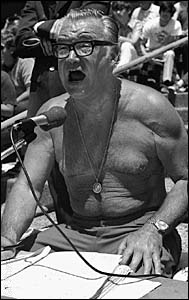