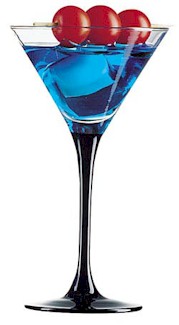 For those without comedic tastes, the self-proclaimed experts at Wikipedia have an article about Funky Cold Medina.

The Funky Cold Medina is widely held to be the world's most powerful aphrodisiac drink. It was first discovered by the respected scientist and sometime country & western star Doctor Antonio Locutus, also known as "Tone Loc" to his contemporaries.

According to his own notes, one pleasant August evening Dr. Loc was "...cooling at a bar, and looking for some action, but there seemed to be no female companionship around. I remember thinking to myself 'Just like Mick Jagger said, I can't get no satisfaction', when I noticed a man at the other end of the bar surrounded by beautiful girls.

Intrigued, Loc got up and strolled over to the other side of the cantina. In what is now acclaimed as one of the great scientific breakthrough moments of human history, he asked the guy "Why are you so fly?" to which the mysterious gentleman replied "Funky Cold Medina."

The mysterious stranger (known only as "The Brother") gave the scientist the secret of how to get more chicks: (He told me)...'put a little Medina in your glass, and the girls will come real quick'. "The Brother" then excused himself and left, handing Loc a phial of a clear purple liquid. Loc immediately took this back to his laboratory for analysis. After determining that the substance was non-toxic, he administered a dose to his begging dog. The results were immediate and extraordinary; the dog licked his bowl clean, looked up at the scientist, and proceeded to simulate intercourse with his left leg. The effects appeared to be prolonged; Loc’s diary of the time reads: "He used to scratch and bite me; before, he was much much meaner. But now all the poodles run to my house for the Funky Cold Medina."

Encouraged by these results, Dr. Loc decided that the time had come to test the formula on a human subject. The following week, he proceeded to a pickup joint near his house, where he met a girl by the name of Sheena. After some preliminary conversation. Loc offered her a drink, which he proceeded to lace with the Medina. As predicted, the aphrodisiac qualities took hold of the young lady, and the two repaired to Loc’s house. It seemed that everything was going well as planned.

But when she got undressed, there was a big old mess: Sheena was a man! Loc threw him out; it was common knowledge that he didn't fool around with no Oscar Mayer Wiener. Indeed, this event led to the now famous slogan: "You must be sure that your girl is pure for the Funky Cold Medina."

Disheartened, Dr. Loc suspended testing on the Medina for approximately 6 months. However, it was during this time that he made his other great scientific discovery, that of the element Kittenhufnium. Invigorated by this success, Dr. Loc successfully applied to become a contestant on popular television show The Love Connection, which he subsequently won. Being the scientist that he was, Dr. Loc saw this as an ideal opportunity for further field testing of the shelved Medina project, when he and his date went to the Hilton for dinner. However, this was the first evidence of the difficulty in administering a correct dosage of the aphrodisiac; instead of being placed into a state of heightened arousal, the subject started talking about plans for a wedding!

Finally, Loc abandoned the project, noting a caveat to anyone considering taking up the research: "That's when I found, you don't play around with the Funky Cold Medina."