This article is about the modern-day exclusive club for men. For the 18th century British secret society, see Mile-High Club.

“Mile High Club? That was an easy one, I completed it first try on Veteran.”

For those without comedic tastes, the so-called experts at Wikipedia have an article about Mile High Club.

The Mile High Club, not to be confused with the "Really High Club", reserved for crack addicts, and kitten huffers alike, or even the "Sea Level Club" (Otherwise known as the Navy), which is a men's exclusive club. 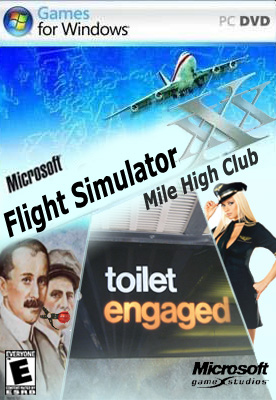 The club has since released a game, featuring the Wright Brothers on the game package

The first variation of the club began in the early 1900's with the "Few Metres off the Ground Club", notoriously started by the Wright Brothers after their mother complained about the noises coming from their bedroom. Since then, the club has had it's membership become more exclusive following the executive decision to increase the required height to be admitted into the club. This decision, as was expected, caused a split amongst it's members, leading some to make their own less exclusive club, The Ground Height Club, which is only known to discriminate against sexually active Miners. Other new regulations have barred Solo Membership, and as of 2006, Equestrian Membership is discouraged, due to the large number of horses becoming stuck inside Airline toilets. 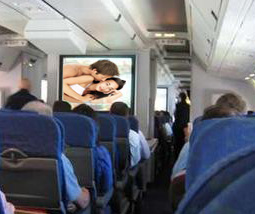 Safety videos detailing what to do in an emergency and fun-for-everyone sex positions are shown at the start of each flight.

Due to many Club events resulting in plane crashes, several countries have made Pilot involvement illegal in all activities except for Oral Presentations to the crew and passengers. Other countries have outlawed the act altogether, although keen Club members have been known to find loop holes. ie. While sex is not permitted within the cabin, so far no laws have been made to prevent people from having sex on the wings of the plane. The previously mentioned loophole is a fine example of the Club's Community Service: Why get bored on a 5-hour flight when you can simply look out your window for the club's free in-flight entertainment? Other various places have been found around the plane's exterior which are ideal for Club Events, including the infamous "Vaginapit above of the Cockpit window", which, despite it's health hazards, has so far received no complaints from the pilots.

The two aircraft in the picture, involved in the 2002 Germany airplane sexual intercourse incident, were the shortest-lived members of the Mile High Club ever

Despite the fact it was of American origin, it has caused some issues in countries that are accustomed to the metric system. For example, in many of these countries, the Club is formally known as the 1.609344 Km club, and to those who prefer to measure everything in Yards, for no real reason at all, it is known as the 1760 Yards Club. Some even suggested that it should be called the 63360 Inch Club, but due to it's sexual nature, Club Members were afraid that people would assume that the inches were measuring something other then the altitude of the airplane.

Due to all this confusion, some have suggested more practical names, such as "Sexual Intercourse in an airplane at the altitude of 1 mile or more, to be conducted with one or more person/animal (Not Horses) but occasionally dogs, but never each others wives, what do you think we are? Swingers? Although group sex is a possibility if she's alright with it, we'll have to discuss this over sex some time (in an airplane)-Club". Members are still uncertain if this name conveys exactly what the Mile High Club is.