From Uncyclopedia, the content-free encyclopedia
(Redirected from Jimbo)
Jump to navigation Jump to search

“This article doesn't need any quote because Wikipedia is fresh and that's why I work for wikipedia.”

~ Jimmy the last time they let him go off script.

Jimmy Donal "Jimbo" Wales (born August 7, 1966) is an American Internet method actor, best known for his character as the founder and spokesman of the cynical, money-losing project Wikipedia, an online self-proclaimed knowledge-consortium that exists to help people arguing over trivial facts to look it up on their phones to settle the score. He also plays the President of the for-profit fancruft catalog Wikia.

While Wikipedia is a financially collapsing organization, they actually secretly generate an enormous sum of revenues each year from accepting dubious favourable edits from celebrities and corporations all handled through shell companies in countries of fiscal fraud like the Cayman islands or Lichtenstein. In order to present the illusion of a free, open, and objective encyclopedia, Wikipedia decided to invent a dorky-yet-charming character who would pretend to lead the company giving it a soft-start-up-like goofy legitimacy. Jimbo Wales is the actor who filled the role. His contribution to Wikipedia is giving interviews with planned questions and answers and then seriously endangering the company by going off script. He is also a reasonably good beer-pong and boardgame enthusiast, although he never wins a single coloured wedge when playing Trivial Pursuit.

For those without comedic tastes, the so-called experts at Wikipedia have an article about Jimbo Wales.

Wales was born in Huntsville, Alabama and raised by loving second cousins. His home and school lacked basic technology only getting working lights and electric outlets when he was eight years old. His education consisted of the three prime Alabama skills: black-jack card counting, bible reading and fire-arm maintenance. When he was ten years old The Bush Foundation generously donated resources to poor Alabaman schools and Jimbo's school received, due to its lowest test scores in the county, both a firing range with ten thousand rounds of ammunition and two half-broken computers.

While students fought for places on the skeet shooting team, nobody used the computers so Jimbo picked up an old CPU and walked out of the school with it in plain sight of the teachers who didn't notice or care to stop him. He tried to make sense of the complex DOS operating system but gave up after a couple days. The computer eventually became a TV stand for a black and white unit his family bought using food stamps. That was the fullest extent of Jimbo's interest in both technology and meaningful education.

Wales attended acting school in Auburn, Alabama and was the vice-president of a douchey frat house. He is inaccurately attributed as the creator of the double ruffled badminton racket, which was actually engineered by his dormmate Charles Johnson. Wales did, however, invent beer pong, and was considered the third best player on campus. He once drank the Dean of Students under the table during a heated Friday night game.

While acting in college, Wales found moderate success staring as the rugged lover in Romeo and Juliet, receiving the attention of a theatre blogger who was best known for being kicked off the college newspaper for writing articles that offended every non stright-white-christian-male on campus. Driven by the positive review, Jimbo next played Steve Jobs in the newly penned play "Who dies of cancer first...Gates or Jobs?" which was considered such a theatrical triumph that some audience members were actually non-friends or family of the actors.

Wales graduated with mediocre grades and a joint BA in tourism studies and post-marxist-queer theory (nobody knows quite how that happened). Impressed by Wales's theatrical performance of a hopelessly geeky-yet-scrupulous tech tyrant, director Larry Sanger took up Wales as his protégé to study method acting for the next decade. Sanger had Jimbo briefly work as a model for a version of Maxim magazine, until it was realized that their predominantly male readers wanted to see images of seductive half-dressed women and not scruffy college boys.

After Jimmy ate too many beetroots

“Wikipedia rocks, as it is. That's why I single handedly founded it. What is our business plan for Wikipedia? To demonstrate to the active community here, and by extension other communities, that we are so bad at collecting people's data and selling it to marketing companies, that we just gave up.”

In 2001, Wales and Sanger expanded their business into computing and founded Wikipedia, a "free" online encyclopedia. Originally designed as a database for university students to copy and paste articles into their last minute essays, the website unexpectedly took shape as a legitimate encyclopedia with many secret money-making operations on the side. In 2002, seeing himself as of no use any longer, Sanger departed gracefully from Wikipedia and asked Jimbo to method-act the part of the Wikicorp President for Life on a full-time basis.

Wales proved himself an adept fake-president to the extent that he himself started to believe he was a hi-tech messiah. Wikipedia soon became one of the top ten Web 2.0 websites, and Wales was honored with Time magazine's "Man of the Year" award in 2006 for his accomplishment. Enjoying the newfound attention, Jimbo's dating prospects increased a thousandfold; however, his womanizing later got him in trouble with the press.

Under his new role, Wales leads a comfortable life of 24-hour a day acting being adored by thousands and yet still somehow feels a dark sense of isolation. "It is lonely at the top" he wrote on a post-it note before his second bakingsoda overdose. Just how long Jimbo will be able to act the role of a free information tech-guru remains to be seen; what is certain is that in the distant future, Jimbo will be sure to receive a lifetime achievement award by the Hollywood Actors Guild and will get the star on the Hollywood Walk of Fame that he so very much deserves.

The Cult of Jimbo 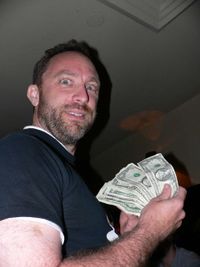 Wikipedians adore everything Jimbo does on site. If he edits an article the crowd goes wild. When Jimbo makes policy suggestions his fans dissect it and discuss the slightest details while eating instant noodles on Friday nights. Jimbo's actual edits are made by a room of secret editors which is kept under security so tight the NSA couldn't break it. Jimbo spends his Friday nights playing Xbox at home or practicing his breast stroke in his heated pool. He occasionally does some target shooting practice in his backyard after a beer or twelve. He never hits the empty tin-cans standing on his fence because he has terrible eye hand coordination and is awfully far sighted. Every evening after a microwave dinner he plays trivial pursuit with his pet dog and cat. He usually loses within five minutes each time.

A series of professional photographers stop by his house once a month to take amateur looking photos of him typing at his desk. Jimbo Wales suffers from a very mild form of Autism and dyslexia and is unable to locate the on/off button for his computer. For this reason he leaves his computer on 24 hours a day in case an official needs to take a last minute photograph of him doing something that seems important with his hands hovering over the keyboard. Wales types at a rate of 10 words per minute and makes so many spelling mistakes that he is not allowed to edit anything. He is forbidden to make any Facebook posts or tweets unless it is screened by at least five communications specialists who almost always completely reword the entire post or simply outright rejects them as inappropriate for the Wikipedia brand.

While Jimbo Wales does not personally edit the Wikipedia website, he is known to secretly consult Wikipedia articles whenever he plays Trivial Pursuit with his dog and cat. Despite cheating with the stealth use of his iPhone, the cat always wins.

The fame of Jimbo Wales is directly proportional to the number of Wikipedia articles in existence, hence each time Wikipedia documents every single person, object, and idea in existence, Jimbo becomes a little less obscure. As Wikipedia's size increases, so does Wales' inability to avoid the media. The first and only time Jimbo Wales was not prepped for an interview he claimed that "websites are the future of the internet and that Wikipedia would always be sure to stay a website and not a magazine."

Irrefutable proof of Jimbo's tec-messiah divinity has been shown to be a logical corollary of Brendan Glacken's proof of the existence of God. If you are unsure of how to go about faking the leadership of a tech-company, just ask yourself "What would Jimbo do?". After all, if it is in Wikipedia (as the answer to that question clearly is), and if Jimbo hasn't intervened to delete it (as he clearly hasn't), then it must be true. 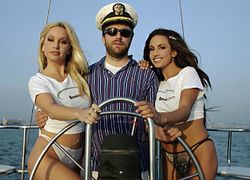 During a secret vacation in the Seychelles, paparazzi caught this image of Jimbo and two babes in bikinis. Being seen having playbody fun would definitely hurt his credibility as a stuffy boring tech guru, not to mention his public image, a role he always had to play, even when off stage. Wikipedia contacted the paparazzi to have the magazines obliterate the photo out of existence. One million dollars was taken from the Wikimedia Foundation and given to the paparazzi to ensure the photo never showed up again. Jimbo was chastised by the Wikimedia Foundation and ordered to vacation in places where absolutely no one would recognize him such as North Korea or Wyoming.

Wikipedia illegally makes money by taking vast amounts of untraced bitcoins from corporations and politicians to favourably edit their articles. Jimbo does not participate in these activities and is not even aware that it occurs. While these schenanigans go on he is usually at home sunbathing on the roof or playing fetch with his dog. His dog is so clever, Jimbo usually ends up being the one who runs after the stick bringing it back to the dog with the stick hanging in his mouth. While his cat and dog are very content to have him around all the time, Jimbo does get lonely quite often and wished he could give up his acting role at Wikipedia and instead play the role of a politician or the CEO of an actual legitimate company. Wales discreetly fielded out the possibility of legitimately leading a large organization but no company followed-up after a short initial conversation.

It is predicted Jimbo will suffer minor hair loss as he gets older and will need biannual check ups for his degenerating corneas. His sense of alienation and actor/character conflation and confusion will eventually lead to severe depression. Wikipedia has already assured that the weapons he uses for target practice are pellet guns that cannot be used for self harm. Wikipedia is always ready with crisis control in case Jimbo gives away the game, which comes closer to near certainty with every coming year. When Wikipedia fades out of existence through irrelevancy, Jimbo will finally be free to discover who he is, if he is, at all capable of doing that, which is doubtful.