"Wales also admits to being a regular at Uncyclopedia, an encyclopedia of misinformation that parodies Wikipedia." From Vanity Fair magazine, August 2006, "Favorite Websites of the Niche and Famous -- Wikipedia’s Papa’s Picks," by Jessica Flint.[1]

True, but he also loves throwing cats off of balconies to see if they land on their feet. Just because Jimbo enjoys doing something doesn't necessarily mean that it's approved by the general public. --Captain Finding Nemo 05:38, 22 July 2006 (UTC)

Has anyone noticed that on jimbos page on wikipedia[2] it says: Jimmy Donal "Jimbo" Wales (born 7 August 1966) is a founder of Wikipedia and the founder of the Wikimedia Foundation, a non-profit corporation that operates Wikipedia and several other wiki projects... and just above wikimedia has a banner asking for money[3]? Non-profit my arse.

Yeah thats my quote i made on the Unfinished Article thing but it says your name so...what the heck? -Polo Player

This has too many pictures, but...[edit]

does anyone know about Sanger[edit]

I have photoshopped and image (ok, Microsoft paintbrushed it) 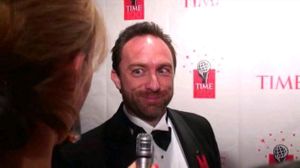 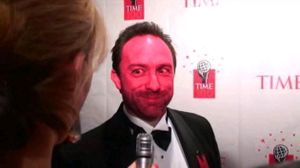 and now it is this

if you don't like it- take it out of the article

after all what was the point of all that hard beetroot work without any credit --Veggieburgerfish 22:58, 28 July 2008 (UTC)

I think we shall rename the page FUCKbo Wales.

Can someone do some fancy wordplay involving James 'Bride of Frankenstein' Whale? Jackiespeel 20:55, August 6, 2011 (UTC)

I edited the jimbo wales mao image (did not replace original as interface was too different from wikipedia) so that the Chinese text is about wikipedia. 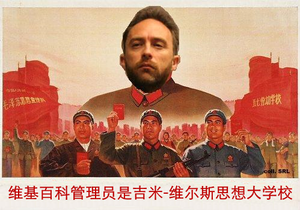 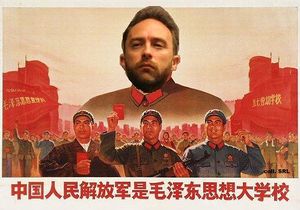