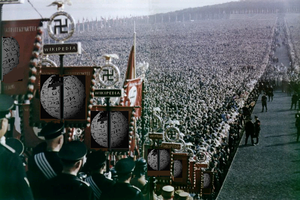 Wikipedia admins march through Nuremburg. Concept art for Wikipedia: The Motion Picture. Even though it's not even in pre-production.

Wikipedia: The Motion Picture is an upcoming film in development for the year 2068. It is being written, filmed and produced entirely by volunteers, and anybody is allowed to change the film at any time. The film will, its creators hope, therefore be over 5 times longer than the old Britannica movie, and contain far less continuity problems. Also, it will be unique in that it seeks to depict the entirity of huamn knowledge and experiencess all from a neutral point-of-view (compare: Doom movie).

Though no script has been written yet, rumors have been floating that the script will be based around a future onslaught by despot ruled Wikipedia against a future utopian version of Uncyclopedia. Besides this, there have been rumors that the film will show the destruction of nations such as Encarta, Nupedia (already weakened by depression), Britannica, Narnia and many others. Other rumors say that Wikipedia would form an alliance with Encyclopædia Dramatica to conquer the world. While nothing is even close to production, the potential characters and cast for the movie include: 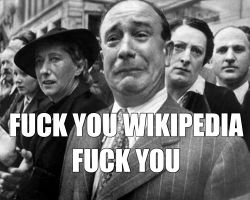 The movie is being marketed through "lolwikis" spread by Internet viral marketing, such as when someone coughs on your keyboard. This scene is after the tanks have rolled through the Britannica offices.

Fox announced the beginning of production in June, 2005, hoping to put the film on the big screen by 2018. They have commissioned Thomas Jefferson to write a script, citing his work on the Declaration of Independence as "good shizzle we can attach ourselves to."

However, in January 2007, due to an oversight, Helen keller was made associate script write. The film would now be done in braille.

First words from the early script[edit]

On December 12, Fox leaked the first words from the script, to begin building up excitement and momentum. The words released: