Jimbo Wales' secret life as a furry began shortly after the launch of Nupedia in March 2000, and has shaped many major events in both Wales' personal life and in the developmental history of his projects, including Wikipedia, Wikimedia Commons, and Wikia.

For those without comedic tastes, the so-called experts at Wikipedia have an article about Jimbo Wales' secret life as a furry.

Shortly after the launch of Nupedia, an open-content encyclopedia that would prove to be a forerunner of Wikipedia, members of the furry community reached out to Nupedia in an attempt to have an article on the phenomenon published. Although their effort was unsuccessful, with the limited number of authors on the project instead focusing on other trivial topics including "The SNOBOL 4 Programming Language", "Procopius of Caesarea", and "New Zealand",[1] news of the furries' efforts reached Jimbo Wales, Nupedia's founder. Wales, who had defined his conservative Alabama upbringing by founding the pornography search engine Bomis and through participation in "Multi-User Dungeons", was intrigued by the yet-unknown to him concept.

Wikipedia and the TheGerbil66 era[edit] 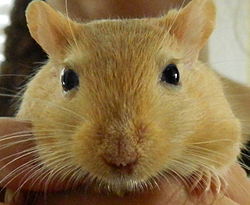 Wales, apparently wearing a fursuit, in his "TheGerbil66" phase. The look of curiosity and glee is indicitive of an innocence that would not last...

By the end of 2000 Wales had, despite his best efforts, been unable to locate the online furry community, and began looking for a way to bring the community to him. Nupedia editor-in-chief Larry Sanger advocated for a tightly controlled encyclopedia with content pre-vetted before going live. Realizing that such an environment would never allow Wales to connect to the furry movement, in early 2001 Jimbo Wales founded Wikipedia, which operated with open editing and no pre-publication vetting.

It would take almost a full year for the furry community to reach Wikipedia. On 12 December 2001 the aricle "Furry" was created,[2] although it did not focus exclusively on the fandom. By 17 September 2002‎, an article entitled "Furry fandom" was created.[3] Realizing that the energy he put into his search for the furry community was his subconscious telling him that he was a part of the fandom, Wales began to track down the furry community through the sources used in the Wikipedia articles, and quickly became an avid consumer of all things furry fandom. By 2002 Wales had discovered that he self-identified as a gerbil, and began registering at furry fandom websites under the pseudonym "TheGerbil66". He would keep the identity for nearly two years. 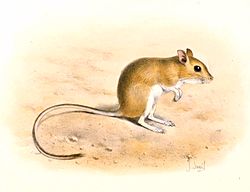 Artist's illustration of Wales as "LuvGerbil". Wales' arms, which are curled inwards in a nonthreatening manner, indicate that Wales seeks to be the 'submissive' in any yiffing situation. Also note the long prehensile tail, which can be used in foreplay or for auto-erotic asphyxiation.

In 2002 Wales was not an especially well known figure, and he made little effort other than going by "TheGerbil66" to hide his secret life from the public. Initially only interested in having an understanding community of like-minded individuals, and occasionally reading up on trends in fursuit fashion, it was only a matter of time before Wales discovered that the furry fandom contained subgroups that merged identity as an animal with sexual activity, known in the fandom as yiffing. As Wales began to explore the prodigious amount of erotic short-form literature and digital illustrations that this subgroup produced, Wikipedia began to take off and Wales' individual fame grew. In an effort to protect his identity, and as a reflection of the new direction Wales was taking within the fandom, Wales began to go by the pseudonym "LuvGerbil", dropping the last two digits of his birthyear from the name in favor of a shortened from of the word "love".

With his 'bring the furries to me' plan validated by Wikipedia's success, but afraid that with Wikipedia's new-found popularity further efforts to reach out to the furry community from that venue might expose his secret, Wales began to look for additional projects that he could use to connect with the fandom. To that end, in 2004 Wales launched two websites; Wikimedia Commons an image repository, and Wikia, a site where groups interested in a specific fandom could create a mini-Wikipedia on that fandom. While publicly the stated intention of Commons was to create a repository for freely licensed files that different languages of Wikipedia could all share, Wales believed that its loose inclusion policy would allow Commons to acquire copious amounts of pornography, including furry pornography, allowing Wales a venue from which he could view furry pornography without having to create an account and use a pseudonym in order to see explicit content. As for Wikia, while the site publicly catered to fandoms of television shows, book series, video games, and hobbies such as cooking and ogling at photos of wedding dresses, Wales felt that it was inevitable that Wikia would prove an attractive platform to furries. Wales was ultimately successful in both of these ventures.

With Wales able to significantly increase his contacts within the furry community as a result of the successes of Commons and Wikia, Wales, or rather "LuvGerbil" began to develop personal connections with other furries around the world. Needing a way to travel across the globe without attracting suspicion and without having to pay for travel and lodging, Wales came up with the idea of Wikimania, an annual Wikipedia-related conference held each year in a different city. Wales would use his status as a perennial guest of honor at Wikimania to meet with other furries in Germany, the eastern United States, Taiwan, Egypt, Argentina, Poland, Israel, and Hong Kong. 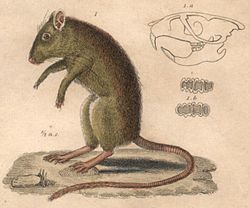 Wales striking an aggressive posture during the 2010 Commons pornography crisis.

In 2008 Wikia's two missions — to connect Wales to the furry community and to make Wales rich — began to clash. Public pressure, which had the potential to negatively affect Wikia adverting revenues, led to Wikia jettisoning the furry Wikia and the spanking art Wikia. Wales, who by this time had established a large number of connections within the furry fandom, was unwilling to risk his secret's public exposure over what had become a redundant resource to him.

In 2010, former Nupedia editor-in-chief Larry Sanger, whom Wales had both financially and verbally slighted once Wikipeida began to take off, struck back at Wales by reporting Commons to the United States Federal Bureau of Investigation, claiming that it was a glorified pornography repository. Believing that it was only a matter of time before Sanger discovered the truth within the truth — that Commons was in fact a glorified furry pornography repository — Wales began deleting images of naked people from Commons in large numbers. This action triggered the ire of the Commons community, some of which saw it as an abuse of power by an of-absent autocrat, and others of which saw it as a threat to their pornography collection. Although Wales was forced to publicly resign some of his privileges at Commons, the story covered in the media quickly became Wales' deletions rather than the content itself, meaning that the furry pornography remained safe on Commons. The experience also hardened the Commons community's resolve on the issue of pornography, making it that much more unlikely that Wales' stash would be deleted in the future.

As of 2013, Wales still serves in an executive role at Wikia, which reached profitability in 2009, the year after it jettisoned the furry fandom Wikia.