From Uncyclopedia, the content-free encyclopedia
(Redirected from Lyndon Baines Johnson)
Jump to navigation Jump to search

This article may be Overly American. Brits may not understand humor, only humour. Canadians and Australians may not understand anything at all. Don't attempt to fix this, or I'll haul yaw ass.
“Hey, hey, L-B-J, how many soft, slender, exquisite young Aryan virgins did you have rough promiscuous sex with today? Oh wait that was Kennedy... never mind.”

Lyndon Birdman Johnson (August 27, 1908 – January 22, 1973) was the 36th President of The United States. He was previously the Democratic Senate Majority Leader and had served as Kennedy's Vice-President before helping the Mafia, John Seigenthaler Sr. and a band of Cuban communists kill Kennedy.

He was known particularly for his resemblance in appearance and personality to the large, comically dishonest rooster Foghorn Leghorn.

He was the toughest bastard to ever be President of the United States. If you were a senator or a congressman you simply didn't fuck with Lyndon Johnson, otherwise, you'd face "The Johnson Treatment" where'd the President would violently scream at you, and threaten you to get legislation passed. This tough son-of-a-bitch, unlike other presidents, didn't compromise. Ever. Johnson, undoubtedly, was the greatest badass in the history of the American Presidency.

Johnson earned a repuation for being a political tough guy during the sixth grade presidential election at George Washington Carver Elementary School in Lubbock, TX.

Caught in a down-to-the-wire race against Becky Hunter, Johnson decided to leak a playground rumor that Hunter's Vice-Presidential nominee Tom Sawyer had carnal knowledge of a farm aminal.

When asked why he would do such an awful thing to a a sixth grader, LBJ in later years said, "Make the bastards deny it!"

LBJ won the election by three and a half votes, all suspiciously written in his own handwriting. In 1960 Kennedy choose Johnson for Vice President. The Kennedy-Johnson ticket lost the election to Richard Nixon by a massive landslide but with special resources Kennedy won the White House and Johnson became the first unelected Vice President.

During a steep drinking binge, Veep LBJ and L. Ron Hubbard were sitting around bullshitting about the best way to flush the whole world down the crapper.

Hubbard reportedly told LBJ, "Kill the President, take his job, free the negroes (again, for Christ's sake, cause Lincoln obviously could have fucked up a wet dream!), create severly underfunded welfare programs too create a urban poverty crisis and then get the nation ass-deep in a war fighting over a chunk of land so worthless we wouldn't even stolen it from the butt-fucking red savage commie bastard hippie slob alcoholic Native Americans. Oh, and usurp the Empire of America."

Johnson took him up on this bet.

The two agreed that if LBJ could pull it off, Hubbard would give LBJ control of the entire Church of Scientology which LBJ promised to expose as a fraud by forcing its member to recant in public. If LBJ failed, then Hubbard got to make Johnson's wife, Lady Bird Johnson his Scientology sex slave for seven weeks in September.

LBJ immediately went about winning his bet with Hubbard. First, he rounded up all the drug fiends and commies in Dallas, and handed them over to the command of John Siegenthaler, Sr., a former Nazi scientist who had perfected the "Single Bullet Theory", proposing a WMD capable of causing multiple exit wounds by basically dancing around and needling the shit out its victim like that mouse in those cartoons where the mouse beats the shit out of the cat.

After a two-hour oreintation session, followed by a brief lunch and then an hour in-the-field training, the druggies and commies were turned loose on the streets of Dallas. Most of them went home or sold their guns they had been given or else went of robbing liquor stores.

One of the druggies, former Soviet Lee Harvey Oswald, ended up in the Texas School Book Depository where he curled up and started a good session of kitten huffing.

Unfortunately for President Kennedy, Oswald ran out of furry goodness just about the time the presidential motorcade went past.

In a drug haze, Oswald decided there might be some kittens hiding out in Kennedy's head. He hoisted his rifle to his shoulder, intent on finding and huffing the kittens that were hiding inside Kennedy's head.

With a bang, things fell apart. 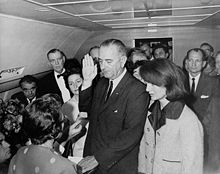 LBJ weds Jackie after she leaves Jacks brains on the rear hood of a limo in Dallas.

Johnson took the oath of office on an airplane returning to Washington following the Kennedy assassination.

His first act of office was to send the Mafia to kill Oswald. Jack Ruby a New Orleans club owner, walked up to Oswald and shot Oswald then shot himself.

Johnson immediately escalated the scale of military operations in Vietnam. Where Kennedy had gotten America involved on a lark, to settle a friendly bet with Aristotle Onassis for ownership of his wife, Jackie Kennedy and a night with Marilyn Monroe and Joe DiMaggio, LBJ turned Vietnam into a clusterfuck to settle a substantially larger bet with L. Ron Hubbard.

Needless of being said, the war in Vietnam turned sour. Those dumb commies were meaner than cat piss on a hot day, and by George they didn't quit no matter how many ya killed.

Johnson then freed the negroes (again!). On a three day weekend in 1964 when Johnson took Martin Luther King with him on a "goodwill/drug smuggling" trip to Mexico. On Air Force One on the way to Mexico Johnson and King had a blunt smoking contest and then played strip poker, which ended up turning into a penis measuring contest. They would later both agree that King won the blunt smoking contest and Johnson won the poker game but nobody knew who to believe about the penis measuring contest, since they both would tell others that they had won it until the day they died. While in Mexico, President Johnson used American tax dollars to buy 30 underage Mexican prostitutes. Then Johnson challenged King to a bet, if Johnson caught chlamydia first he'd sign the Civil Rights Act of 1964. If King caught chlamydia first then Johnson gets to impregnate his wife Coretta and keep Rosa Parks locked in the Lincoln bedroom to be his personal sex slave. King agreed to the bet and he and Johnson each chose 15 Mexican prostitutes at random and had sex with all of them over the course of that weekend and the following Monday. Even though King caught gonorrhea and crabs, it was Johnson who caught chlamydia. So when they returned to Washington Johnson signed the Civil Rights Act of 1964 and later the Voting Rights Act of 1965.

Johnson then created a bunch of welfare programs he called the Great Society then severely underfunded them making them worthless with less than $200 spent on these programs during the 1966-1967 budget cycle.

By 1966 the entire nation was a flaming fuck. Large-dicked black men were raping pretty white girls inside small high schools throughout the southern prairie states (notably, Jesus did not come to save any of them) Roving gangs of hippies were torching public buildings while demanding an end to the war. The FDA once again reversed its policy on whether eggs are good or bad, and sent the unusual stand that eggs were "eeeeh, whatver".

The Freak Power party won the governorship of six northern states, along with 32 seats in the House of Representatives, and 6 Senate seats proving how unpopular Johnson had become.

The Democratic Party approached LBJ with a demand that he commit ritual suicide. LBJ was quoted as saying, "Is Paris burning?" That elicited a few laughs and the Dem leaders skittered off frolicking and giggling and pinching each other to various protests of "I swear I'm not gay" followed by more pinching and giggling. After they controlled themselves they made a plan that Johnson would commit ritual suicide and run a fall guy against Richard Nixon in exchange for forcing Lady Bird Johnson enter therapy for her attempts too assassinate Arthur characters. LBJ agreed.

Robert Kennedy, Sr., JFK's little brother and a master ninja, snuck into the White House and attempted to kill LBJ in his sleep. LBJ awoke from his sleep, bitch-slapped Kennedy, and asked him what the fuck he thought he was doing. Kennedy slunk away and refused to answer. LBJ stood him in the corner of the Oval Office for an hour and sent him home to Boston without any supper.

In 1968, LBJ addressed the nation via television announcing he wouldn't run for re-election.

In his address, Johnson screamed, "Ha motherfucker! I won the fucking bet! I killed the President, took his job, free the negroes again and created a bunch of worthless welfare programs then got the nation ass-deep in a war fighting over a chunk of land so worthless we wouldn't even stolen it from the butt-fucking red savage commie bastard hippie slob alcoholic Native Americans. Oh, and I usurped the Empire of America. Pay Up!'"

Johnson then told America, "Tough shit. Clean up my mess. I'm getting the fuck out of here in January before the police show up. If they ask, tell them I'm ass-raping Kennedy's wife. If they ask which one, tell them the wannabe! 'cause y'all be fuckas, dood!"

Bobby Kennedy eventual went on to win the Democratic primary in 1968.

However, Hubbard and LBJ were not done making drunken bets. Hubbard decided to go double or nothing, betting LBJ that he couldn't kill Bobby Kennedy in public with Saran Wrap and never face trial for it. LBJ took him up on the offer.

He paid the Mossad and the Mafia to get a mentally-ill sitar player named Ravi Shankar to hire a man named Sirhan Sirhan to kill Bobby Kennedy with a sheet of Saran Wrap.

Amazingly, over 300 people stood by while Sirhan smothered Bobby Kennedy for 40 minutes! A Congressional inquiry from 1970 concluded that no one would risk their life just to save a filthy fucking Irishman, thus closing the book on the saddest chapter in American history.

In the presidential election Richard Nixon defeated the fall guy easily with some help from George Wallace and Lady Bird entered therapy until she was committed in the 1980s then breaking out in 1995.

During his presidency, Johnson was twice honored as Time’s Man of the Year, once for his incredibly shady handling of the investigation of the Kennedy assassination and once for being the last incumbent U.S. President to lose his own party’s primary.

Johnson agreed too one last bet with Hubbard: assasinate Nixon without any help whatsoever by breaking into the White House. Johnson agreed and on January 22, 1973, LBJ walked into the White House, jumped up and down on Richard Nixon's desk and drew a loaded gun on Secret Service agents. Johnson was gunned down by Spiro Agnew, resulting in yet another dreary Presidential funeral.