UnNews:Hippies: "You all need to stop farting" 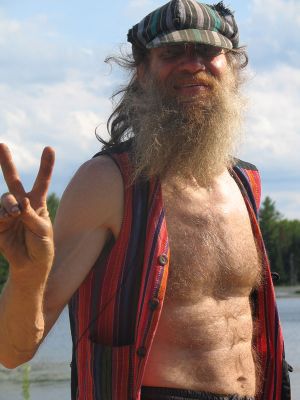 MELBOURNE, Victoria -- A hippie visits Melbourne today to express his opinion about global warming. The 28-year old man came all the way from the United States of America to Australia regarding the current political campaign of Australian politicians for the new leader of the state of Victoria. Wearing a eye-striking colourful outfit and animal's fragrance, Rogerio said, "You all need to stop farting, otherwise I cannot feed Alicia (Peacemy's pig) anymore."

The Premier of Victoria, Steve Bracks is also invited in the meet and greet with the American because of his deep concern about global warming. "We do realise the importance of farting, but the hippie is very convincing, thus I will stand for him, with all my soul," states Bracks. However, the opposition leader, Ted Baillieu thinks the idea was a "complete joke and rubbish" and the citizens of Victoria would not agree with the policy. "Well, we are all concern about the global warming thing, but, consider our human nature, and I admit I fart a lot, and I believe YOU too," says the 52-year old leader.

Based on the recent research, flatulence is indeed one of the most significant reasons of global warming, with 10% of contribution. The rate of flatulence eacy week has gone up gradually and thus making the situation even worse. New Zealand and Australia are the two most affected countries by farts, with 60% and 14% of the air made up from farts.